There’s a little bit of down time during Sunday football and before the fUCLA game next week, so here’s a closer look at some of the plays Cal ran against Utah with one of their variants of the jailbreak screen involving Keenan Allen.  I noticed that Cal ran this play twice and a counter or two off of it in the first half yesterday so I’m going to take a look at that while keeping in mind AERose’s questions: "Wonder if it was just safe playcalling, something that the offensive staff identified ahead of time, or just a play that Tedford liked and wanted to go back to after the first try or two"

This week’s gameplan added a wrinkle in there to the WR screen game and I will show that with some groovy pics and vids after the jump.


I only watched the first half again so I will be commenting solely on a series of screen plays run out of the same formation using Allen as the centerpiece during that part of the game .  In the first half, there were two other types of screens that Cal ran with Allen but breaking those down would not make for interesting reading.   Why did Cal appear to keep going back to screen play to Allen?  I’m going to go with it was something the staff identified ahead of time and it was an option to get the ball into Cal’s best playmaker’s hands and use him as a decoy.

It was known going into the game that Utah had one of the better defenses in the country with a very stout and physical front seven.  ManBearCal provided us with a bunch of Utah’s defensive stats before the game to back that claim up and there were numerous quotes from the Cal staff over the course of the week that spoke highly of the challenge they would face going up against the Utes’ defense.  As I noted from watching previous Utah games, they were very good at stuffing the run, getting pressure on the QB, and liked to keep the offense guessing on 1st down.  What is one of an offense’s best friends to slow down an aggressive and successful pass rush?  Screen plays.  I didn’t pay close attention to the coverages Utah ran before yesterday but after reviewing the WR screen game in first half, they played a lot of man coverage.   I like where this story is going.... 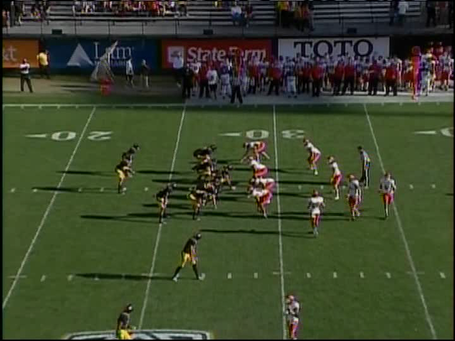 The yellow lines and circles show where the players will end up after shifting.  I have also numbered the defenders on the field which will come into play shortly.  If you have a hard time seeing the numbers, click on the pic and you will get a larger one to view. 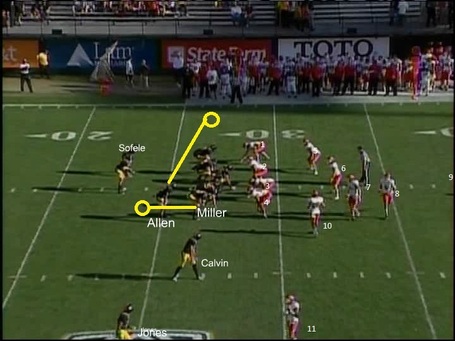 After the shifts, the things to note are that Utah is in man free (1 high safety) coverage, this formation poses the threat to run the zone read, and Allen is now on the weakside of the formation.  Right before the snap: 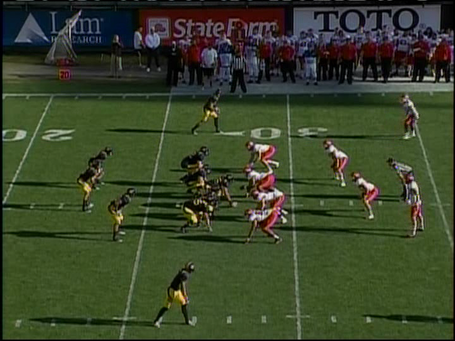 After the snap, Maynard is looking right which moves linebacker numbered #7 and most likely the free safety (not pictured but you can see his shadow) numbered #9 with his eyes away to clear out some space for the area the ball will be going towards.  Utah rushes 4 but defender numbered #5 bites hard.  At the top of the screen, you can see Sofele going out on what appears to be a route but he is actually heading towards Allen's man defender to block.  Note the huge cushion of space Allen's defender is allowing him. 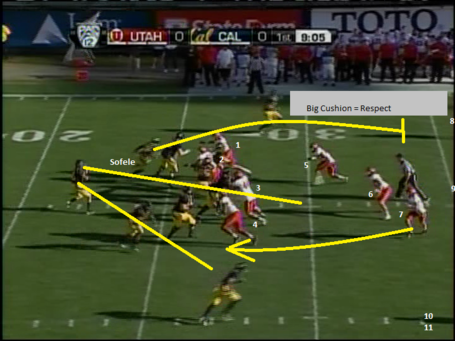 As Maynard looks back to make the pass to Allen, the Utah DE gets into the passing lane and bats the ball down.  LT Mithchell Schwartz tried to cut block the defender numbered #1 below but the Ute successfully stayed on his feet and wrecked the play.  Note that had this pass been completed, Cal had 4 blockers headed downfield and Utah only had four defenders on the weakside. Every defender  was accounted for with a blocker and there was plenty of green for Allen to pick up some major yardage. 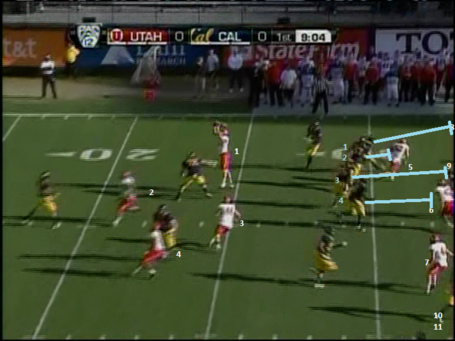 Here's the second play that builds off of the play above. The same pre-snap shifting and formation is used but what is drawn up post-snap is very different.  This play was added in to use Allen as a decoy as well as to help out with the red zone woes. 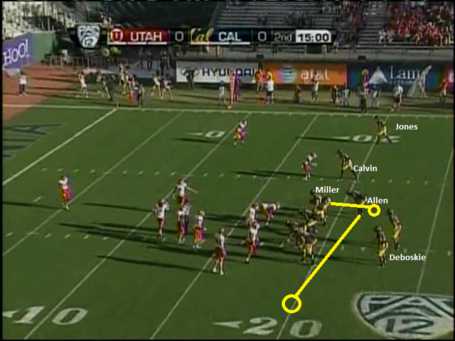 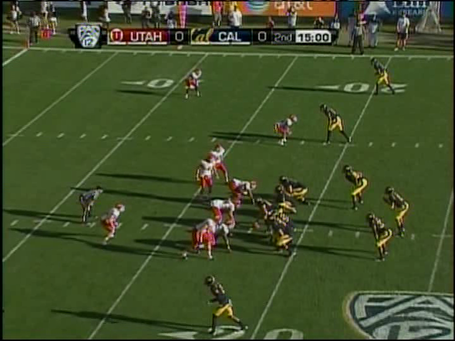 At this point, the keen eyes will tell you that Utah is in man free coverage on a 1st and 10 (same coverage as in the previous play above) so drawing up the same play as above could yield good results if the ball gets into Allen's hands.  Here's the wrinkle in this play.  After the snap, Deboskie heads down field in what appears to be a block on Allen's defender, Allen stops and waits for the pass, and Maynard keeps his eyes on Allen.  What I circled below is actually Maynard pump faking to Allen in attempt to draw the defense to Allen and Deboskie is running a route to the end zone. 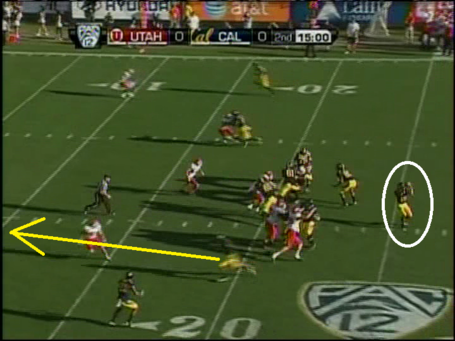 In the picture below, you can see Allen flailing his arms trying to draw the defense's attention to him while Maynard peeks downfield to look if Deboskie is open.  Utah rushes 5 initially and a 6th guy heads in once he realizes his man (Miller) is staying in to block. 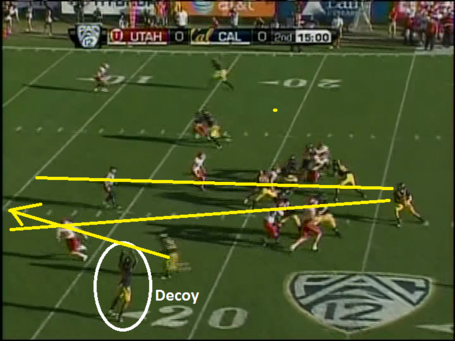 Utah does not bite on the pump fake and Maynard sees that Desboskie is double covered so he checks down to Allen for a gain of 12 to the Utah 6.  Good choice by Maynard to opt to his outlet to move the chains for another 1st down.  I want to emphasize here that the appearance of Deboskie making a block is designed to get his defender to bite on Allen and for Allen's defender to attempt to fight off the block while Deboskie slips behind them. 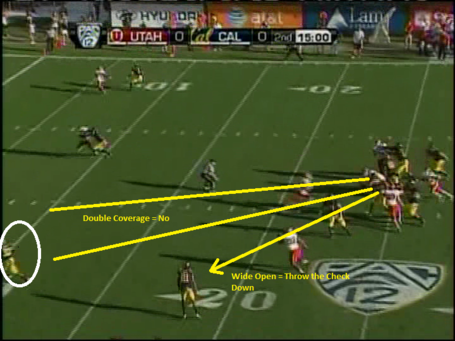 This wrinkle obviously did not work out the way it was drawn up and it would have been interesting to see what would have happened if it did.  I think one of the Utah defenders was in the wrong coverage which actually helped them out.  At this point, who cares!

For the video lovers:

The last play that we will look at was on the final drive of the 1st half for Cal.  Cal was in it's 2 minute hurry up offense so all pre-snap shifting and motion window dressing was not used in this play.  This is the exact same play as I highlighted in the first one in this post so I'll make it quick.  TV angles were bad so it was a little bit tough to see everything so as a bonus, I let the video run long so you can enjoy that. 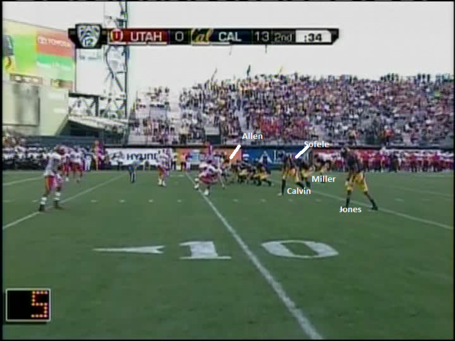 Same pre-snap formation as the previous 2 plays I highlighted with Calvin, Jones, and Miller on the strong side of the formation and Sofele and Allen on the weakside. 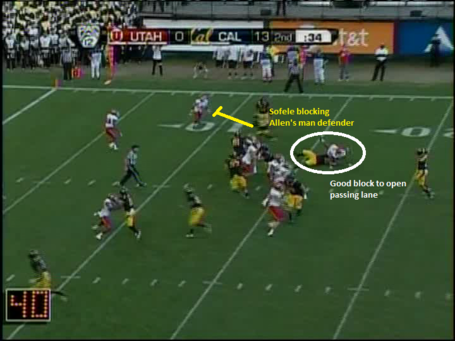 It's 1st and 10 again and the defense is playing man coverage with no safety  help and they sent 6 pass rushers so there was really nobody to look off.  No biggie but I watched the whole play and judged Maynard's execution with an A grade.  After the snap, Maynard looks to Jones and Calvin's side to throw the defense off.  As you can see above, Summers-Gavin nailed his cut block to open up the passing lane for the throw.  Sofele put a good block on Allen's man while drawing his own defender away thus opening up more space for Allen.  There was ok blocking by the OL on this play but the real standout was Allen taking it in while dragging a defender with him.

Superman without his cape on taking the ball in for a TD:

This series of plays was drawn up to take advantage of the pass rush, man coverage, and aggressive defenders.  All 3 of these plays were run on 1st down and targeted the weakside.  Two of the plays were run inside the red zone where it appears Utah was a bit more aggressive on 1st down and Cal probably caught that on film.  These were good playcalls to take advantage of this fact.

In conclusion, this post further demonstrates the importance of watching game film and execution by all 11 guys on the field.   The first play demonstrated good blocking but one execution error.  The second play showed good blocking, a decoy doing his job, a QB making his reads, and a good decision to check down.  The third play showed near perfect execution minus some of the blocking and superb effort overall.

Cal has been running a few other things that I would like to post about if I get the time so stay tuned.