After three straight losses -- all of them conference losses -- the California Golden Bears got their first win in more than a month on Saturday afternoon. Behind a stout defensive performance and an efficient game from quarterback Zach Maynard, Cal clobbered the Utah Utes, 34-10, at AT&T Park in San Francisco. With the win, the Bears (4-3 overall, 1-3 Pac-12) picked up their first Pac-12 win of the season, while conference newcomer Utah (3-4, 0-4) remains in search of its first league victory since joining the Pac-12.

The story of this game was expected to be the defenses. Utah and Cal came into Saturday's game second and third, respectively, in the Pac-12 in total defense. Couple that with the fact that both offenses had their share of struggles in recent games and -- well -- many of us expected a relatively low-scoring game where turnovers would make the difference.

As it turned out, the game was low scoring and there were turnovers -- by Utah. The Utes turned the ball over four times (to none by Cal) and did not score until the fourth quarter, after spotting the Bears the first 34 points of the game. And the fact that the Bears outgained the Utes 384-178 in total offense does not even begin to do that statistic justice. Utah racked up 120 of its 178 yards of offense after falling behind 34-0.

It was, quite simply, an unexpectedly dominating performance by Cal.

A blowout win was probably not something most Cal fans expected after the first quarter of play. Neither team's offense could get much going. In particular, it looked like it would be rough going running the ball, as both front sevens seemed to control the line of scrimmage.

It was Cal's offense that finally broke through on a drive that straddled the end of the first quarter and the beginning of the second. Cal running back Isi Sofele drew first blood against his home state, capping a 12-play, 77-yard drive with a 5-yard touchdown run on 3rd-and-goal. But that was only the beginning of what eventually became a 20-point onslaught by the Bears in the second quarter.

Cal's defense was the catalyst of the onslaught. On the first play from scrimmage after the Sofele touchdown, Cal defensive tackle Aaron Tipoti forced a fumble by Utah quarterback Jon Hays (the first of four turnovers comitted by Hays in the game). Cal safety D.J. Campbell recovered at the Utah 27-yard line, which led to a 35-yard field goal by Giorgio Tavecchio to make it 10-0 Bears.

After another Tavecchio field goal made it 13-0 with 1:12 left in the first half, the Utah offense finally found itself in Cal territory, aided by two personal-foul penalties. But on first down from the Cal 30-yard line, the game took a sharp turn in favor of the Bears. Mychal Kendricks intercepted a Hays pass and returned it 32 yards to the Utah 42-yard line. So instead of the Utes getting at least three points and seizing some momentum, Cal had one more scoring chance with 42 seconds left in the half.

The Bears took advantage in just two plays. Cal quarterback Zach Maynard first found Marvin Jones for 30 yards to the Utah 12. From there, Maynard hit Keenan Allen on a flanker screen and Allen did the rest, taking it to the house. Just like that, Cal had a 20-0 halftime lead.

The second half did not prove to be more promising for the Utes. Cal forced a punt on Utah's opening possession, then proceeded to grab the game by the throat. The Bears' first possession of the second quarter was a methodical 11-play, 87-yard drive that took 4:51 off the clock and a whole bunch of wind out of the Utah sails. Maynard rushed for 24 yards on the drive, including the last four on a quarterback keeper for a touchdown that gave Cal a 27-0 lead. 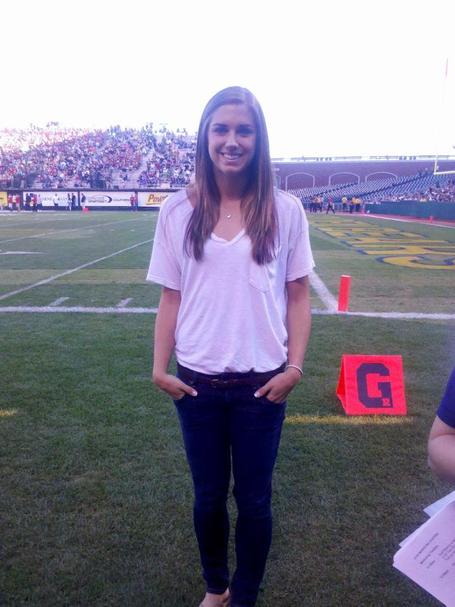 The reported attendance at AT&T Park was 35,182, which included Cal alumna and Team USA soccer star Alex Morgan.
Appropriately given their dominance, the Bears' defense put points on the board themselves later in the second half. Josh Hill intercepted Hays on the first play of the fourth quarter and returned it 32 yards for a touchdown. The pick six gave the Bears a 34-0 lead and the only suspense remaining was whether Cal would get its first shutout since the 2005 season. Alas, Utah would score twice in the final quarter to end that possibility, but even that cannot diminish what the Cal defense did on Saturday. While Utah certainly suffered from the absence of starting quarterback Jordan Wynn (lost for the season after shoulder surgery), the Bears' defense nonetheless showed signs of continuing to build upon the positive signs it showed in the loss to USC in Cal's last game.
Though the Cal defense was the main story of the game, Maynard's performance should not be overlooked. Cal's much-maligned quarterback was good with both his arm and his legs. Through the air, Maynard completed 19 of 29 passes (66 percent) for 255 yards and a touchdown, and did not throw an interception; on the ground, Maynard ran for 36 yards and a touchdown. All told, Maynard racked up 291 yards of total offense -- 113 more than the entire Utah offense.
More important than anything else: it was a win for the Bears. Cal has one in the win column in Pac-12 play and is one step closer to bowl eligibility with winnable games against UCLA, Washington State, and Oregon State coming up.