CAL WINS IT, 34-10. CLICK HERE TO JOIN THE DISCUSSION ON THE POSTGAME THREAD

To look back the the fourth quarter open thread, click here

To look back at the halftime/third quarter thread, click here

To look back at the second quarter thread, click here

To look back at the first quarter thread, click here

After two Thursday night games in a row, the California Golden Bears return to action for a conventional Saturday game. The Utah Utes (3-3, 0-3 Pac-12) roll into San Francisco, seeking their first conference victory since joining the Pac-12. The Bears aren't in any position to sympathize with the Utes' winless Pac-12 ways: Cal (3-3, 0-3 Pac-12) is also in search of its first Pac-12 win of the season, having dropped three in a row to start conference play for the first time since 2001.

So let's see here: two teams winless in the Pac-12, playing in an off-campus baseball stadium venue, with one of the teams coming off two lopsided losses on national television in consecutive weeks. No wonder none of the major Pac-12 football television partners picked this one up. But hey: something has to give today, right? One of these teams is going to get its first Pac-12 win of the season. For the psyche of the Golden Bear faithful and for the sake of righting the ship toward bowl eligibility, please let it be the Bears!

This post is your official pregame open thread. Talk about the Cal-Utah game here and watch for the link to the first quarter thread as the opening kickoff draws near. Discuss other games on the Saturday morning and Saturday afternoon/evening open threads.

RELYING ON THE INTERNETZ TO WATCH CAL VS. UTAH?

Jeff Tedford is 0-2 against Utah during his ten years as Cal's head coach. The Bears lost to the Utes 31-24 in Salt Lake City in 2003 (when Urban Meyer coached Utah) and then fell to the Utes again 37-27 in the 2009 Poinsettia Bowl in San Diego. Today marks Utah's first trip to the Bay Area to take on Cal since the 2000 season opener, which the Kyle Boller-led Bears won 24-21 in Berkeley.

Both teams have had their problems on the offensive side of the ball this season. What can we expect from Utah's defense against the Cal offense? norcalnick previewed the formidable Utah defense, which will pose a challenge for Keenan Allen and Co. today:

That's a pretty scary number, but it's not completely hopeless. Utah has had some completely dominating performances (like holding Pitt to 2.3 yards/carry or BYU to .5 yards/carry) but USC was able to find some success on the ground and Chris Polk blew up for 189 yards on 6.5/carry. Of course, Isi Sofele isn't Chris Polk and Cal's offensive line, improvement and all, still probably isn't as good as USC's offensive line. And considering how Cal's passing attack has looked for the past few weeks, would it surprise anybody if Utah lines up with eight in the box, daring Cal to throw the ball?

Not quite as scary, but also pretty good. Not surprisingly, Barkley, Osweiler and Price all outperformed 6.4 yards/attempt while BYU, Montana St. and Pitt did not. So ask yourself: Is Zach Maynard closer to the first three, or closer to the latter three? For what it's worth, Robert Woods managed eight catches for 102 yards, so I would expect Mr. Leading-WR-in-the-nation Keenan Allen to get his yards and catches. The question is if his production will be complimented with production from the running game or from other receivers.

As mentioned above, Utah is good at preventing long gains. That implies that space is open to dink-and-dunk your way down the field underneath. I'm not convinced that's something our offense is capable of doing consistently, although we did it against inferior defenses in Washington and Colorado. 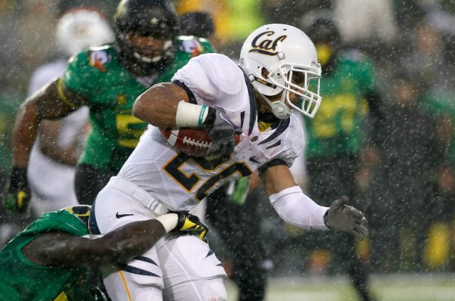 Cal running back Isi Sofele, a native of the state of Utah, looks forward to taking on the Utes

As for the Utah offense that Cal will have to contend with, ManBearCal gave a preview of what we can expect to see today. Utah's success on offense might come down to the play of running back John White IV:

After losing their two leading rushers from the 2010 season, White has been a pleasant surprise for the Utes...rushing for 671 yards and 6 TDs in six games this season. He really showed up last week at Pitt, toting the ball a remarkable 36 times for 171 yards. He's a little feller though, so don't expect him to be able to handle that kind of workload consistently. Still, he's good for about 20 carries a game, with mixed results. He was fantastic against Montana State, BYU and Pitt (6.42 ypc)...but was essentially shut down against SC and Washington (2.67 ypc). Still, he runs hard between the tackles and has the kind of quickness you'd expect from a guy who looks...small and quick. If given holes to work with, he can make some things happen. He's been almost a one-man show in the Ute running game though, as Utah's two hefty Polynesian RB's, senior Tauni Vakapuna and freshman Harvey Langi, have been either dinged up or ineffective in the snaps they've seen. Both guys are over 225 pounds, but if their job is to be pile movers, they've really just been piles. Vakapuna has an injured ankle, so its more likely Langi plays the role of the bruiser, if needed. Still, White is the guy here.

Facing the Utah Utes has been no picnic for the Bears in the recent past, and we should expect nothing different today. Utah will undoubtedly come into AT&T Park with a sense of urgency, trying to get its long awaited first victory in its new conference. After dropping their first three Pac-12 games to teams near the top of the standings (at USC, Arizona State, Washington), the Utes probably see this game against Cal as a prime opportunity for a win. Cal, which has also dropped three games to good Pac-12 opposition (at Washington, at Oregon, USC) will have to match that sense of urgency and improve its offensive execution if it is going to avoid going 0-4 in Pac-12 play.