Ok, maybe I didn't make it into first.

And before I forget, CALumbus Bear won this year's fantasy baseball league after my team sucked it in the playoffs. A routine occurrence. Mayhap you can take your victory lap in the comments.

Starting that trudge back up to the top of the Awesome division. 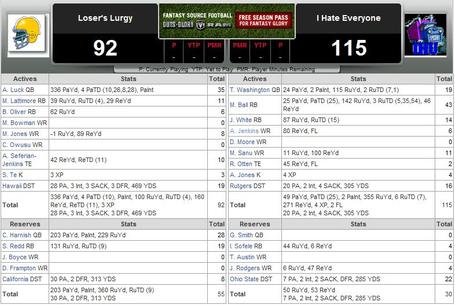 Loser's Lurgy continued in its death throes, falling to I Hate Everyone by a count of 115-92. Tevin Washington managed 19 points despite having a passing day that makes Rex Grossman look like Tom Brady, and Montee Ball carried the day amassing 43 points because he's just that damn good. Andrew Luck came through for the Losers with 35 points, and I just now noticed that he had San San Te as his kicker. That's a problem right there. 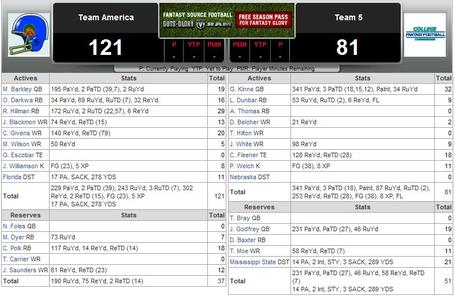 Team America triumphed over the faceless Team 5 121-81. Greg Kinne finally suited up and played, putting a reasonably astounding 32 points for a guy whose name I always remember but never actually see play. Nor do I have any idea what team he's on. Coby Fleener once against proved his worth as the king of the three tight end monster out on the Farm, but they were not enough to overcome the balanced attack used by Team America and Matt Barkley. 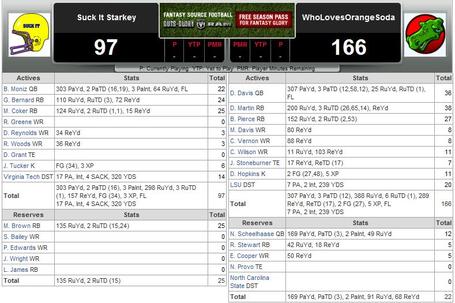 Who Loves Orange Soda absolutely pounded Suck It Starkey 166-97 in a week where Starkey was down two of his roster players. Not that it looks like it would have matter much, as half his team was on a bye. Who knew. Dom Davis bounced back with 38 points for the Soda Poppers, and Doug Martin and Bernard Pierce combined for 65 points as well. 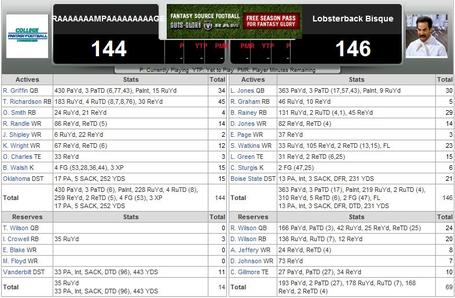 Lobsterback Bisque slipped by RAAAMPAAAGGEE in the closest matchup of the week, 146-144.Landry Jones, the Boise State defense, and Sammy Watkins all contributed to the winners, while Trent Richardson and Robert Griffin III just didn't get quite enough out of their supporting cast to overcome that two point deficit. 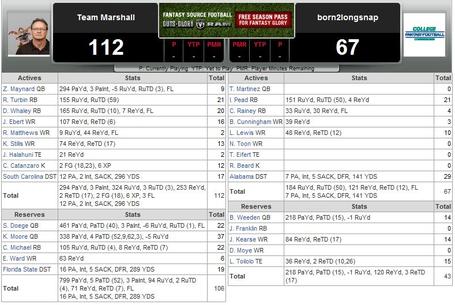 born2longsnap got Marshalled by Team Marshall 112-67. That'll happen when Taylor Martinez is off on a bye along with your top WR, TE, and K, although even had they been substituted in, they would have lost by 2. So maybe it's better this way. 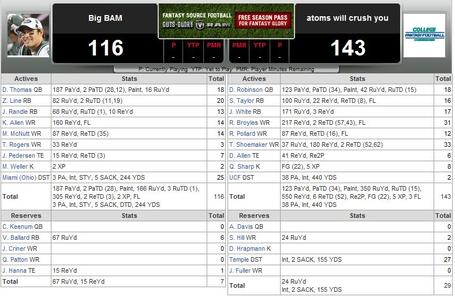 atoms crushed Big BAM 143-116 on the strength of huge games from Ryan Broyles and T. Shoemaker (who?) while Denard Robinson wasn't his usual magical self. Big BAM got reasonable efforts from most of its players, but didn't have any superstar performances this week to get the victory.