Cal Football: A Golden Spotlight on the Goal Line Stand Against the USC Trojans

Share All sharing options for: Cal Football: A Golden Spotlight on the Goal Line Stand Against the USC Trojans

It's a little hard to do a best and worst when there were so many turnovers or near-turnovers to chose from.  Not to mention that fake punt which a worst play of the decade candidate in and of itself.

Instead, let's focus on one of the bright spots:  our slowly improving defense.

Here's the situation.  After Keenan Allen fumbled on our first possession, USC completed a long pass to Marquise Lee to put them 1st and goal.  Cal was in Cover 2 and playing pass coverage.  Williams was in good position, but Cattouse was late coming over and Barkley made a perfect throw.  A score here could be a huge blow to morale and harken back to last year's utter collapse.

USC goes with 21 personnel, 2 backs, 1 TE, 2WR.  They have an offset I, and motion their TE creating a strong formation left.  Uber-5-Star frosh George Farmer is the tailback.  Cal looks to be in a Cover 1 look with a 5 man front, one safety in the box, and one staying slightly deeper. 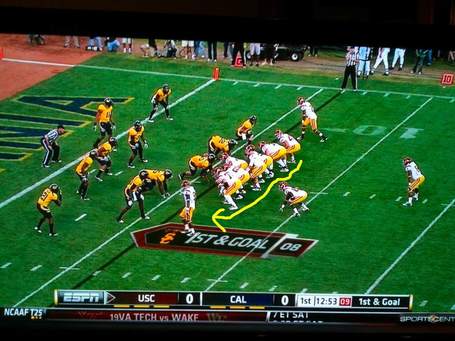 Barkley pitches to Woods.  Their WR(Lee) and TE(Ellison) block down while they pull two linemen.  It's a deliberate attempt to take advantage of Cal's youth by attacking the edge covered by true frosh McCain and McClure. 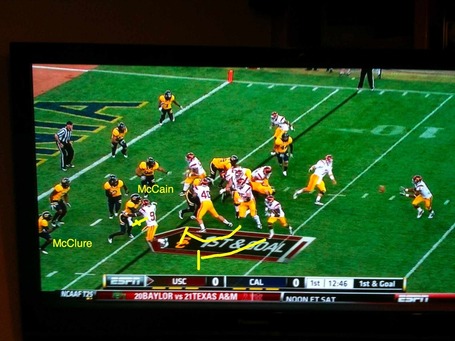 Cal shows good gap discipline and flow towards the ball.  Holt, Kendricks, and Owusu close down any cutback lanes.  McCain disengages from their WR.  McClure comes up in run support and engages their TE. 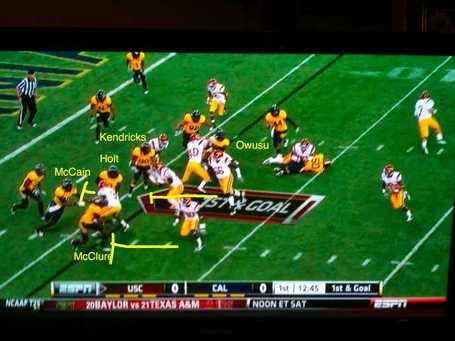 McClure slips by their TE and cuts off the outside.  McCain makes a great burst upfield and tackles Farmer for a loss.

Burning a redshirt for a -4 yard gain?  Priceless. 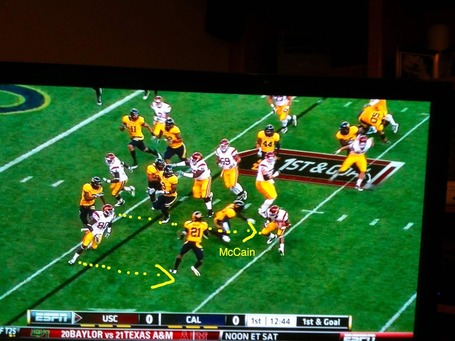 2nd and goal.  USC stays with 21 personnel and has a strong look left with their TE and offset I.  Cal counters with a Cover 1 look and five man front. 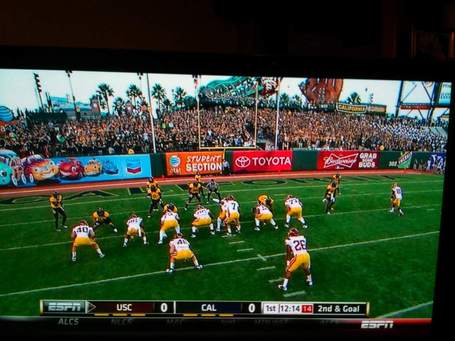 Although it looks like a power set to the left, Barkley looks right to Lee on the slant.  Meanwhile, McCain uses an outside move and appears to beat their tackle. 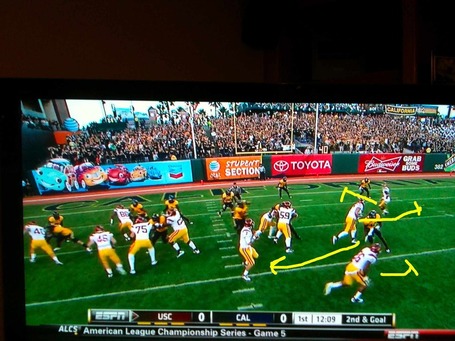 But it's a designed swing pass screen.  Their tackle heads downfield while Barkley lobs it to the tailback.  Lee stops his route and picks off Kendricks.  It's a Cal tradition to be absolutely burned by this play.  'sc has scored countless touchdowns with it over the years. 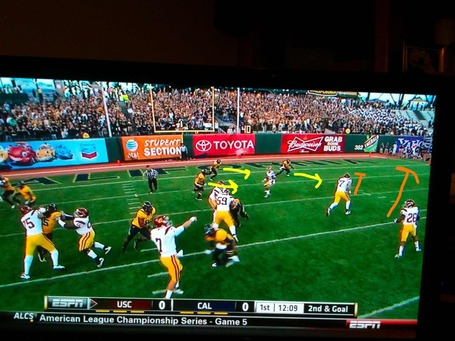 It looks like Tyler has a free lane to the endzone.  Their tackle looks to wipe out Williams and clear the way.  This is another clever attempt to use misdirection to attack the edge against our inexperienced OLB and our smallest CB. 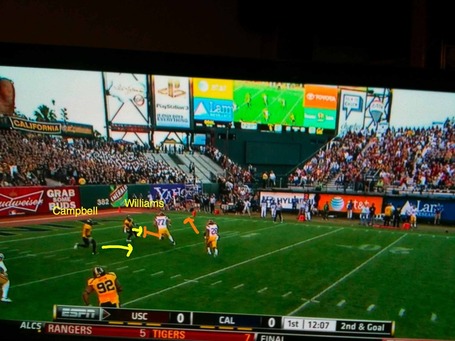 But despite giving up 200+ lbs, Williams will not be denied.  He slips the tackles block and cuts off the sidelines.  This allows Campbell to catch up and drop Tyler for little gain. 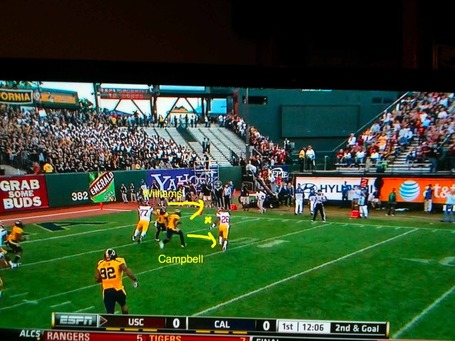 3rd and goal.  USC goes 11 personnel.  3 WR, 1 TE, 1 back.  Cal counters with their nickel look.  Holt stays in the middle, Kendricks moves to the outside with Wilkerson on the opposite side.  Hill lines up against their slot WR.  One safety(Cattouse) shades towards Woods.  Campbell shades towards Lee.(off-screen) 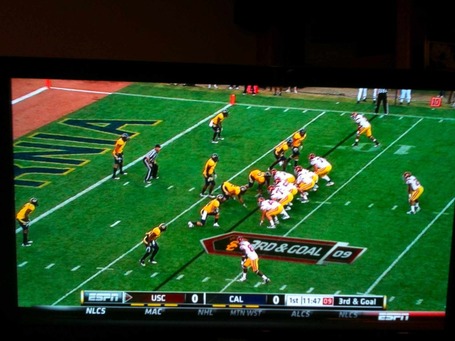 Coach Pendergast rolls the dice and calls an all-out blitz.  For those of you clamoring for more pressure, feast your eyes on a seven man rush including a corner (Hill), both OLBs (Kendricks, Wilkerson), and Holt on a slight middle dog. 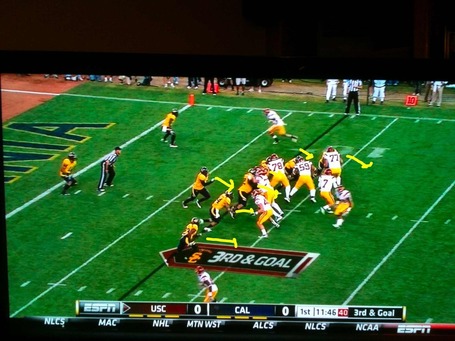 'sc's tailback has to decide whether to block Hill or Holt.  He chooses Hill. 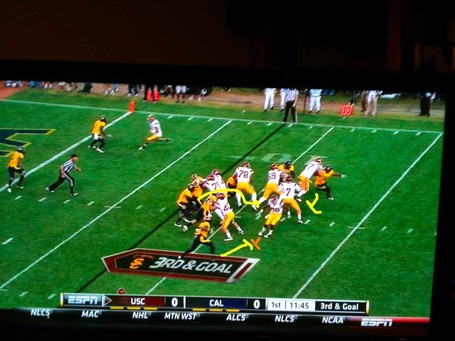 Barkley pump fakes trying to set up a hitch and go.  Woods pushes off and heads towards the corner.  Not only does Williams not fall for the fake, he fights off hands to the face and remains in Woods' hip pocket.  Meanwhile, Holt's pressure forces Barkley to throw early. 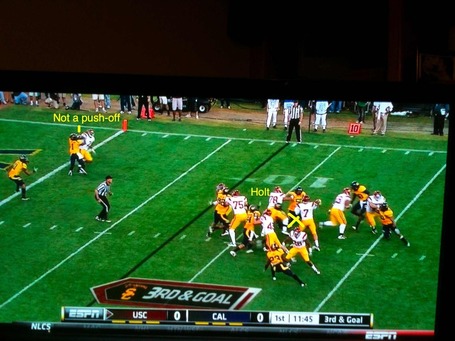 The throw sails high and wide.  This is a combination of great coverage with pressure.  More please! 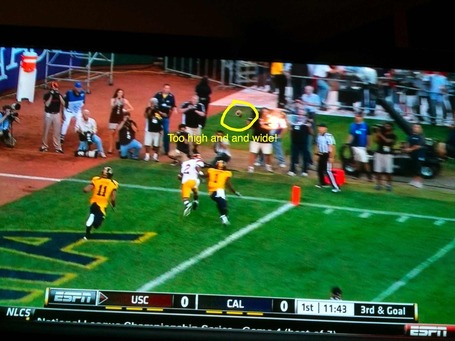 Kiffin decides to be really clever and lines up in a quasi-fake-field goal formation.  It might have been trickier had their kicker actually been on the field. 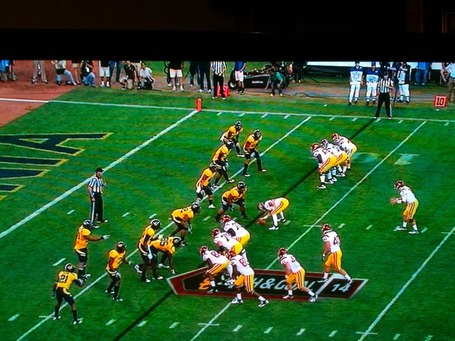 Their center throws a legal but atypical sideways snap to wing TE, Ellison.  The snap is low and offline.  (I cannot confirm nor deny that the Trojan center hangs out and trains with Galas during the offseason...) 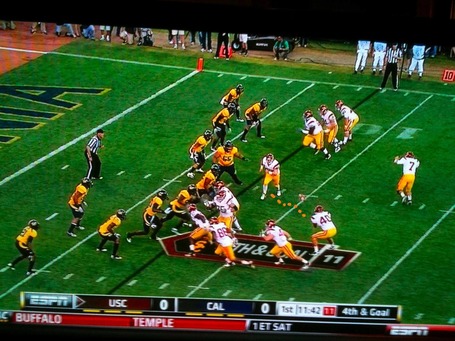 Ellison shows why he was switched from TE to FB by dropping the snap. 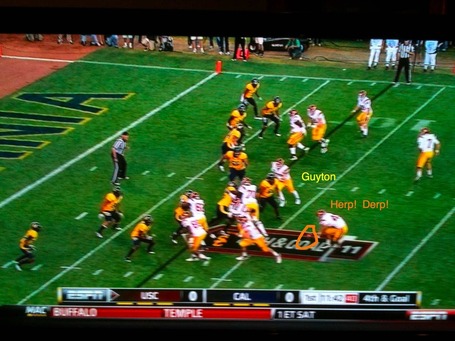 Although 'sc has two blockers out in front against two Cal defenders(Kendricks, McClure), Guyton crashes in and recovers the fumbled snap. 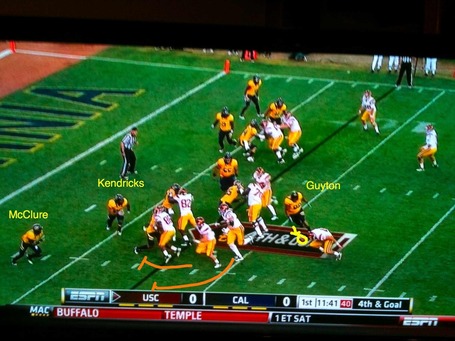 Overview:  'sc had a clear plan from the outset to attack the edges of our defense.  Coming off a sudden and disappointing turnover, it would have been easy for our guys to get punched in the mouth and give up an early score.  Instead, you had our smallest defender(Williams) fight off a lineman, great plays by true frosh (McCain, McClure), and heady plays by veterans. (Campbell, Holt)  Although the rest of the game didn't go well, the defense really stepped up here to give us a chance.

1)  Considering his rough debut, McClure really bounced back and played a good game.  He doesn't look like a true frosh out there.  He's more physical than I would have thought and generally plays tight coverage.  When he gets his legs under him, I think he's going to be a great Bear.

2)  It was great to see Wilkerson and McCain growing up before our eyes.  They still make mistakes, but you can see that both of them are starting to get comfortable and are starting to be able to use their athleticism.  A number of Barkley's errant throws were due to pressure off the edges.  That's a promising sign moving forward.

3)  Give credit to Monte Kiffin for a solid defensive game plan.  They started off showing a strong anti-run look, and then mixed it up throughout the game.  Although they're usually a Cover 3 team, they used a lot of Cover 1 and switched to Cover 2 during passing downs.  Like Hydro mentioned, they mixed up Cover 3 and Cover 1 to confuse Maynard with man versus zone coverages.  Another thing they did a lot on early downs was line up their linebacker in slot coverage, then send him on a run blitz.

4)  Tedford's playcalling was actually rather creative and could have done a nice job countering the Trojan defensive calls without all the execution errors.

5)  With another week of shooting ourselves in a foot, I wonder if we're trying to do too many things on offense.  We have spread, pro-set, and pistol formations.  Conceptually, it's harder for the opposing defense to prepare.  But practically speaking, it doesn't matter how many different looks we can present if we can't pull them off.  Although Tedford talked about condensing the playbook during fall camp, perhaps he couldn't help himself from tinkering.  It sure looks like we're using new plays and formations each week.  Perhaps it's time to dial things back and go back to the fundamentals.

6)  It's easy to call for the backup QB.  Heck, I was pulling for Bridgford to start the second half.  But, we don't have the benefit of seeing practice.  If Maynard is steady during the week, and then inconsistent during the games, it would make more sense for Tedford to leave him in.  Let's hope that the light comes on and the game slows down sooner rather than later.

The way we've lost the last two games has been disturbing to say the least, but there's still plenty of football to be played.  Let's regroup and beat the Utes.  Go Bears!