I'm taking over first next week. You heard me.

College Fantasy Football Standings
I really hope playoff spots are determined by the top two teams in each division. 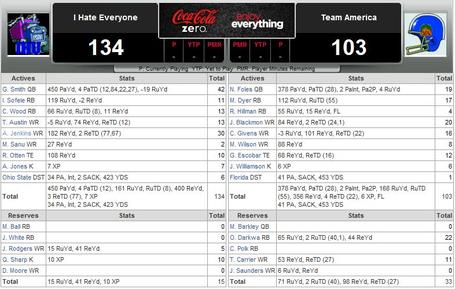 I Hate Everyone hated (Team) America to the count of 134-103. Praise be to Geno Smith and Dana Holgorsen for their prolific ways, and even the much-maligned Isi Sofele chipped in with a good game statistically for me on a week where the dynamic duo of Wisconsin RBs Montee Ball and James White were on a bye. Special thanks go out to A.J. Jenkins too. Team America was led by Justin Blackmon and Nick Foles, but they didn't get the single outstanding performance they needed to get over the top. 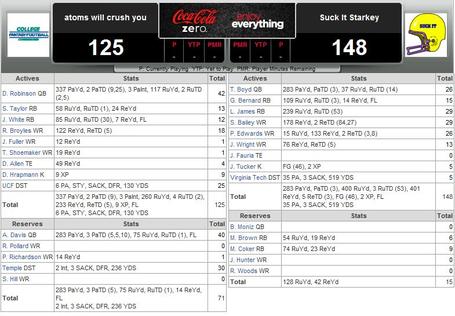 Suck it Starkey crushed atoms will crush you 148-125 behind the amazing Tajh Boyd (I guess), and the Andrew Boguted LaMichael James. I really want that to become a thing. And Stedman Bailey. I knew I drafted the wrong WVU receiver. Denard Robinson did his thing, but when two of your receivers, your tight end, and your kicker combine for a total of 15 points, you're probably not winning that week. 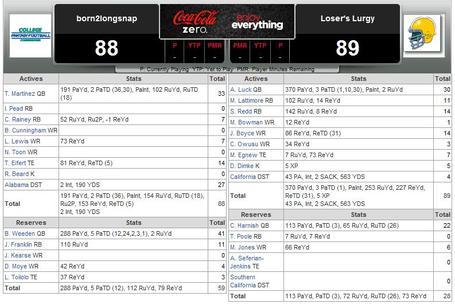 Loser's Lurgy slipped by born2longsnap by the slimmest of margins at 89-88, which is really quite pathetic when you realize born2longsnap had three players on bye weeks. So, you know, it counts as a win in the books, but I want to put an asterisk there. 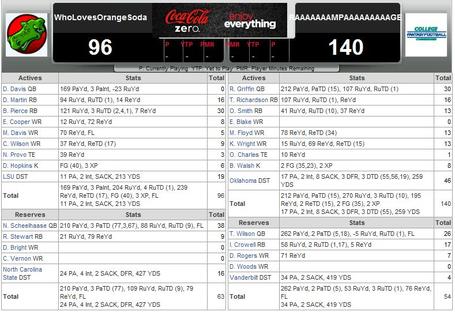 RAAMPAAGGEE stomped WhoLovesOrangeSoda 140-96 despite not getting anything out of its WR1 and a meager 1 point out of its tight end. Its top performer was actually the Oklahoma defense, which had a field day in the Red River Shootout. (I like the un-PC name more.) Robert Griffin continued to be his typical awesome self, while Orange Soda's QB managed to put up a staggering 0 points. And he played. So much for that. 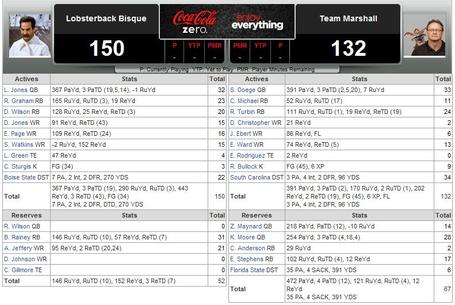 Lobsterback Bisque put up the highest point total of the week in outscoring Team Marshall 150-132. He had a total of seven different performers put up at least 15 points (with two more on the bench), which offset the relatively shabby performances of his tight end and kicker. Alas, 34 points out of the South Carolina defense would not be enough for Team Marshall on this day. 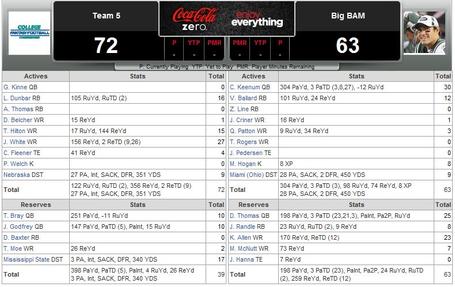