Cal Football: Highs and Lows Against the Oregon Ducks

Share All sharing options for: Cal Football: Highs and Lows Against the Oregon Ducks

We all knew going into this game that it would take an amazing performance to avoid getting blown out, much less pull off an upset.  Unfortunately, after teasing us with a valiant first half, the rest of the game followed the expected script.  We made too many mistakes and wasted too many opportunities.  There's no real shame in being beaten by a better team on their field, but it still hurts to wonder what might have been if the Maynard had played more effectively.

For this week's special feature, let's take a closer look at the best and worst plays of the game.

Up first, the Worst Play of the Game: (Sadly enough, there were plenty to chose from.)

It's 1st and 20.(following a holding penalty)  Oregon comes out in their standard spread formation.  Cal looks to be in Cover Zero with Cattouse playing up close in run support and DJ Campbell playing deep.(possibly spying on Thomas)  The Bears have subbed in Josh Hill for Whiteside as part of their nickel package. 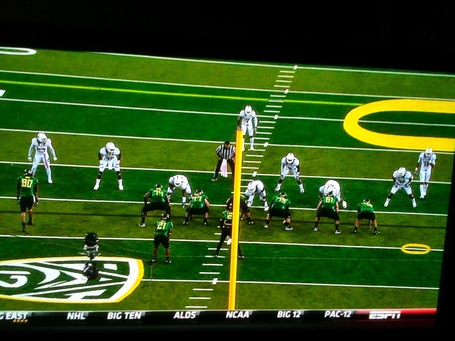 A wide receiver runs behind the formation feinting the reverse or fly sweep.  Thomas reads Owusu and gives it to James.  This might be a designed hand-off all the way because the Oregon linemen are already pulling to the right.  Initially, the Cal defenders stay at home. 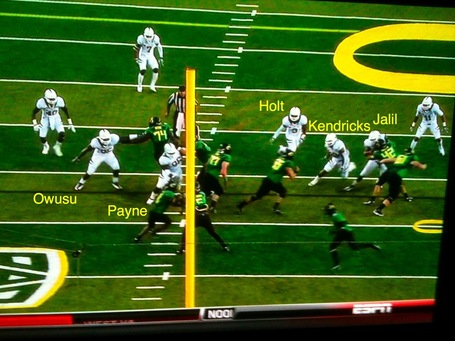 But as the play starts to unfold, Kendricks isn't able to evade the Duck lineman and gets knocked down. 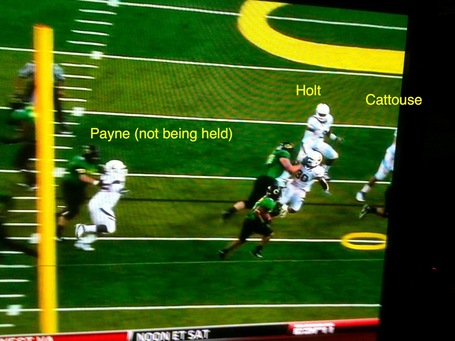 Jalil is being driven backwards and can't get free.  Inexplicably, Cattouse abandons outside contain and moves inside where he bumps into Jalil.  Holt is following the play laterally and also gets bunched up.  This allows two Duck blockers to occupy three Cal defenders and leaves the outside wide open. 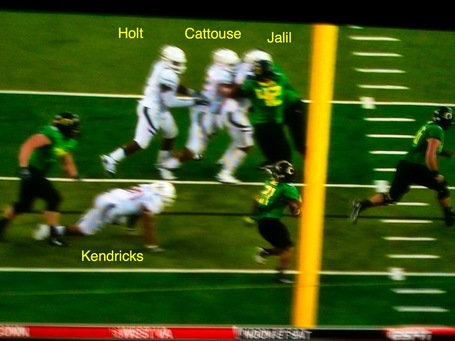 With two senior defenders (who should know better) having effectively taken themselves out of the play, Anthony comes in and takes a dive.  Literally.  Instead of trying to tackle James, he hits the turf to avoid running into the Duck lineman.  James is off to the races until Campbell can knock him out of bounds.  Within a few seconds, we've gone from 1st and 20 to the red zone and their 2nd touchdown.  Not.  Good. 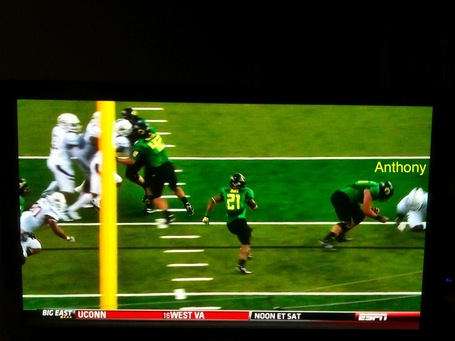 Yes.  The Fail was strong on that play.  Maybe this loss won't hurt as badly once it gets vacated? (I kid, I kid.  Please Nike Overlords, don't stop paying Tedford's bonus.) 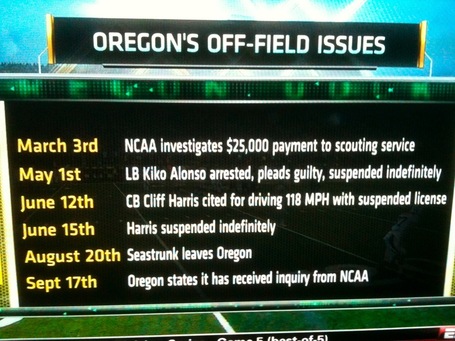 Okay, enough of the pain.  Let's take a look at Cal's Best Play of the Night:

It's 1st and 10.  Cal comes out in 21 personnel(two running backs, one TE, 2 WRs)  Oregon looks to be in Cover One, with a 5 man front, one safety up in run support, and eight in the box.  Cal runs a weakside (away from the TE) off-tackle hand-off.  No pulling.  This is just hat on hat power football. 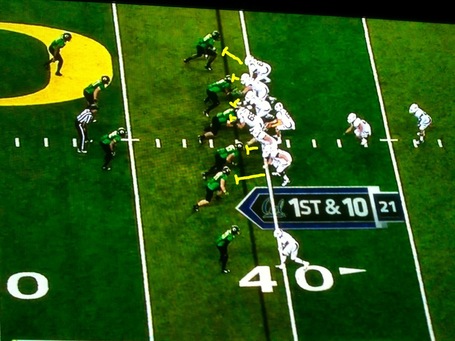 Miller stands his guy up.  So does MSG.  Cheadle and Galas double-team Oregon's nose tackle.  Schwenke clears his guy completely out of the way, and Schwartz seals the edge.  Kapp is free to lead Sofele through the hole. 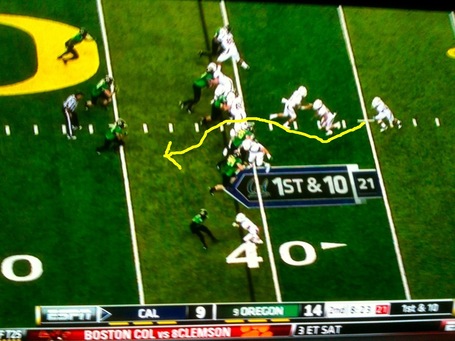 Kapp lays a solid block on the first Oregon linebacker. 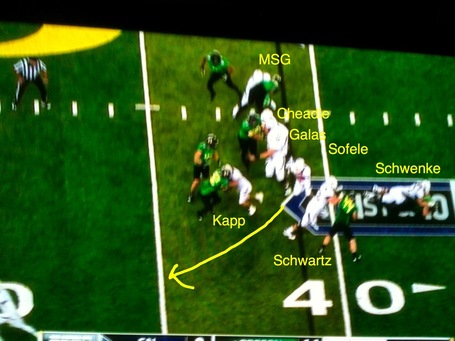 But here is the key to the whole play:  Kapp is able to block both of Oregon's linebackers.  He stays engaged with their OLB and gets in the way of the MLB.  Sofele is free to get to the edge. 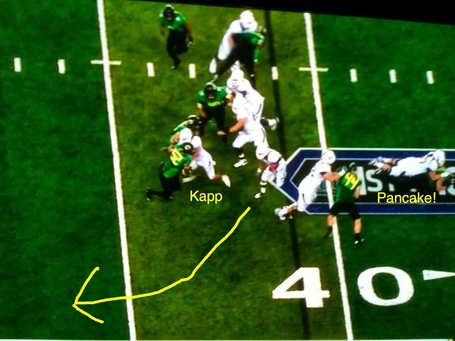 Sofele is able to use his speed to get to the outside. 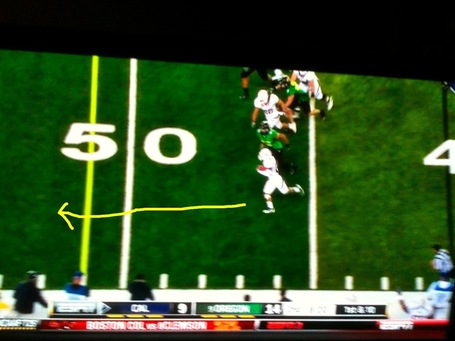 With great timing, Sofele channels his inner Mario and hurdles a defender to get another 10 yards. 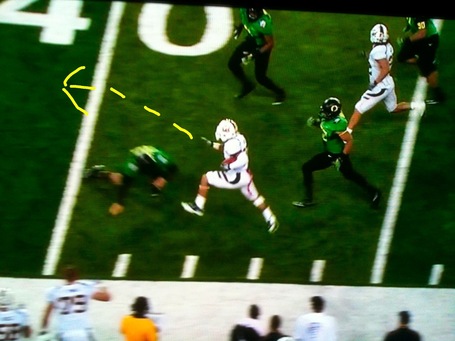 Perfect execution from the big guys, an extraordinary effort from both of our backs, and Maynard didn't miss anyone!

1)  Without a reliable pass rush, I don't see an easy solution to our coverage issues.  Hill just doesn't have the speed to stay with guys, especially if we're going to keep playing a lot of Cover One or Zero.  McClure is going to have to put this game behind him and learn quickly.

2)  Losing Anthony could also be an issue with our perimeter run defense.  He was our best run-support corner.  Williams and McClure have trouble consistently shedding blocks.  Lack of elite safety play + young OLBs = lots of vulnerability on the edges.

3)  I wonder how long Coach Pendergast will go before he considers giving some of the younger players snaps at safety.  Maybe we give Hill some snaps there and bring in one of the young guys (Lee, Jackson?) to play nickel?

4)  TEs and run blocking.  As opposed to the past four games, we rarely used double TE personnel in this game.  I'm curious if this was specifically done to matchup with the Ducks or if the coaching staff doesn't feel that our backup TE (Hagan) blocks well enough to allow us to run power sets effectively.  A few games ago, Hydro noted that we were starting to break tendency by running away from the side where our TE is lined up.  I'm starting to wonder if this is a trend, and not a change-up because Miller more serviceable than dominating as a blocker.

5)  Running tendencies.  I didn't chart this carefully, but it's beginning to seem like we run to the left a lot more effectively than we run to the right.  From what I recall, all of our big runs came out of off-tackle or outside zone runs to the left.  It makes sense because Schwartz/Schwenke are a more effective tandem than Cheadle/MSG.  Also, Cheadle uses his mobility to pull well, but doesn't have the same raw power for driving straight ahead.

6)  Run versus pass.  My first impression was that I also thought it was curious we abandoned the run early in the 3rd quarter.  But on the re-watch, I could see why Tedford wanted to go to the air.  Oregon almost exclusively played Cover One with eight in the box and a safety up close in run support.  They left Jones/Allen in single coverage, but tended to shade their deep safety over to Maynard's first read.(Allen)  In theory, this leaves a lot of real estate to exploit...if your quarterback can make the right read and deliver the ball accurately.  (sigh)

Oregon was also bringing a lot of run blitzes and run stunts.  There's a great explanation on how Dline stunts work here.  They used these on occasion during the 1st quarter, but started increasing the frequency when they realized that Maynard couldn't hurt them with his arm.  During our first trip to the red zone, the drive stalled because our 1st down run to Sofele was a one yard loss, and our 2nd down run to CJ was for no gain.

On 1st down, an Oregon LB blitzes the "C" gap. (between MSG and Miller)  MSG can't pick him off, Miller doesn't hold his block, and Sofele goes down.

On 2nd down, the Oregon has the perfect counter for our inside off-tackle run.  Cheadle steps forward, but the Duck lineman is already stunting into the "B" gap.  By the time CJ gets the ball, he has to try to break outside.  But, Tyndall misses his lead block and CJ has nowhere to go.

In both cases, better execution could have set up 3rd and manageable instead of 3rd and long.

7)  For all of his inconsistent play the first few games, this was the first time that Maynard looked truly rattled.  Because we haven't seen that from him before, let's hope it was an aberration.  It's still too early for a quarterback controversy.

Well, nothing like breaking a losing streak by taking on USC.  It'll be a game for the record books.  Literally.  I think we're going to help immortalize Robert Woods.  But wouldn't it sweet to make Kiffin pout more than usual?  Beat the Trojans!