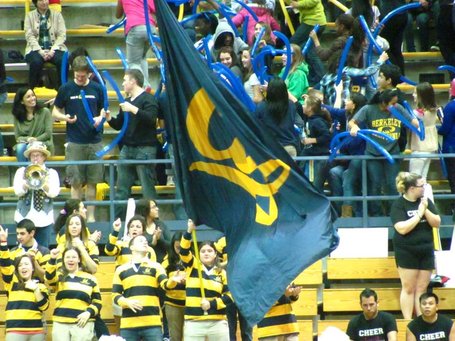 Last time out, we looked at pre-game and first half action.  There was not as much game action as I woulda liked, because Cal was playing to the other side of the Arena.  But now, they were Bearing (ha!) down our way and we hoped an exciting second half was upon us.  Let's go behind the jump to find out more about the second half!  GO BEARS!

After the halftime performances, the teams came back out to warm up. 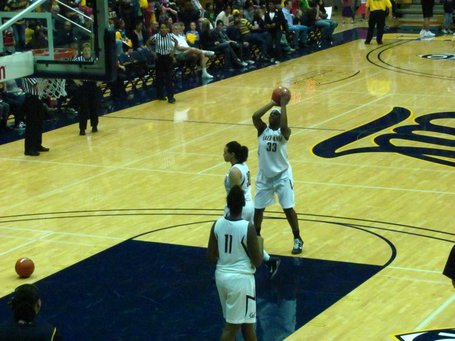 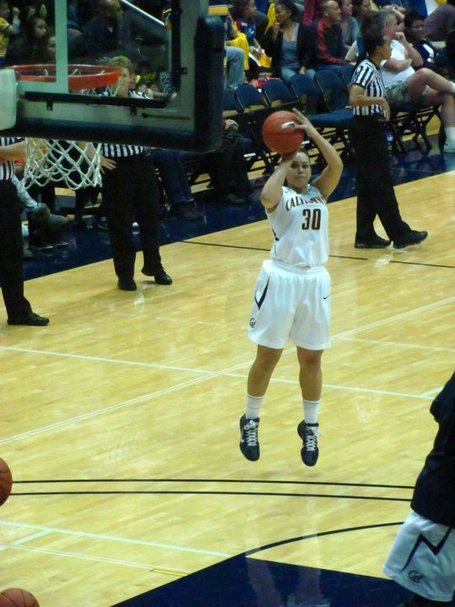 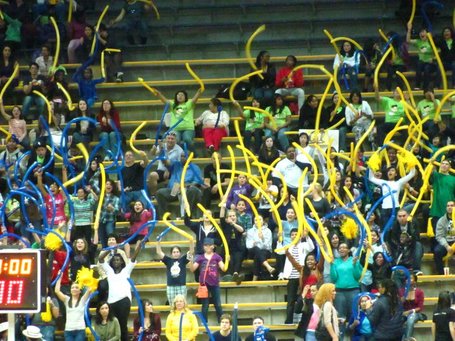 Soon, the game was starting back up and it was time to MAKE SOME NOISE: 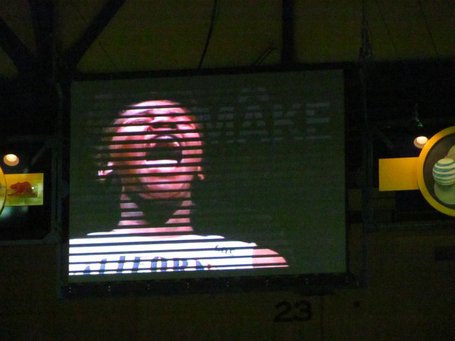 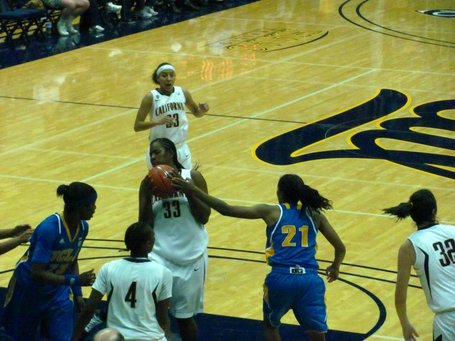 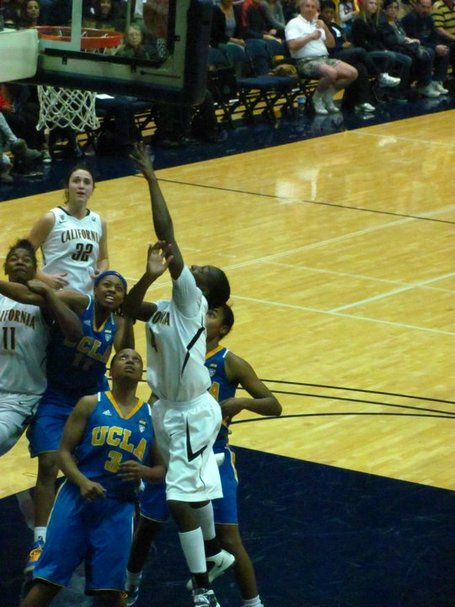 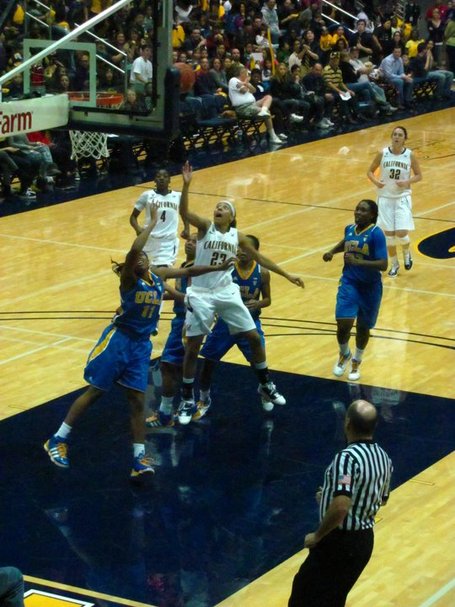 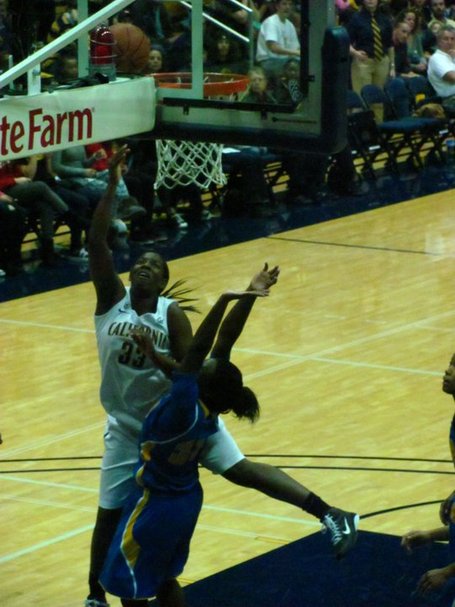 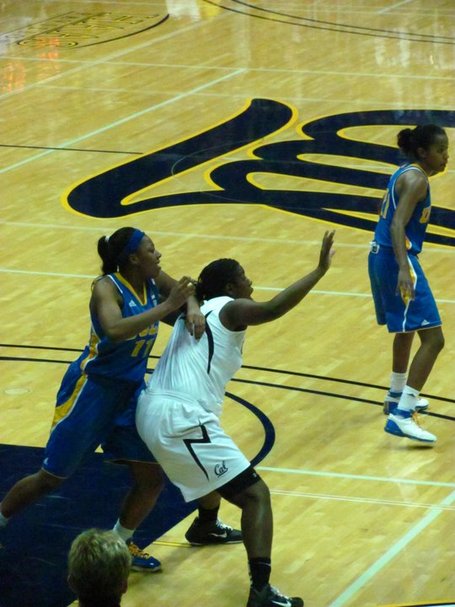 Lindsay Sherbert sat for most of the second half, IIRC.  Perhaps it was due to an injury or some other reason, it was unclear.  Rachelle Federico came in to spot her, but I wasn't certain she was able to play at Sherbert's level.  Not certain why Boyle played Sherbert so little. 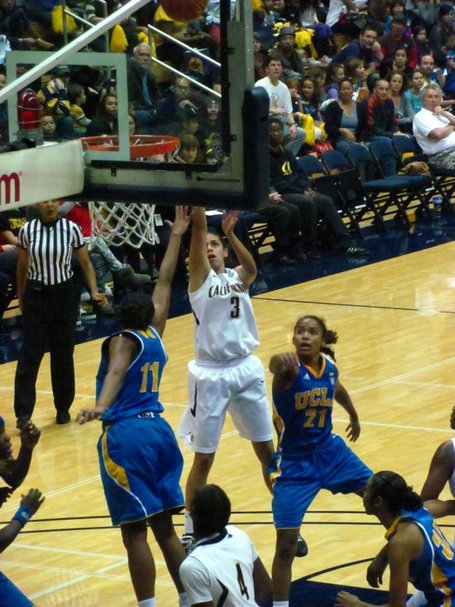 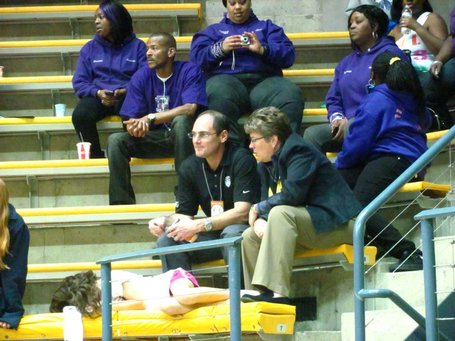 Larry Scott was there with Sandy Barbour.  Not certain what they were talking about.  Scott's offices are in Walnut Creek, so it is not so difficult for him to come over and converse with Sandy.  I did go over and take a photo with them.  I thanked Scott for the Pac12 and said we needed the money.  I didn't want to bother him too much, because he appeared to be with his children.  Or some other stunt children he had picked up to keep people like me at bay! 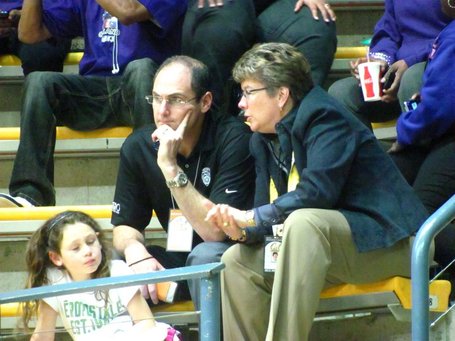 As I said last time, UCLA was playing pretty rough and the refs were letting them get away with it.  Cal was not getting a lot of FTs.  However, Cal was still staying in it.  They stayed about 6 points out for large chunks of the second half.  Once, they got within 4, but that was for a moment. 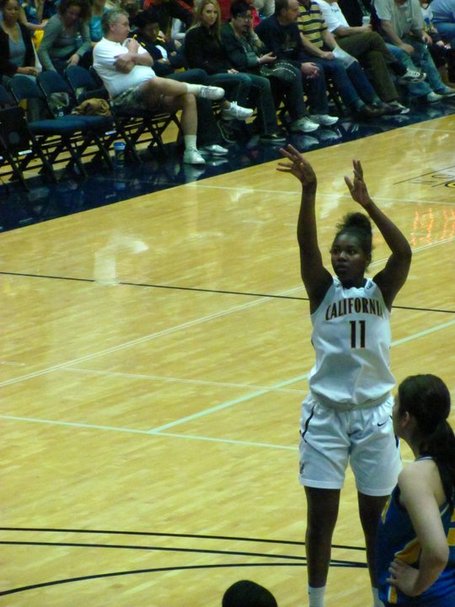 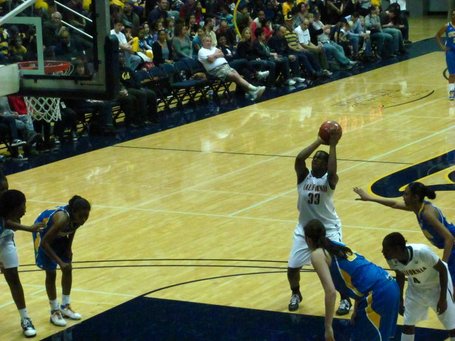 DeNesha Stallworth told us about her culinary habits. 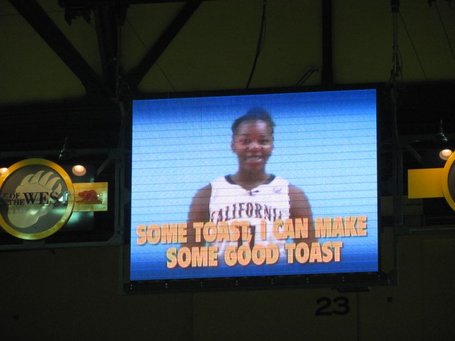 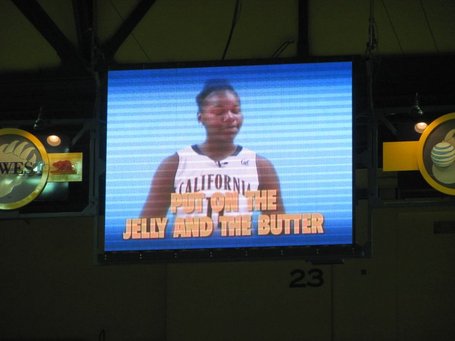 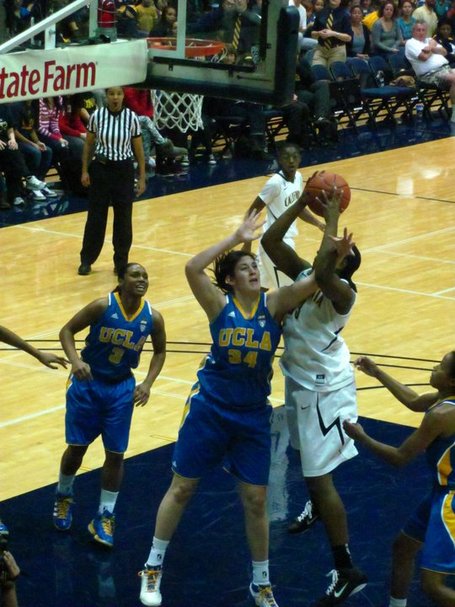 The real problem was boards.  Cal just couldn't get em.  On both sides of the ball.  They'd give UCLA multiple chances on the offensive side and then be one and done over on our side of the Court.  It was frustrating.  If Cal had been able to get more of the rebounds, they woulda been in a much better position.

What's that?  T-Shirts you say?  T-SHIIIIIIRTS!  NorCalNick actually caught this one!  I should say intercepted it....from a little girl!  He relented and gave the shirt to her.  Because he is a nice guy! 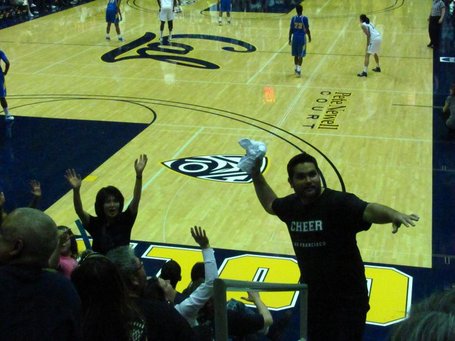 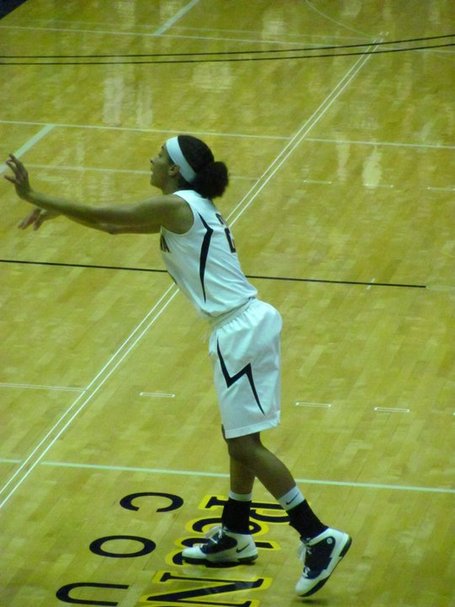 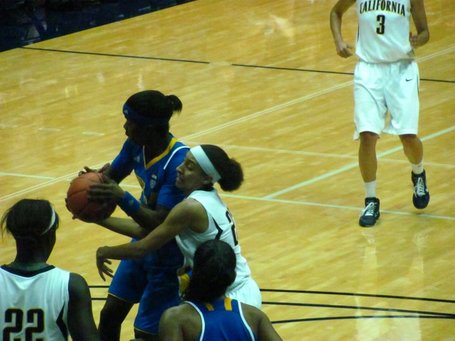 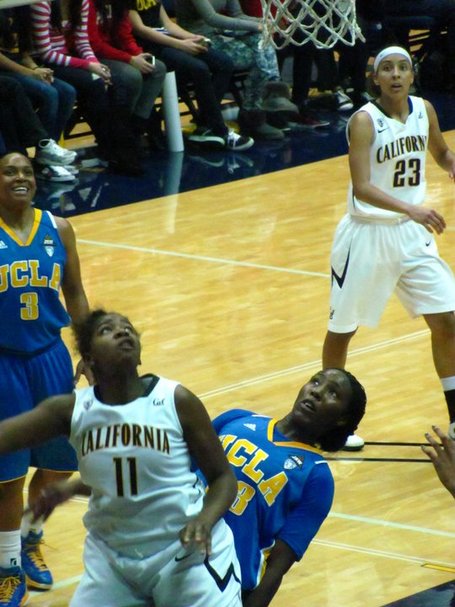 Love the UCLA players face on the photo above. 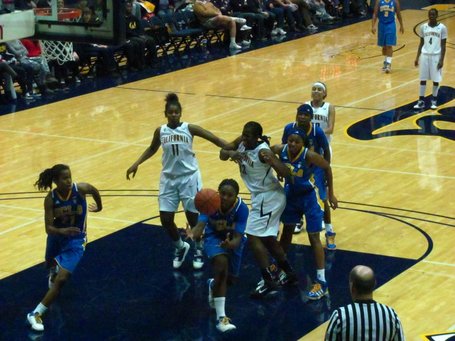 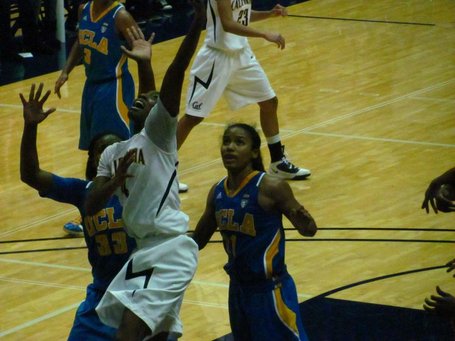 Cal did get within 4 like I said.  They had a chance to make it closer, but weren't able to hit key free throws when it mattered.  Then, Cal gets the ball off of the rebound, but immediately turns it over.  That was a key point of the game, really late in the game.  Had Cal retained control and got within 2 it is anybody's ballgame.  But they couldn't and UCLA went down to make it 6 to go on to win.

Everytime Cal made a big shot, UCLA responded.  :(!  Gotta give them credit. 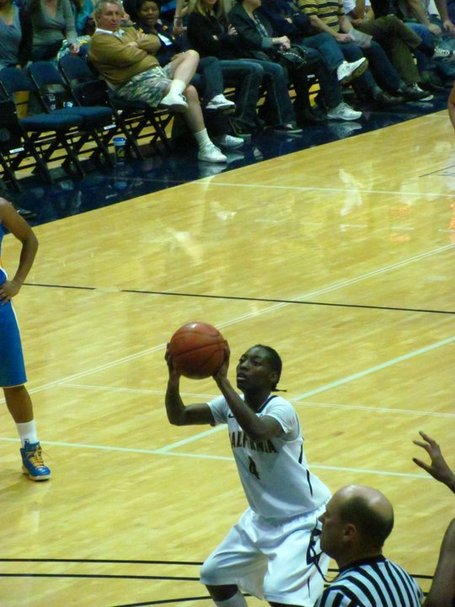 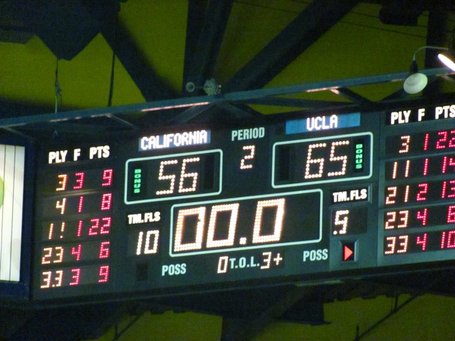 Thus, Cal loses by 9.  Fun afternoon.  I love women's basketball, because the atmosphere and fans are so much less neurotic than a football game.  If we just had the football version of that game with odd substitutions, limited execution, and plentiful missed opportunities, people would be flipping out "FIRE BOYLE!"  "BENCH (Insert Player Name)."  But people take it more in stride, enjoying the game for what it is and not making it more like professional sports.  Don't get me wrong, I love the football atmosphere, it is the aftermath in losses that can be frustrating.

Afterwards, we all decided to go for a walk around campus as it was so gorgeous.  Ran across this dilapidated shack by the Hearst/Euclid entrance.  What the heck?  Why is there a dilapidated shack here?  What is the story here?  It seemed like the place where ghosts of child molesters would go. 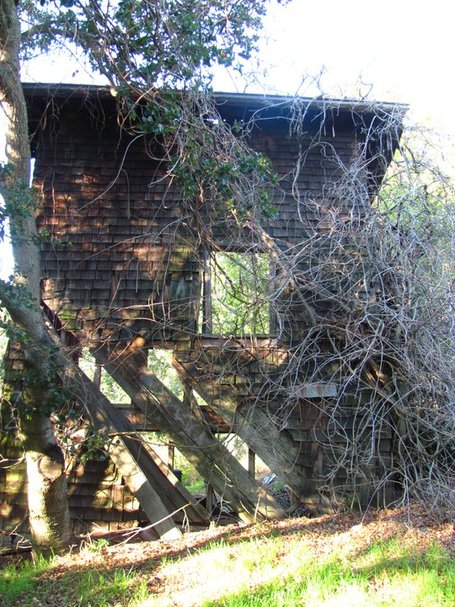 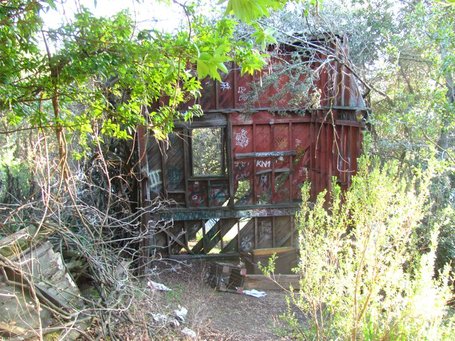 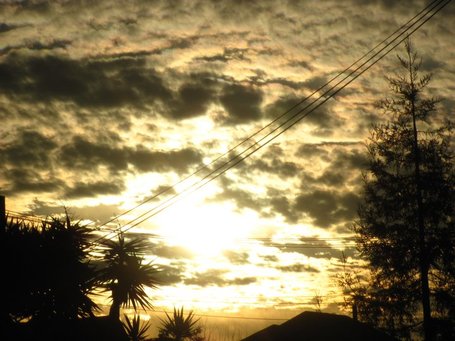