ALL HAIL GIANT OVERSIZED OSKI!  MAY HIS PLASTIC CLAWS BLESS OUR SPORTS TEAMS WITH BOUNTIFUL WINS AND HEALTH! 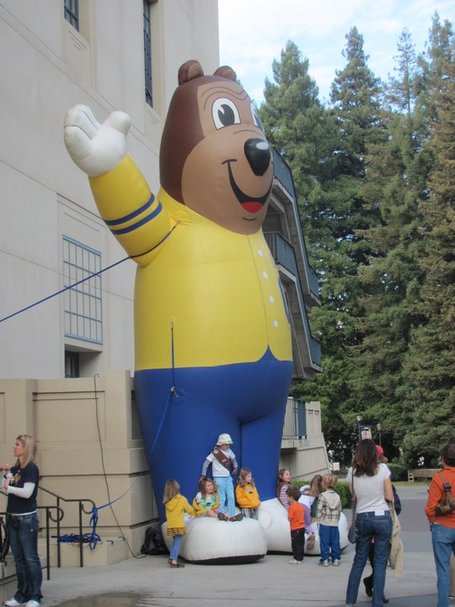 After the jump, more on the basketball game between Cal and UCLA on 1.22.11.  Unfortunately, comedically oversized plastic Oski did not bless us with a win.  GO BEARS!

When we got to Haas, the band was just finishing up its pre-game concert. 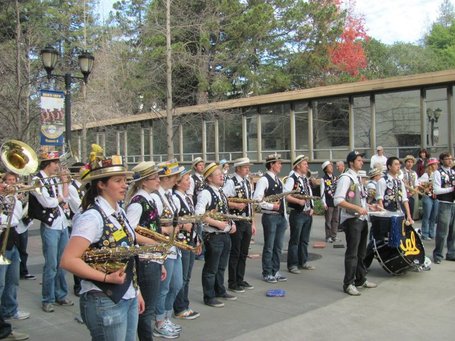 The dance team was finishing up its routine also.  There was a huge throng of fans standing watching the show.  When it ended, everybody tried to enter Haas all at once.  Out of nowhere, there were these massive lines to enter the stadium.  Very odd. 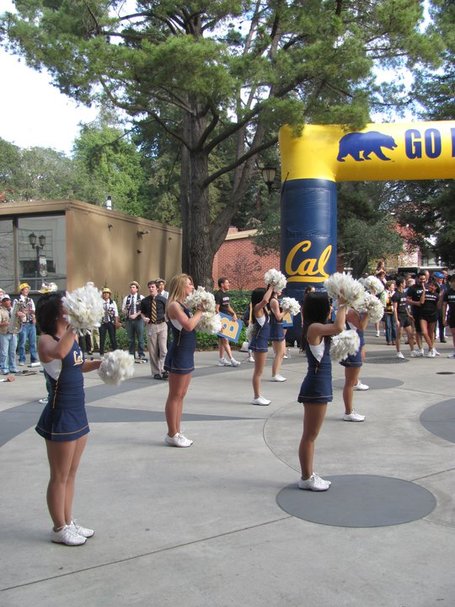 But we got in, just in time for the Star Spangled Banner. 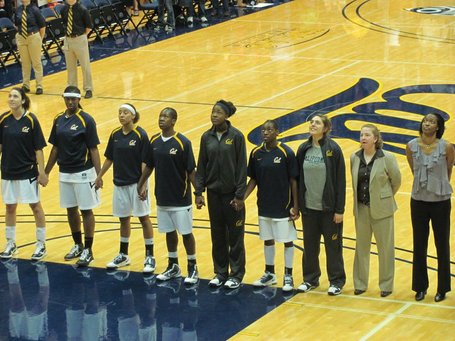 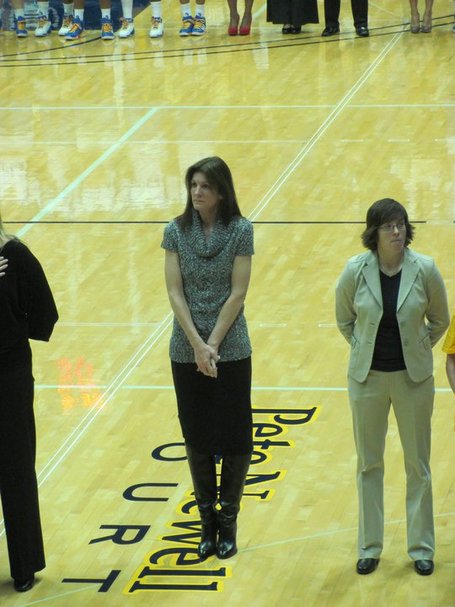 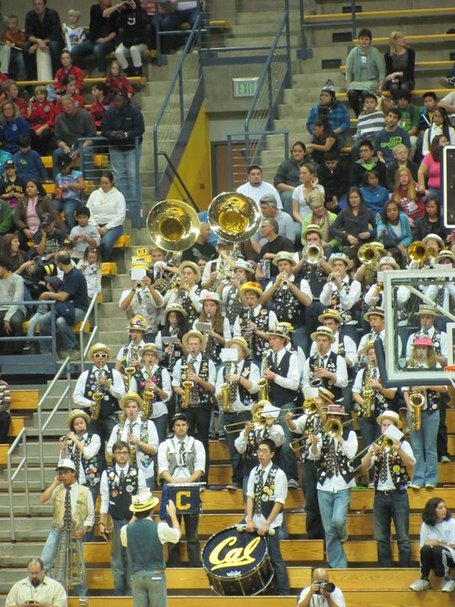 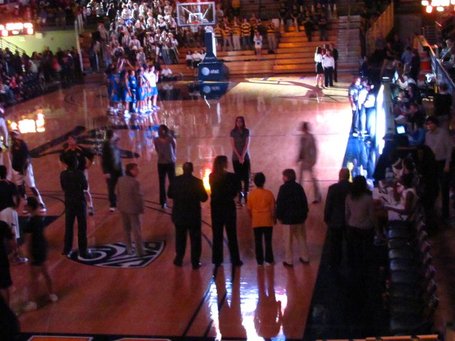 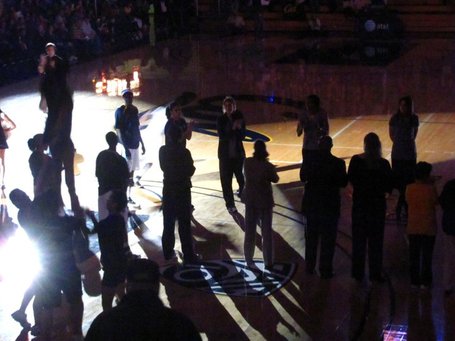 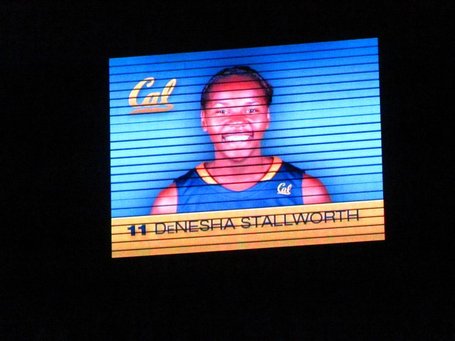 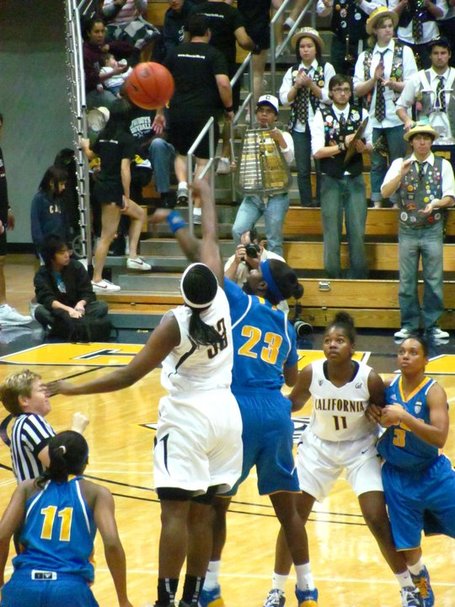 CheerSF was there.  Of course, CheerSF was there.  CheerSF is at all the WBB games.  For a cynical and jaded 20something such as myself, their positivity is always so grating.  In a world filled with pain and suffering, why must they always hit their cheerleading spots so perfectly?  Why must always be so non-ironically happy?  Oh, the things I have to deal with. 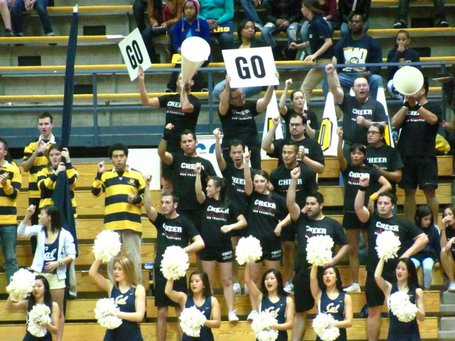 Cal got off to a rough start.  They had a lot of turnovers.  In specific, unforced turnovers.  It was frustrating to watch.  UCLA is a great team, it is not helpful to just give them advantages.  UCLA was up 7-0 pretty quick.

Losing Lexi has clearly hurt this team on offense.  Last year, we had Lexi and a lot of freshman.  Now, we have a lot of sophmores.  The sophmores are talented, but we still have some problems with consistent offense.  This is especially true since Eliza Pierre doesn't seem all that offensively focused.  UCLA would barely even bother to defend her.  Playing 4.5 on 5 on offense isn't great.  Cal ended up breaking 50, which was like 30x better than last year against UCLA.  Nonetheless, to start the game, it was rough going. 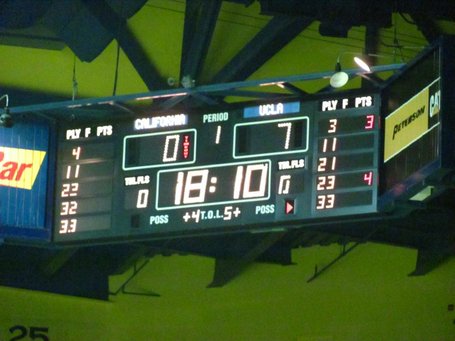 Here, we see Coach Boyle in her natural habitat:  Crouching.  She seriously  must have quads of steel to spend 90% of the game crouched like that.  And in those big heeled shoes.  My legs are cramping up just thinking about it. 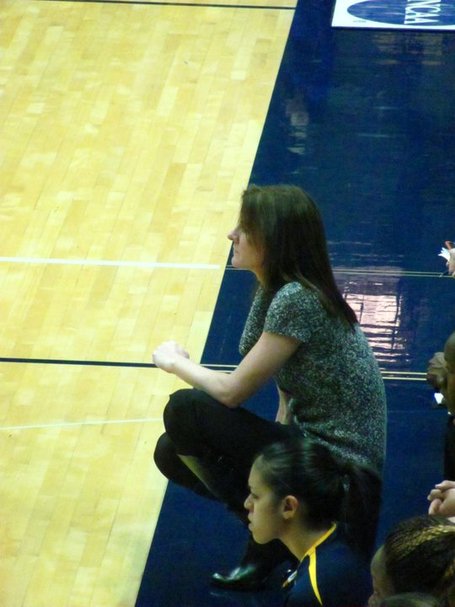 In contract, the UCLA coach attempted to be as ramrod straight as possible.  I'm not sure who lent her half of their stilts to wear, but it seemed to work. GO GO GADGET LEGS! 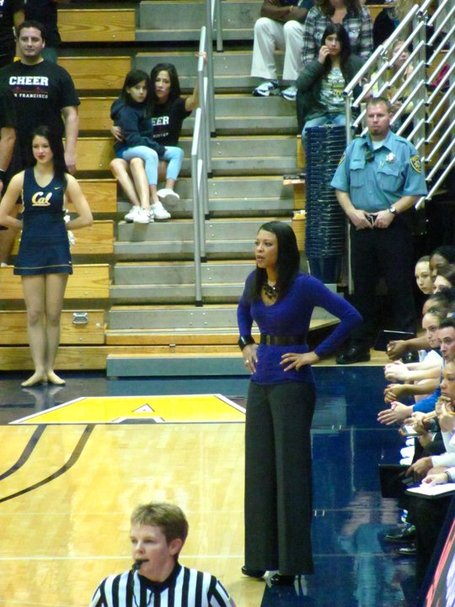 UCLA actually had some problems with ball-handling, too.  At one point, they did tip a ball out of bounds.....and right into a little girl's face.  OUCH!  Here, her dad tries to calm her down.  She seemed to recover and be OK, but ouch!  Goddamn UCLA, why they gotta assault all of our fans??????  You don't see me punching kids in UCLA gear, do you?  Mostly because I destroyed all those videos, but let's not talk about that! 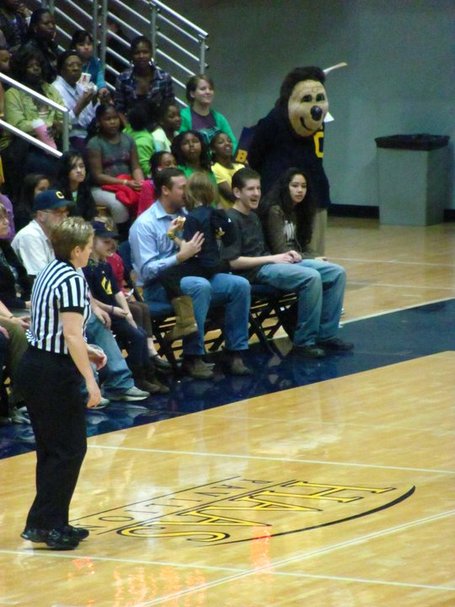 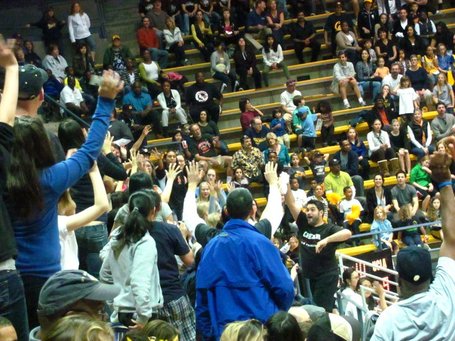 UCLA was going our way in the first half, so I didn't get a lot of close action shots, because honestly, who wants to see UCLA on O?  Did get some shots of Cal on D, though.  Cal was playing pretty good D and kept UCLA stalled for large chunks of the first half.  Too bad our O couldn't keep up. 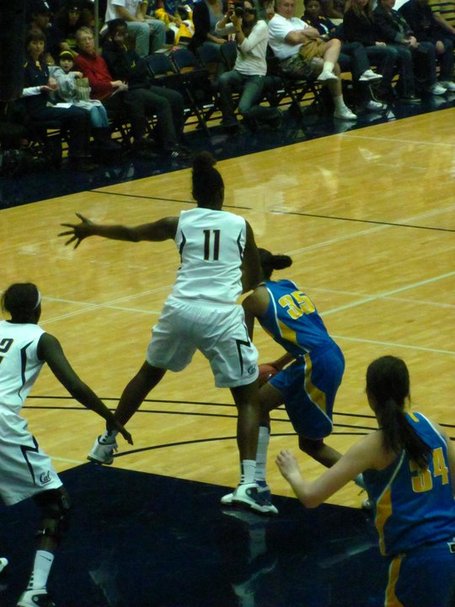 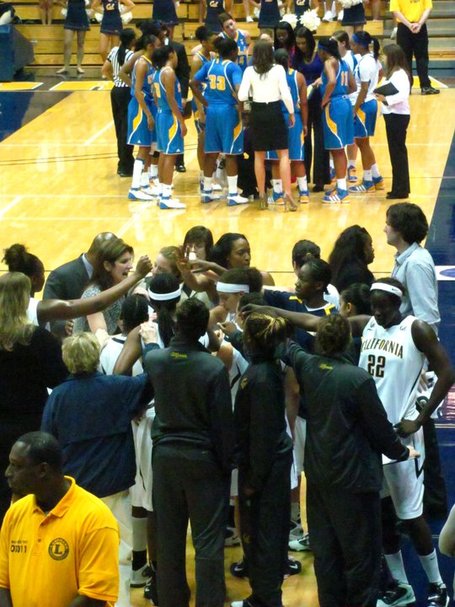 The refs barely called anything against UCLA.  They let them get away with murder!  Here are the first free throws of the game, well into the first half. 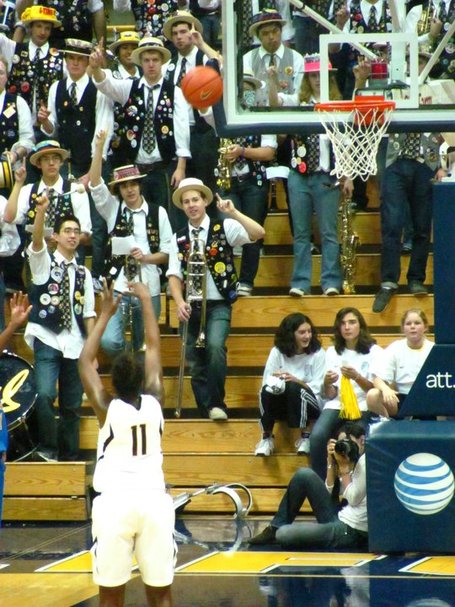 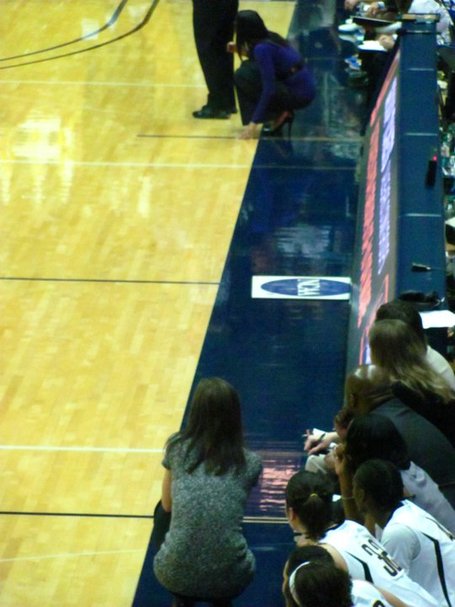 At half, UCLA was up by 9.  Considering that Cal was at 5 points or some such thing at half against UCLA last year, this seemed much improved.  That said, down 9 is still down 9.  Cal needed to improve its ball handling in the second half and be more consistent on offense. 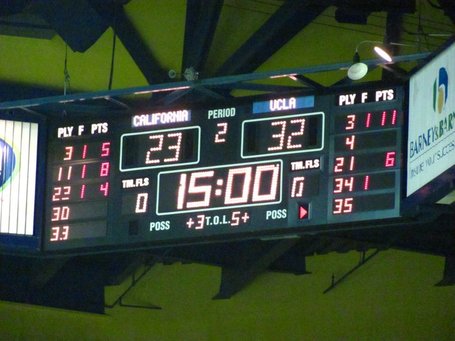 At halftime, we had a dance team performance. 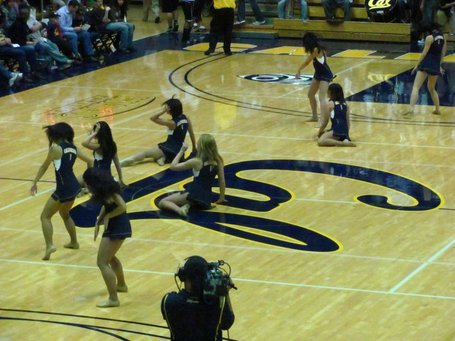 Then, they brought out former members of the basketball team. 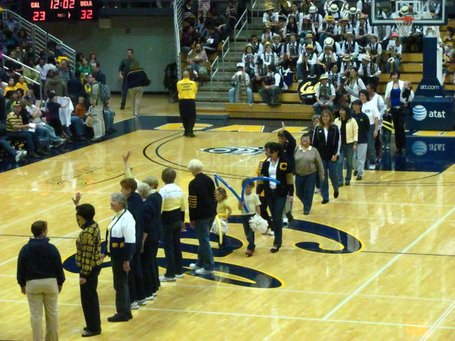 Then, there was the standard kids doing martial arts. 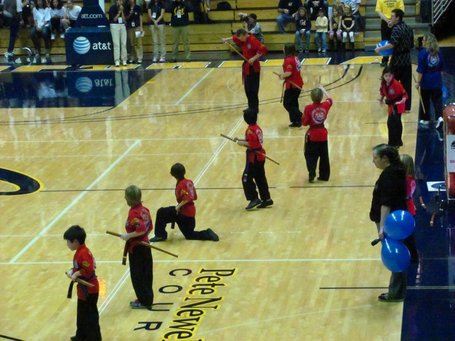 Now, I'm not a big fan of kids taking their clothes off in front of thousands of by-standers (or am I?....), but seriously, what's up with the all red kimono looking things?  I did try to start a "TAKE OFF THAT RED KIMONO LOOKING THING" but it failed to catch on.  Don't know why. 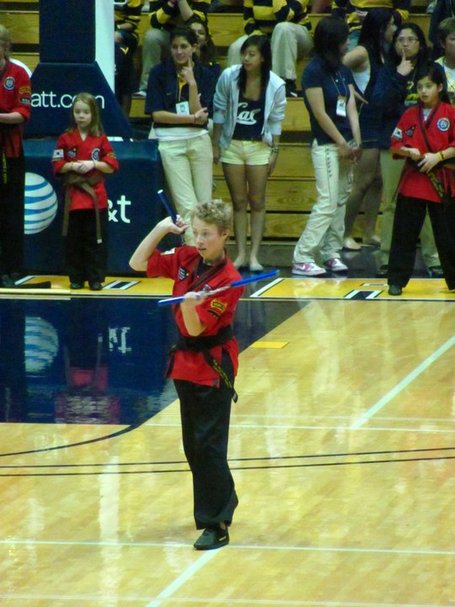 Clearly, I was just ahead of my time.  TwistNHook:  Always A Trend-Setter. 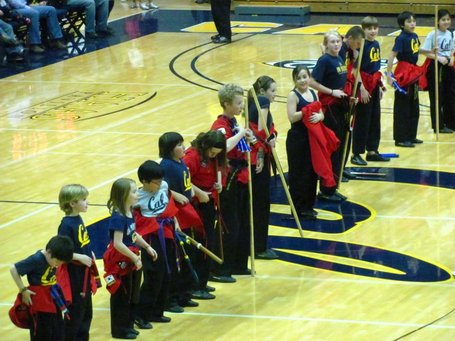 OK, that's good on the first half action.  Didn't get as much game action as I would have liked, because, well, who wants to see UCLA succeeding?  I know I don't!  But we'll have the second half stuff soon and there's more going on there.  Cal actually got back into the game, making it 4 at one point.  However, they weren't able to pull off the upset.  GO BEARS!