Shane Vereen Does It All In Nevada

Share All sharing options for: Shane Vereen Does It All In Nevada

After the first drive where Nevada marches down the field to make it 7-0, the Bears need to respond. However, California's first offensive drive in Reno is fraught with mishaps by the offensive line, quarterback, and receivers. Yet there's one constant chugging his way through each play, and that's number 34 doing his business. Once all the Golden Bears in front of him execute their assignments, Shane Vereen makes the Wolf Pack pay.

Michael Calvin is starting ahead of both Keenan Allen (probably the first sign we should've thought there was something wrong with Allen). Eric Stevens is a flanker and Anthony Miller is lined up right. Nevada puts seven in the box. That's all they really need. Calvin comes in motion to the left side, which almost always indicates run.

The outside zone run almost immediately goes wrong. Anthony Miller is supposed to seal linebacker Brandon Marshall off, but he pushes inside and gets into the backfield, forcing Shane Vereen to cut horizontally and minimizing his gain from the outset. It's unclear whether Nevada's James-Michael Johnson was supposed to be blocked and he just made a good read based on the blocking scheme, or if he was supposed to be unblocked, Vereen would access the cutback hole and burst past him. In any case, Johnson and Marshall both pursue Vereen and minimize his pickup.

Vereen also gets the ball knocked loose but gets it back.

Kevin Riley in shotgun. Bears line out 5 wide before Vereen motions into the backfield a little behind Riley. Nevada with three down linemen and a blitzing linebacker. Riley runs the zone read to see if #55 crashes toward him. He does, and Vereen hands it off. Inside zone blocking by the O-line is great (Edwards struggles a bit, but the play is run away from him, so it's not a huge deal).

This is a huge gain if Michael Calvin's man (again linebacker Brandon Marshall) doesn't recognize the read and crash inside to contain Vereen. This closes both holes (safety Marlon Johnson occupies the other) and Vereen is stopped short of the first down (Calvin falling in front of him also slows him down and might have caused him to trip up a bit going diagonally).

Cal has eight blockers (fullback, two tight ends)  up front. Worrying sign: Nevada doesn't even stack the box (only seven, five at the line of scrimmage), but they manage to trip Vereen up. How?

This is man blocking, power run game. Spencer Lander goes down to block the cornerback, Justin Cheadle pulls to block the outside linebacker. Throwback to our classic play, with a few adjustments. But someone doesn't block Brandon Marshall at the line of scrimmage. Either Ladner didn't get the initial push or Stevens completely missed on his block, or both.  It's the third play in a row Marshall has disrupted.

Shane is Shane though. He keeps the feet chugging after initial contact and picks up the first down.

Standard I-formation pre-rotates into shotgun. Cal lines up Isi Sofele at H-back and Shane Vereen at tailback before moving into shotgun formation with Vereen splitting out wide to the left and Sofele staying in the backfield with Riley.  Miller, Calvin and Jones are lined up wide.

The Bears leave the outside pass rusher unblocked for Sofele to block. I'm not quite sure WHY we do that, since that puts four offensive linemen on two unimposing defensive tackles and leaves Sofele and Edwards with one-on-one on Nevada's speedy defensive ends, and it doesn't look like we're going to run a screen pass unless Sofele wasn't planning to cutblock. but he jumps over him and still manages to put heat on Riley.

Riley does a good job though. He goes through his reads on the right side before coming back and throwing a good ball to Vereen under pressure and just before he gets hit. Donovan Edwards deserves some credit too for a good cut block on Ryan Coulson to make sure pressure doesn't come from both sides.

Vereen gets tackled immediately, but stays upward long enough to turn back toward the marker and lean forward for an extra yard.

Cheadle and Brian Schwenke lock up their men. Anthony Miller bulldozes Brandon Marshall into the ground. Mitchell Schwartz ultimately falls for an old defensive end trick, as Ryan Coulson goes a little low on Schwartz (hard to tell but it looks like a bull rush), dipping underneath his outreached hands, rushing past Schwartz to lock up Sofele behind the line of scrimmage. Sofele does manage to get back to the initial line of scrimmage.

I-formation set. Nevada has only four down linemen and they break through the offensive line with those underwhelming defensive linemen. Justin Cheadle doesn't hold his block with Zack Madonick, and Chris Tompek-Guarnero gets dragged along with Brett Roy and lets him come inside to hit Vereen in the backfield.

This first down is all Shane. Vereen gets hit twice behind the line of scrimmage but continues to stumble forward using his hand and barrels his way to the first down marker. Good blocking by Mitchell Schwartz and Eric Stevens on the edge gets Vereen that first down.

Not much to say that hasn't been said. Good pass protection, pretty good routes. Riley overthrew it a little and it sailed through Keenan Allen's hands.

To my dumb eyes, it looked like Riley shifted his left shoulder downward a little (so his body wasn't upright while throwing, but titled like the Leaning Tower of Pisa). The end result was the ball sailing a little on him. This is a pass Keenan Allen still probably catches if he's healthy, but sadly he wasn't. Good tackle after the pick by Allen, showing off his safety skills.

I don't like to end it there. Let's add a touchdown, shall we?

Cal is in I formation strong (fullback lined up on the side of the tight end). Two wide receiver set. Standard I formation. Nevada has  a very close 4-3 alignment, with one linebacker in two point stance at the line of scrimmage.

Riley motions to Michael Calvin, who moves up toward the line of scrimmage. This is probably to provide closer support for the running play to come. 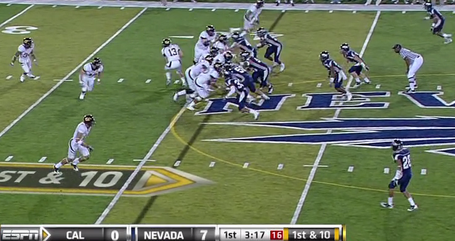 The linemen move to seal off, and this time they seem to be working well together. 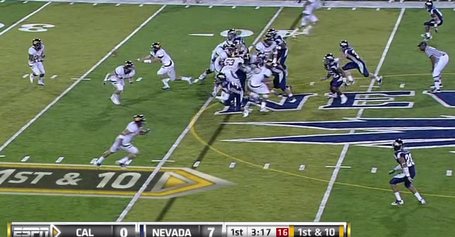 Donovan Edwards and Anthony Miller seal off the edge, and Eric Stevens is coming into the play to block out the linebacker Brandon Marshall. 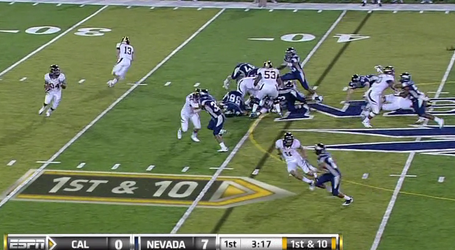 Anthony Miller moves to the second level and hits up the middle linebacker. Michael Calvin is positioned perfectly in front of the cornerback. The rest of the defensive line seems to be out of the play.

What do you know, perfect blocking! I haven't seen this in awhile. 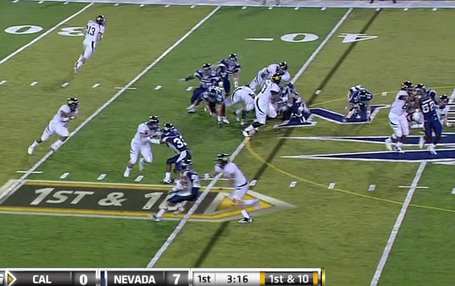 Excuse me while I enter the thought process of Shane Vereen at the very moment of that photo above.

HOLY CRAP LOOK AT HOW BIG THAT HOLE IS I NEVER SEE HOLES LIKE THIS I'M GOING TO RUN THROUGH IT AND NO ONE'S GOING TO STOP ME FROM SCORING SIX POINTS IF THE STADIUM COLLAPSES I'M GOING TO FLY TO THE END ZONE.

Here's a better view of the offensive line blocking.

Watch out for the great cut blocks by Brian Schwenke and Mitchell Schwartz as they take out linebacker Kevin Grimes and defensive lineman Brett Roy respectively.

See how Donovan Edwards, Justin Cheadle, and Chris Tompek-Guarnero converge on the two remaining  defensive linemen and take them out of the play.

On the left side, Eric Stevens does a good job putting his body between Marshall and his defender. Anthony Miller moving to the second level to take out James-Michael Johnson is big-time too.

There's that big hole again. It's sooooo big. We never see holes like that on the field anymore, so be grateful for this anomaly.

These last three photos are just for my gratification. Not much film analysis here except Shane doing his thing.

When Doyle Miller overruns the play, Vereen does a second hop and now has complete daylight to the end zone. Marvin Jones also simply follows along and doesn't really block out Miller. He lets Miller do all the damage on his own.

If you're counting, Vereen picked up Cal's first 80 yards on the game. Rolling thunder.