Share All sharing options for: Be Aggressive! (But Don't Be Too Aggressive!)

Here's the remainder of Nevada's first drive. See the first seven plays and how being aggressive led to Kaepernick gashing us on those first two runs. Donations welcome (these articles take a LOT of research)--for more info, click on the box at the end of this article.

Designed handoff to Vai Taua. This play is probably meant to pick up a chunk of yardage and to minimize the effect  Cal's disruptive defensive line can have on this play.

Nevada pulls the receiver Brandon Wimberly from the right side to lead for Taua--the offensive line is zone blocking. They're not really succeeding in sealing off the edge. What's worrying is how close all the Golden Bear defenders are in the box. Keith Browner gets pushed inside by left tackle Jose Acuna and both Robert Mullins and D.J. Holt engage well inside.

Mullins does make an impressive tackle on Taua despite being engaged by the center, although he has to drag him forward rather than pushing him backwards, allowing Taua to pick up another couple of yards.

After the jump, more gamefilm!

First variant of the veer. Browner is blocked by Acuna on the play, so the Wolfpack aren't reading the outside linebacker here.  Nevada is still using the zone read though; this time, it's Colin Kapernick reading the inside linebacker Mullins. Kaepernick is now testing how well Mohamed's replacement will handle this. Mullins takes the inside angle to take down Taua. Kaepernick sees this pursuit angle, withdraws the ball and takes off on a diagonal lane toward the sideline and the first down marker. But Darian Hagan sniffs it out, gets past his wide receiver blocker, and closes to Kaepernick, making a great open field tackle and forces 3rd down.

Cameron Jordan got held by the jersey. Just want to point out this seems to be a recurring theme. 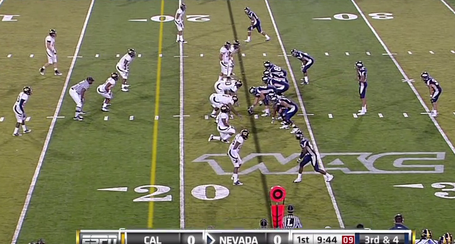 Cal is in that curious 4-2-5 nickel formation; 2 outside linebackers (Mychal Kendricks and Jarred Price), 2 defensive ends lined as defensive tackles (Aaron Tipoti and Cameron Jordan), and Bryant Nnabuife in as the nickelback.

However, it's what Nevada does on this play that interests me more than Cal. This is a VERY interesting wrinkle of the zone read that I want to explain in greater detail. 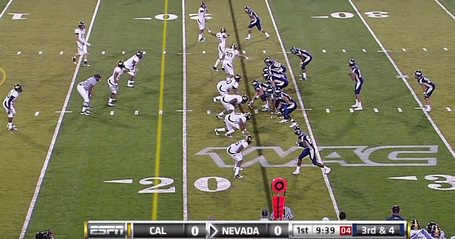 Both Nnabuife and Kendricks indicate to Marc Anthony to watch out for something. Kaepernick is watching this and takes notice. It doesn't seem to have any visible impact on the play, but perhaps someone will figure out what those two are doing. 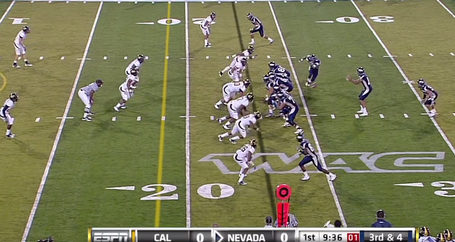 Again the wide receiver Brandon Wimberly pulls. If you remember the first down play of this drive, it's almost the exact same look, so the Cal defense should expect run, right? 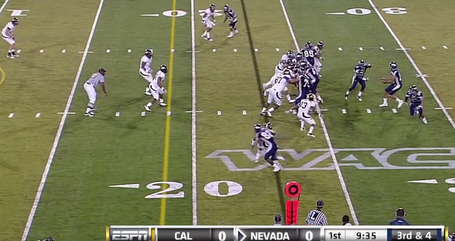 Oh, but what is this? Fake jet sweep!

Instead of turning back to Taua, Kaepernick keeps the ball in front and tries to draw weakside defenders toward Wimberly getting the handoff--since the receiver is turned away from the top cornerback. But Marc Anthony keeps on his man at the top of the screen and the linebackers don't hedge toward him. Perhaps this is what Kendricks and Nnabuife were indicating to Anthony (stay at home with your man)? Hard to tell. 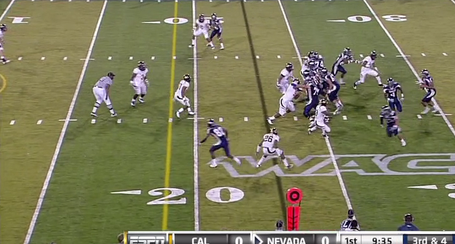 Nnabuife comes well off the edge and seems to have Kaepernick in a good chase-down position, but Kaepernick has been eyeing Nnabuife since he came up to the line of scrimmage. Although tight end Virgil Green probably should have blocked him better, Kaepernick is instinctive of the danger and rolls out to the left. 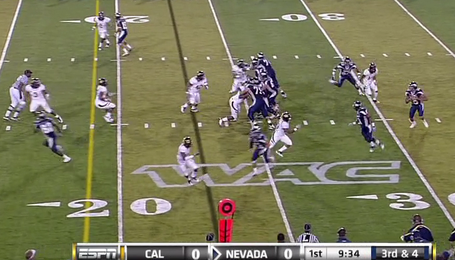 However, Cal seems to diagnose this play well and looks like they're about to get their third down stop. D.J. Holt comes over to get on the streaking Tray Session while Darian Hagan comes up to guard Vai Taua. Price comes up to get onto Wimberly, and that'll leave everyone covered on the play. Very good pass defense rotation, something we didn't see much of last season. 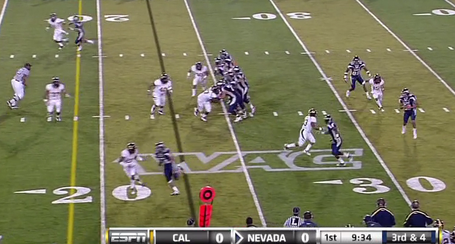 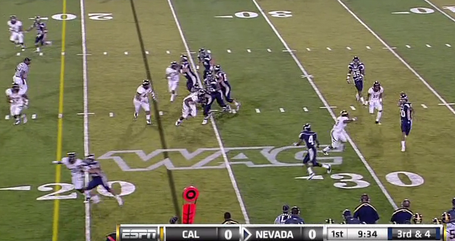 Price goes for the quarterback and leaves Wimberly open. Again, the aggressive mentality of Pendergast's schemes comes back to bite us here. If he'd just stayed with Wimberly this is probably a throw-away and a field goal. But Price decides to gamble and chase down Kaepernick when staying at home with number 4 might have forced an incompletion, a very tough throw downfield, even an interception.

Instead, first down. Avoidable, if our defense had stayed disciplined. It again shows the versatility of looks Nevada's offense threw at Cal's defense and how important it is for our defenders to stay in front of their men.

Back to five down linemen and a base 3-4 with the safeties hedging close in. Nevada has the flanker receiver move forward this time instead of pulling and the Wolf Pack linemen seem to block outside zone and give the runner a lane to cut right and toward open space. It looks like Kaepernick is reading someone, but every defender is being blocked for the most part so it's hard to tell. In any case, he gives it to Vai Taua.

Cameron Jordan won't have any of it though. After an initial tug attempt by Steve Haley to turn Jordan outside and give Taua a hole to gash through, Jordan brushes him aside and buries Taua at the line of scrimmage.  Some credit should go to Taua--he manages to spin a little from Jordan's initial tackle, falls forward and picks up a few yards rather than none.

The touchdown part of this drive is Nevada's version of play-action--a fake designed handoff to the tailback. In fact this whole play is a more evolved version of what USC has been killing opposing defenses for years with--the bootleg rollout. The tight end takes a step forward and drags left, the wide receiver Malcolm Sheperd pulls left as the safety valve for Kaepernick, and Kaepernick takes a mini cut left in a three step drop. He fires to the sideline split end Tray Session, who has managed to elude Darian Hagan in one-on-one coverage. Hagan seemed to be playing press coverage on this one; if I had to guess how Session eluded Hagan, I'd suspect Session bit hard on one step and then cut back to the sideline corner. Hagan must've kept on running and didn't stop in time to get back. Perfect execution by Nevada results in a 7-0 lead.