Kaepernick Races Past Aggressive Cal Defenders, The Sequel (Plus An Illegal Block!)

Share All sharing options for: Kaepernick Races Past Aggressive Cal Defenders, The Sequel (Plus An Illegal Block!)

Kaepernick had two big scampers on the opening drive (here is the first). This is the second, and far more egregious breakdown. 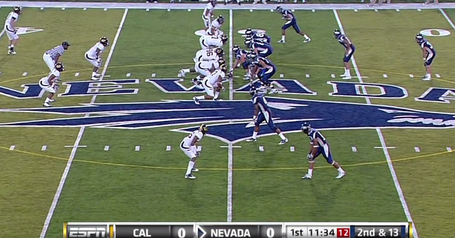 Cal again lines five defenders at the line of scrimmage (three down linemen, the outside linebackers in two point stance). Kendrick Payne is now at nose tackle. 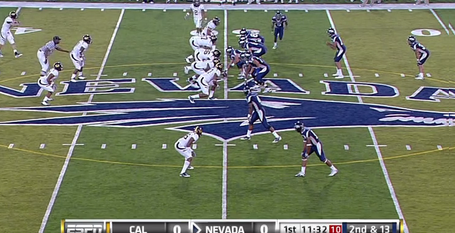 The right flanker comes in motion. If any of the last couple of plays are an indication, that means Nevada is probably running to the left. The veer play is coming again. 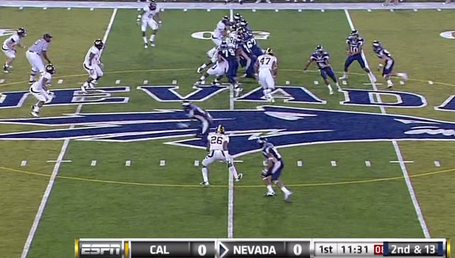 Browner again is left unblocked. The wide receiver does not come into block and seems to get ready to turn upfield.  You can tell by the way the offensive line is blocking and the way Kaepernick is looking that this is the veer play again. 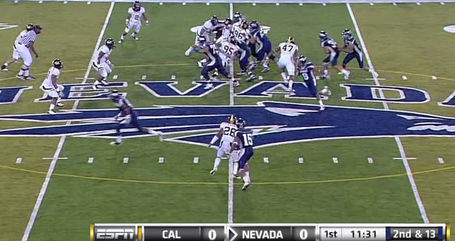 Browner crashes toward the tailback Taua on the simulated handoff, but Kaepernick has kept the ball. Browner is just doing what he's supposed to do (at least that's what I suspect, since I can't understand why he'd be hitting the tailback without even looking at the play ahead of him). 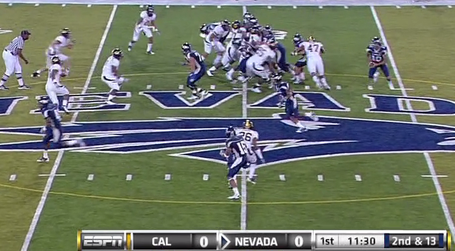 It's what's happening behind him that makes very little sense to my knowledge-less eyes. Again, with the outside linebackers crashing to stuff the run from the edges, the inside linebackers or safeties should be pulling outside to handle the outside running lanes, especially for a play as dangerous as the veer.

I'm not sure where Chris Conte is going on this play. There's no reason he should be racing ahead of the linebackers, especially when there are already four people racing to contain inside.

Robert Mullins again leaves his responsibility (the outside lane is left way open) to crash the interior. This I can only chalk up to inexperience. I wouldn't be surprised if Clancy Pendergast told his players to be proactive and find the proper lanes to attack, because that's the only reason I can think of why Conte, Mullins and Holt all converge inside and leave a WIDE gaping hole down the left hashmark. 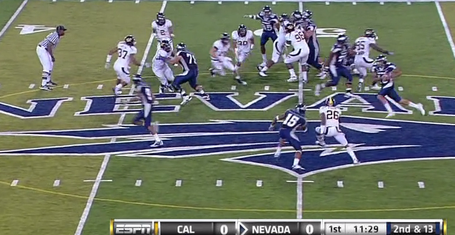 However, despite ALL of these setbacks, there's still reason for hope, Darian Hagan (#26) diagnosed it right. He immediately recognized the scrape-exchange and hedged in on Kaepernick. He races toward the quarterback, evading the wide receiver block by Rishard Matthews. Thankfully, it looks like he'll get to him on a stutter step and minimize the damage... 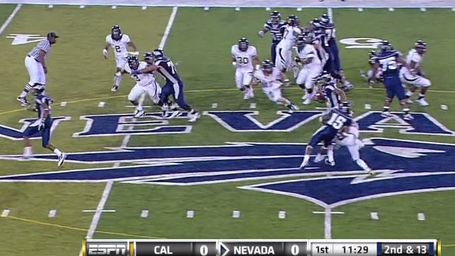 HEY! ILLEGAL BLOCK IN THE BACK BY MATTHEWS!

THROW OUT THE YELLOW FLAGS REFS! Hagan could've made that tackle if he didn't get hit from behind!

And that's why you play disciplined football on the road. You can never count on the officials to do the right thing by you.