Roll On: How The Golden Bears Probably Attack The Wolf Pack

Share All sharing options for: Roll On: How The Golden Bears Probably Attack The Wolf Pack

(For some additional Cal-Nevada preview material, I examine some key head-to-head matchups between the Golden Bears and the Wolf Pack on SB Nation Bay Area.)

Yesterday I talked about the basic elements of the Pistol offense. Today I focus on what Cal should do to stop the Pistol.

Bend but don't break. Hey, remember this phrase and how much you wanted to pour kerosene on it? Well it's probably coming back tonight!

Here are the two general options I see when determining on how Cal would stop Nevada tonight.

1) Give up tons of yardage with generally standard formations (3-4), but try to out-execute Nevada at the line of scrimmage and occupy the gaps.

2) Play all-out to stop the run (load the box), but risk getting burned on the pass. (I don't think Cal will sell out against the pass unless we really feel Nevada's bubble screen game is beyond parallel.)

The first would mean defensive coordinator Clancy Pendergast has enough faith that his front seven will be able to get penetration, hold their assignments and do damage. The second would mean he has more faith that his defensive backs can hold the fort and aren't vulnerable to quick hitting passes or deep vertical throws.

There are plenty of reasons why I'd like doing the first option.

The first real reason is Nevada will pick up its yards whether we like it or not--just like any triple option attack from Air Force or Navy, the yards will come because of the multitude of looks and options the offense can go with. Nevada gets its yards (nearly 600 on average in the first two games--last year they were never lower than 300, sometimes as high as 800), so you have to choose between risking a big play in order to get a big stuff. So we have to ask ourselves: Do we want them sipping from the water faucet, or let the stream run unabated and hope we can plug it up before they flood the sink?

With the focus being the run, Cal's coverage on the outside will almost certainly be zone--the Bears are not going to risk getting burned on one-on-one coverage and will do their best to keep wide receivers in play and in front and make their open field tackles. Contrary to popular opinion, Pendergast is quite happy to run primarily zone coverage, and in this game I'd say this would be the approach I'd take on the outside. Let Colin Kaepernick show he can attack the seams with the tight end and throw some wide receiver screens and outs, but don't let him go vertical and pick up big gains downfield. The running attack is already dangerous enough--getting the passing game going is just asking for trouble.

The Bear Will Not Quit argues that we should disrupt the Wolf Pack offense. I don't disagree that some disruption would be useful--you want to get Nevada in 2nd and long, 3rd and long situations. Kaepernick is pretty good given short situations; the offense has so many options and can go run and pass with three or four yards to pick up rather than eight or nine, when a pass seems obvious.

However, unless we get torched for a few touchdowns, I'd rather we stick to more basic principles. Use the 3-4, let the defensive line try to win the battle at the line of scrimmage. If they hold open gaps, let the linebackers fill in to ge to Kaepernick. A team that's too aggressive could run themselves out of the play and cede the advantage to the offense. Especially with an athletic, intelligent quarterback like Kaepernick.

Discipline people. Discipline. That's what I want to see.

I want to see the defensive lines shed double teams. While I'm not expecting Cal's line to come out and dominate, there should be a good deal of penetration or at least occupying two linemen so that the inside linebackers don't get blocked out of the play. Nevada's offensive line is solid, but they shouldn't be constantly winning the line of scrimmage play after play.

I want to see the outside linebacker, whether it be Mychal Kendricks, Jarred Price or Keith Browner hold his assignment and keep Kaepernick close to him. You'd think Price and Browner would be picked on a little bit, but since they'd probably easier to block than Kendricks I could see Kaepernick trying to read Kendricks a little. You don't want the offensive line to shade too much to reading only one guy because the support from behind (the inside linebacker, the safety) for the unblocked guy will also shade toward that side of the field.

So while Price and Browner could be the main focus of Kaepernick's eyes, I'd expect them to be more the targets of designed handoffs where they might overrun the play and get taken out of the game. Kendricks will be far easier for Kaepernick to read than the Nevada offensive line to block. 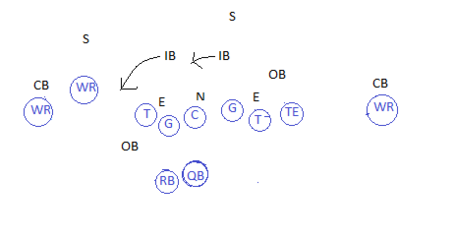 I want the inside linebacker to rotate right behind the outside linebacker to provide the second level of support, as well as evade the blocking linemen (most likely the tackle on that side of the field). Here's where Mike Mohamed's limited status comes into play. He might be at full strength, but without the practice reps in reading the pistol offense, he's not going to be as capable at spying Kaepernick. With Mohamed, Cal's defense could hold steady. Without him, it's anyone's guess.

It's one of the main reasons I don't like stacking the box or playing too aggressively--if the linebackers get blocked out or run themselves out of the play, there won't be much help behind. I like D.J. Holt a lot, but I'm not sure if he's ready to shadow the quarterback on every play and then let Robert Mullins, Nick Forbes, Steven Fanua, or whoever's left behind him to clean up the mess. It's why I feel Holt has the most important job in tonight's game. He has to be ready to be that second line of defense if the unblocked outside linebacker misreads or oversteps the zone-read play, or if Vai Taua is able to run effectively behind Nevada's zone blocking.

I'd like to see the cornerbacks show they're capable of doing more than just cover--there'll be a lot of run blocking and they'll need to shed the Nevada receivers early and often. Darian Hagan should be more than capable in shedding blocks, so they'll probably the receiver very wide and try to take him out of the play. Marc Anthony is big and physical, but his technique could still probably need some work. Bryant Nnabuife might be tested, because I'm not sure how good he is at getting off blocks (he definitely has the measurables, less certain about his decision-making. Attacking the slot with a jet sweep isn't something I wouldn't entirely count out.

Finally, the safeties. Josh Hill, Chris Conte and Sean Cattouse haven't been tested much, but this is the week they have to step up. They need to be ready to plug up the second level and make sure Kaepernick has to keep on cutting back across field rather than chugging straight up it. Let him tire out trying to run and find an open hole and this'll go a long way toward ensuring success downfield.

Remember, a terrible Notre Dame defense shut out the Nevada offense simply by being disciplined, staying at home on Kaepernick and forcing him to run east-west rather than north-south. There was occasional aggression, but the team simply played fundamental football and got their business done.

So stick with the base 3-4. Occupy Nevada's offensive line, avoid playing too passionately, and make them keep having to fight for 4 to 6 yard gains rather than giving up a huge 30 to 40 yard gain and inspiring the team to think they can beat up our unit.

Don't suck. This would be the best way to attack the Wolf Pack.

Yes, Nevada shut down Colorado State, but as I explained last week, an army of slugs could shut down a Steve Fairchild-run offense. So that means nothing. What's more telling is the numbers against Eastern Washington: 432 total yards, 24 points given up. It was 35-24 going into the 4th quarter, and the margin could have been cut even closer if Nevada hadn't forced a critical wide receiver fumble.

Nevada will probably take their chances with seven in the box and do their best to drape coverage on Marvin Jones and Keenan Allen--neither corner is strong enough to match up with the two feature Cal receivers one-on-one. Nevada's pass defense was the worst. Kevin Riley should have a field day against the worst passing defense he'll see all season--if he can show off his short passing game with slants, outs and screens, then that'll open up the running attack, and let Shane Vereen and Isi Sofele fly downfield.

So yeah. Don't suck. That's the strategy. Roll them up there, hope the defense rolls down the Pistol, and roll on to Tucson.