In case you missed the previous posts in this series, you may find them here: Part I: The DL Zone Read.  Part II: A Defensive Stop.  Part III: Baited & Busted.

In my last post, I gave a breakdown of what happened during Oregon tight end Dickson's first touchdown: a busted coverage.  Continuing my search for what went wrong during this game which allowed Dickson to have so many catches, I decided to look at every single catch by Dickson during this game.

What did I find? Let's take a look. 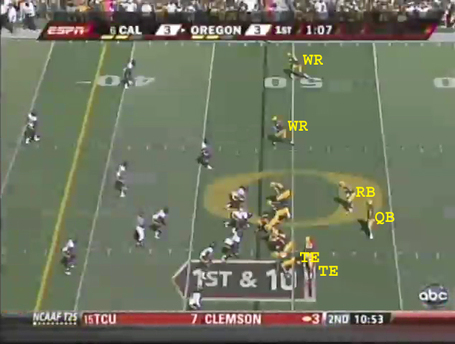 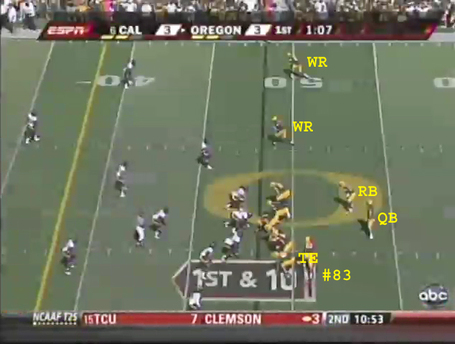 Where's Dickson on this play?  He's the TE off the line of scrimmage.  I've shown him in the picture above with his number, #83. 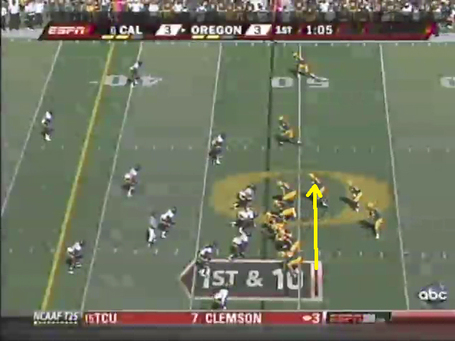 Oregon motions Dickson across the formation towards the twin WRs. 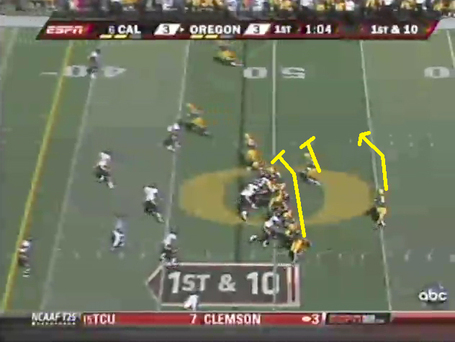 Here is a picture of the play just prior to the snap.  The first thing to notice is that the offensive line is sliding its protection to the right, towards the twin WRs, and the QB is rolling out to his right. 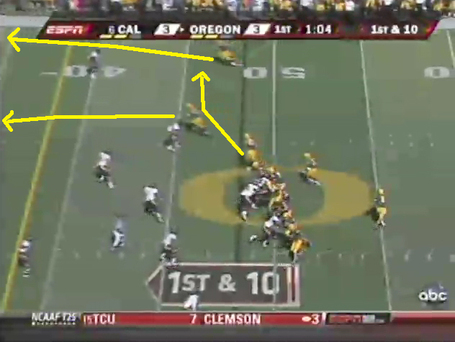 [footnote: Upon further review of more game film, it has come to my attention that the routes run by the outside and slot wide receivers are a "deep comeback" and a "deep out," respectively.  When I originally watched the film of these earlier plays, I could not see the WRs because they were off the screen, and made a guess as to their routes.  However, the offense ran the same play in the 3rd quarter and the ABC video feed offered a better view of the play where the receivers seemed to be running a deep comeback, and a deep out.  And actually, these routes make more sense as since they are in the direction of the QB's rollout and are more conducive to the offensive play than a "go"  or "post" route.] 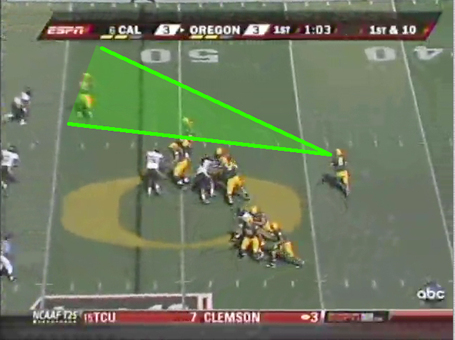 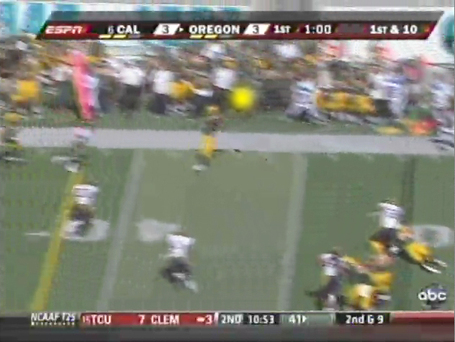 And passes him the ball (yellow dot) for an easy 7 yard gain or so. 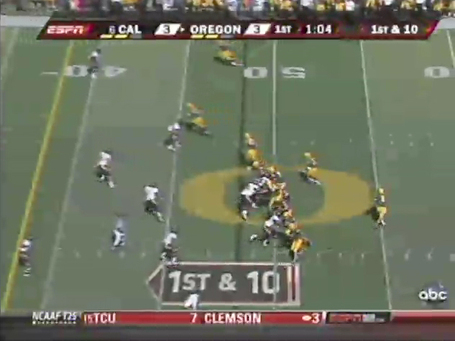 Before we can talk about why the Oregon play succeeded, we also need to view what the Cal defense was doing.  So above is the picture of the play just after the snap.  What's going on here? 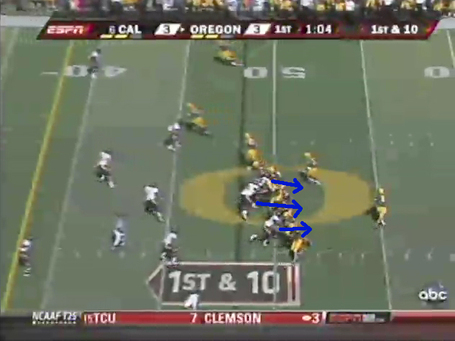 First off, you should note that Cal has sent three defenders towards the QB on pass rush. 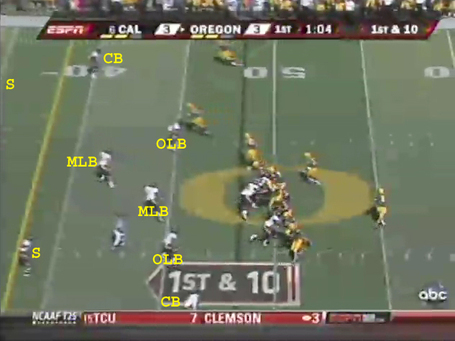 That leaves 8 defenders in pass coverage.  I've shown the defenders above with their respective abbreviations.  Note that one of the Cal safeties is off the screen to the far top left. 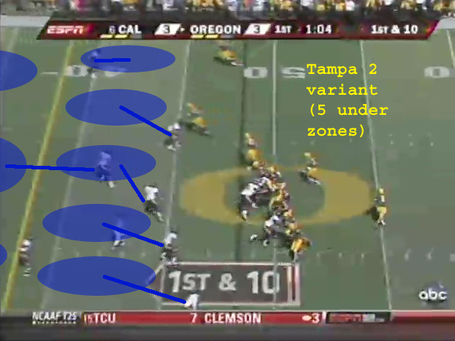 Cal has dropped three defenders into deep coverage, and has five defenders in underneath zones.  What do we have here?  We seem to have a Tampa 2 variant.

This defense is a Tampa 2 because defensive coordinator Bob Gregory is dropping the MLB into the deep middle 1/3rd of the field -- which is the determining factor for identifying a Tampa 2 defense.

The typical Tampa 2 defense has four underneath zone defenders (with four pass rushers).  However, on this play, Gregory has utilized five underneath zones.  This is what makes this play a slight variant on the Tampa 2.

Do you see what happened now that you know the offensive receiver routes and the defensive coverage?

Let's go back to the picture of the Oregon receiver routes.  As you can see, the twin WR routes are running deep routes (deep comeback and deep out), designed to run-off and push back the coverage, so that the TE may come underneath for an easy and unimpeded catch.  That's exactly what happened here.

Oregon's offensive coordinator, Mark Helfrich, is simply stretching the zones.  He's specifically targeting the outer-most underneath zone defender to the side of the twin WRs.  He's putting that defender in a bind.  That defender is forced to drop back in his zone to get proper depth and help maintain his spacing underneath the deep WR routes behind him; however if he gets too deep then he allows for an easy and uncontested catch by the TE (Dickson) underneath him.

So that's what happened on this particular play, and Dickson's second catch.

Now, let's look at what happened on another Dickson catch.  This time we're going to look at Dickson's fourth catch of the game. 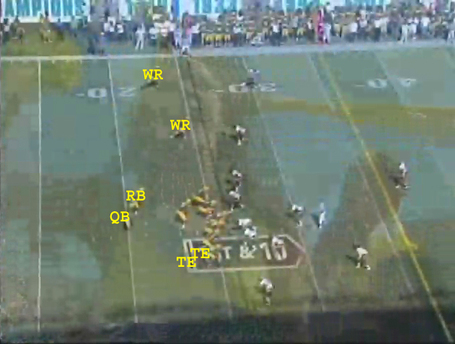 Above is the pre-snap picture (I apologize for the slight ghosting of the Oregon cheerleader, but the stupid ABC coverage didn't fade to the play early enough for a clean enough picture of the pre-snap picture prior to the snap).  Oregon has 12 personnel out on the field again (2 WRs, 2 TEs, 1 RB). 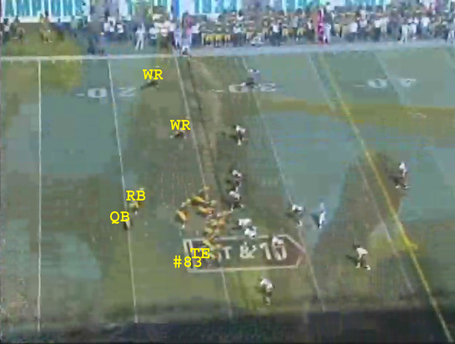 Where's Dickson in this pre-snap picture?  Well, he is the TE off the line of scrimmage (LOS).  I've shown his pre-snap position with his number, #83, in the picture above (although he has already gone into motion in the screen shot above).

Again, Dickson is in the same spot on this play as he was when Dickson caught his previous pass.  Interesting! 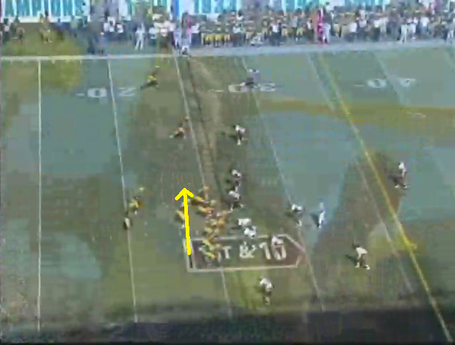 Prior to the snap, the Oregon offense puts Dickson into motion across the formation towards the twin WRs.  Hey wait, that's what happened in the last play too!  Interesting! 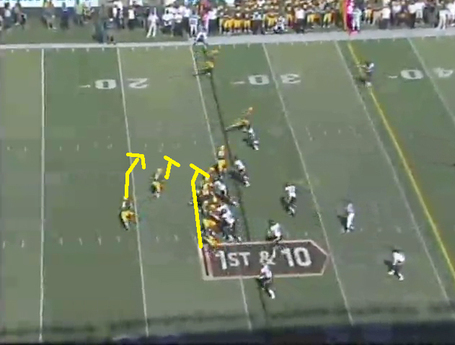 Here's the post-snap picture.  Again, the first thing to notice is Oregon sliding its protection over towards the twin WRs as the QB rolls out in the same direction.  The Oregon RB pass blocks towards the direction of the roll.

Hey, wait!  That's exactly what happened in the previous play too!  Yup! 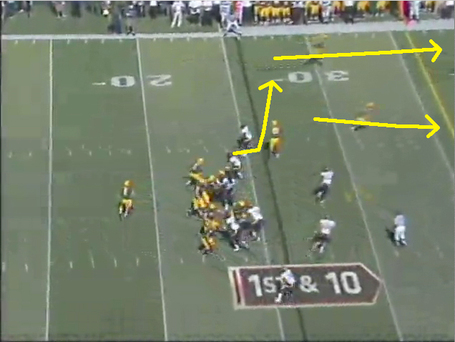 Those are the very same routes.  This is the same formation.

THIS IS THE EXACT SAME PLAY AS THE PREVIOUS PLAY.

Heck, we might as well name this play.  Let's call it the "sprint out pass to Dickson in the flat" play. 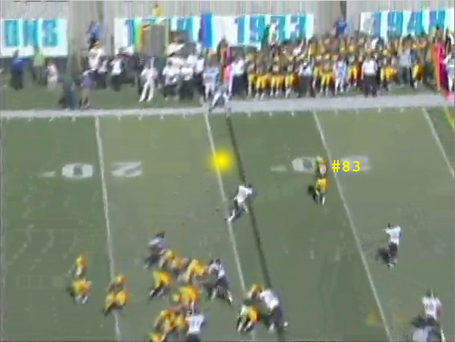 Not surprisingly, Dickson is open, for an easy pass and catch (yellow dot is the ball). 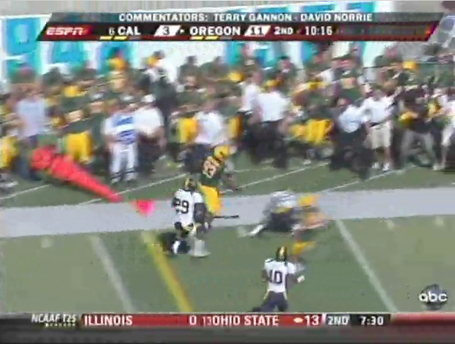 Dickson makes the catch and gets an easy first down. 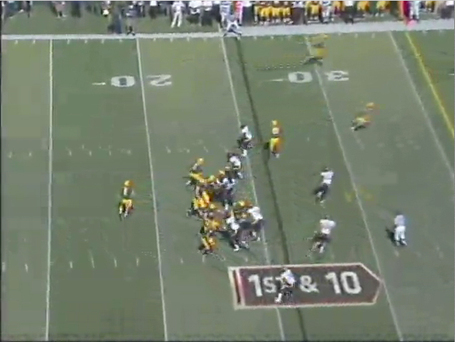 So what the heck was the defense doing on this play?  Anything different?  Did it know Oregon was running the same play again?

I don't know if the defense knew that this was the exact same play, but let's take a look at what they're doing.  Above is the picture of the play just after the snap. 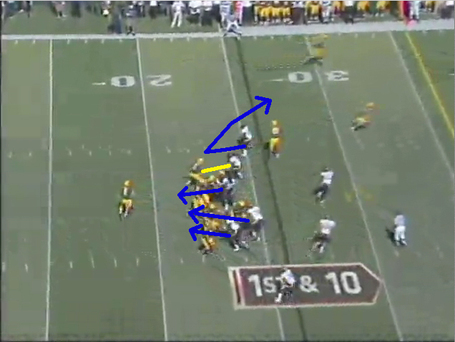 As we can see, Gregory has sent at least three pass rushers at the QB.  I say "at least" because the assignments on this play are not clear-cut.  There are definitely three dedicated pass rushers on this play.  They are the three bottom blue arrows.

A Cal LB (#9 - Young) seems to be on a hug assignment -- meaning that if the Oregon RB releases on a route, then the defender will play man coverage against the RB, alternatively if the RB stays in to pass block, then the defender will pass rush.  When you watch the video of this play, you'll see the LB sort of hesitate to read the RB before deciding to rush the passer.  I've shown this hug with a yellow line.

Also, Cal defensive coordinator Gregory seems to have sent the safety (#29 - Ezeff) at the QB.  The safety begins to rush the QB, but then pulls up, once he realizes the Oregon QB is about to pass the ball over his head to the TE.  Thus, the safety abandons his pass rush, and once the ball is in the air on its way to the TE, he turns around and begins pursuing the TE. 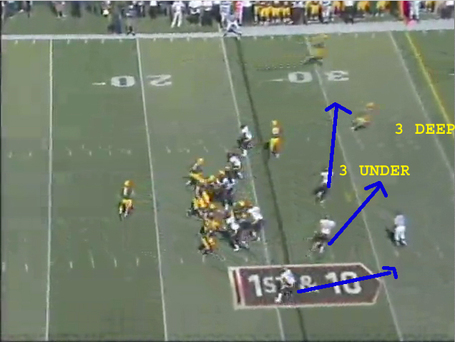 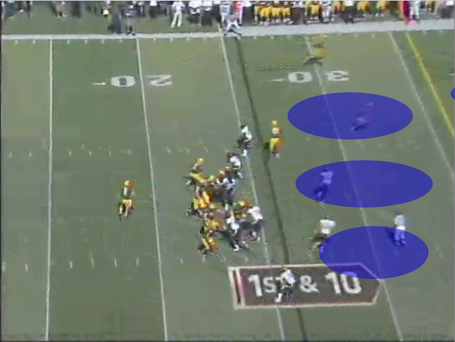 I've shown the underneath zones in the picture above. 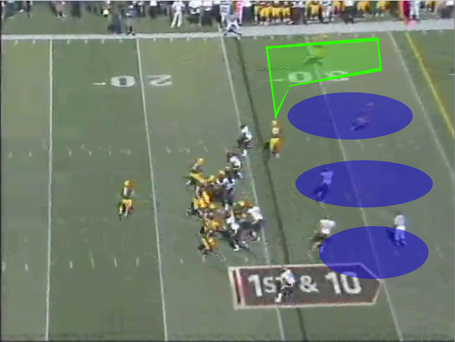 Unfortunately for the defensive playcall did not match up well against this offensive play.  With only three underneath zones, there are big holes between the zones, as well as along the sidelines.  I've shown the big hole to the outside where an offense can attack with only three underneath zones with the big green area.  And of course, this is exactly where Dickson was and made the catch.

To view the video of this play in its entirety, click on the link below (it will open a Youtube video in a separate window which I have set to start at the appropriate time):

These two plays are the first of many, which demonstrate how Oregon's TE, Dickson, had such a great day.  As we saw in the first play, Oregon was simply stretching zones and hitting the TE (Dickson) on a short pass underneath the stretched zone.  In the second play, the same play was executed against a different zone defense.

Now that this play ("sprint out pass to Dickson in the flat") has been called twice -- in only the first 20 minutes of the game nonetheless -- this is something that Gregory ought to be on the look-out for.