Share All sharing options for: Daniel Lasco pledges to Cal 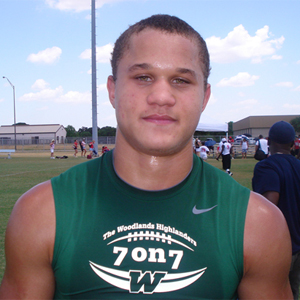 Daniel Lasco is your seventh pledge of the Cal 2011 class.  A running back from The Woodlands High School, Lasco was selected to the preseason All-Greater Houston High School Football Team [1]. He came to visit Berkeley last weekend and made a decision to pledge to Tedford & Co [2].

“When Daniel was there he was excited about the campus and their program. But what stood out was how their coaches are focused on education,” Woodlands coach Mark Schmid said. “They also sold the fact that Cal has the most active running backs in the NFL today.”

“They want him to play his freshman year in a limited role like a kick returner. That’s what they’ve done with previous top backs,” Schmid said. “He feels like he’ll get the opportunity to be starting back as a sophomore if he proves himself [4].”

Lasco is one of the more intriguing running back prospects in this class. He is built more like a split end than a compact running back but has great straight-line speed and acceleration. Very productive with a high yards per carry. Picks and darts his way through traffic well with good feet and vision. A smooth, gliding runner. Flashes great burst through the second level when he finds a North-South seam. Very quick and explosive for a taller back; one cut and go type of runner who can pop a big run on any given carry. His wiry, quick-twitched frame is very difficult to wrap up cleanly. Runs with good lean, balance and keeps his legs and body moving on contact. Spins out of a lot of arm-tackles and reaches top-speed extremely quick when he breaks free to daylight. A big-play back. Has a excellent second gear and a long, smoother stride. Possesses good hands out of the backfield and transitions smoothly after the catch. Very dangerous in space. Shows good lateral agility and jump-cut skill; a sharp cutter. However, he does lack great downhill power and strength at this point to run consistently between the tackles at the major college level. Appears a bit straight-lined and stiff through the hips at times, despite being shifty. Could struggle trying to pick and slide through traffic as an inside zone runner. Overall, Lasco is still a high upside guy who may be hard to pass on with his great acceleration and size. Could develop into a real weapon in a change-of-pace type role or even get a look at receiver, H or defensive back [5].

Barry Every of Rivals has the following notes on Lasco -

On the Hoof: Lasco is very lean and muscular with absolutely no bad body weight. His long build makes him look more like a receiver or safety than a running back.

Needs Improvement: He is a tall and lean for an every-down back, so adding muscle mass while keeping his speed will make him harder to tackle and more durable. Lasco could also improve his change of direction a bit, improving his ability to make people miss.

Most Impressive: Lasco possesses excellent overall speed, and is dangerous as a pass receiver downfield. His body type and skill set also allow him to project as a receiver or safety at the next level. He also has the potential to become a dangerous kick returner at the next level.

Conclusion: Could make an impact early as a return man or as a gunner on punts and kickoffs. Look for him to redshirt as he finds his fit with whatever college he ends up attending [6].

Lasco is an average sized running back with above average skills. He does a great job of accelerating through the hole and then taking it up another notch when he has daylight. A very smoothe runner, he makes it look effortless. He has very good speed to go with his acceleration and runs in a compact motion. His size does not make him strong between the tackles, but his quickness allows him to get yards between the tackles [7].

Another versatile pick-up by your Golden Bears' coaching staff. Sources also indicate that Lasco is quite a love assassin [8].