Ranking The Big Games Of The 2000s: You Spoke Out!

Share All sharing options for: Ranking The Big Games Of The 2000s: You Spoke Out!

Well, here we are. The final post in our Ranking the Big Games of the 2000s. First, we went through each of them in the order created by the CGB mods. We ended with controversy with 2002. And that was great. But then it got better! Because you got a chance to speak out. You got a chance to vote on it.

You can see the links to all of the individual Big Game posts in that link above there. After the jump, let's take a closer look at what you guys thought about the 2000s Big Games. GO BEARS!

First up, let's look at the chart (helpfully created by Berkelium97) of all the votes. Click on it to make it larger: 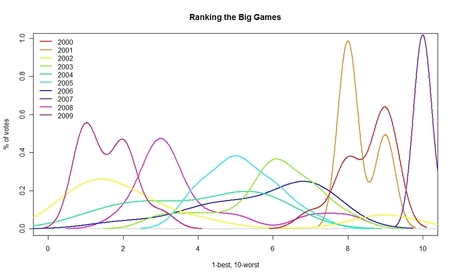 You can see the percentage of voters who ranked it at the various ranking points. You can see that the vast majority put 2007 last. You'll also notice that unlike us mods, the majority of readers (about half) put 2009 as the best of the Big Games. You can see the fluidity of the results there.

But that wasn't the only data we collected. We also got a bunch of comments about each Big Game. Thanks to the commenters who left comments!!! Let's take a look at those:

2000 -OhioBear - Total buzzkill. We made a great comeback only to lose it in OT. And the game winner was scored right in front of me in the north end zone. FML.

grinandbearit - We lost in OT. Just painful and traffic after the game sucked, too.

2001 - Oski4Heisman -My first Big Game as a student. At this point, losing wasn't a surprise and the festivities surrounding the game were fun. Best way to lose a Big Game.

OhioBear - We circled the wagons for this one and had a "chance" with a Hail Mary on the final play. Still a loss. Though I do wonder if Stanfurd felt as meh about this Big Game win as I did about the 2006 Big Game win for Cal.

sycasey - We were still playing football back then?

katster - Don't really remember much of it -- rooting for the "perfect" season, and this was just another loss on the way to that goal. Of course, we didn't obtain it, but hey, the Rutgers game was a win-win situation. ;)

(It's kinda like when your baseball team is getting blown out -- you start hoping the other pitcher will throw a no-hitter just to make the game interesting.)

swamphunter - Last one under Holmoe. At least greener pastures were in store for Cal in the future.

Oski4Heisman - My 4th Big Game in person (plus a couple on the radio). My first win. Indescribable jubilation. This was one of the few times I threw up from drinking too much. Totally worth it.

katster - The one that ended the losing streak. Perhaps 2009 was better if you don't consider that in context, but 2002 was my triumphant return to Cal for grad school, and the first win I'd ever seen in the series. The Axe finally returned to Berkeley, where it belongs. Sure, the game was anti-climatic in the end, but I was on pins and needles the whole way. Cal *never* won a big game. It wasn't until the crowds started swarming the sideline that I realized that, yes, we had actually done it.

Hell, I'm crying right now remembering the sheer joy of it. So it's my #1.

Grinandbeart - This was huge at the time, but looking back at all of the Big Games of the decade, I'd still have to rank this as the 2nd best of the decade. We really took it to Stanford in this game, and that was great in and of itself, but there wasn't any real drama to this game. Going into it, we sort of expected that we would win and that we would finally take back the Axe. It was great and cathartic, but there was something missing from it.

That said, taking down the goal posts and marching one of them down to Upper Sproul and leaning it against Sproul Hall was classic, but that was after the final whistle.

OhioBear - Glorious, victorious! The 7 game streak. Is. Over.

2003 -OhioBear - This was a fumblfest early and we were down 10-0 at halftime. But we dominated the game statistically and really took it to the Furds in the 2nd half. Geoff MacArthur was unstoppable: 16 rec., 245 yards! This game was particularly gratifying because we needed a win to get the Insight Bowl bid.

sycasey - Underrated -- a must-win game to put us in our first bowl in years. Came back from an early deficit to seal the deal.

katster - don't really remember this game, despite being present for it. It was a win. The first one I saw on Stanfurd's campus. That will do.

2004 -Grinandbearit - There was our running game, and I think I distinctly remember Ryan Riddle tearing their QB another hole.

OhioBear - This felt like a Rose Bowl celebration. Unfortunately, it didn't turn out that way, but it was still a glorious victory. We took care of business in a BIG way. And the Beast Mode 59 yard TD run in the 3rd quarter was definitely one of Cal's many signature moments of the season.

GB4188 - As I recall, Stanfurdians were so frustrated by the absolute pounding being delivered to them that they started picking up some dirty personal fouls and even one ejection. That's when you know you've achieved not just victory on the field, but that soul-crushing victory over the mind.

katster - I don't want to complain about a big game win being boring, particularly a blowout on our side, but this one, in all honesty, was. But that's the 2004 team for you -- strong wins, a tight loss to the team that ended up being #1, and then the nastiness. No, not relieving that.

2005 -OhioBear - This one was satisfying. Coming off two straight losses and starting Levy at QB for the first time, and with Stanfurd desperate for a win to be bowl eligible, it wasn't looking like a game we were destined to win. But we dominated Stanfurd physically. It was a beatdown. And the halfback pass by Terrell Williams for the last TD was a nice touch.

sycasey - Steve Levy folk-hero story keeps this in the upper half of the rankings.

katster - This was the first (and sadly, at the moment, only) Big Game I attended at the Farm as an alum. The thing I remember most about this Big Game is that we seemed to have a sack clinic going on that day. Between that and the Levy TD to Jackson, it was a good day. (Especially since we didn't lose to a team that lost to UC Davis! Haw!)

GB4188 - <3 Levy. My memories of him are this game and when he ran up the score on ATM (which my cousins attend) to get a senior a final TD.

swamphunter - Levy stapled his ticket to Cal lore with this game. He will always be a hero in my book.

2006 - sycasey - Easily the least satisfying win. Cal played one of their worst games of the season (coming on the heels of two soul-crushing losses), but managed to win only because the 'Furd really were that bad in '06. Very dull game for long stretches.

swamphunter - AFAIK, we just wanted to go to our bowl game and kick someones ass for getting tripped out of the Rose Bowl. AGAIN.

Oski4Heisman - Of all of our wins, this was the most "meh"

OhioBear - The "worst" of our Big Game victories in the decade. Great moments were few and we kept a truly bad Stanfurd team in the game way too long. But we won and that's the important thing. If winning the Big Game and keeping the Axe is wrong, I don't wanna be right!

katster - This was the first (and sadly, at the moment, only) Big Game I attended at Cal as an alum. I think the only reason I put it so high is that it was bitterly cold that December day and Syd returned an interception for a touchdown, losing his shoe in the process. It worked. We won. Always good.

OhioBear - In my opinion, this is the worst loss of the Jeff Tedford era. By far. We played as if we forgot the Big Game actually meant something to us.

Oski4Heisman - Let's not go there.

katster - Was hoping we wouldn't lose twice in a row. That would make the forces of evil insufferable. Of course, it started out as a mess, and I feared the worst, but then we got back in it and blew them out. Take that, Mr. Enthusiasm Unknown to Mankind. It felt good!

sycasey - The most entertaining single quarter (3rd quarter) of any Big Game.

Oski4Heisman - Nowhere near '02 and '09, but winning the Axe back was crucial.

Grinandbearit - I say this is the best of 'em because Cal and Stanford were both above average teams, and Stanford seemed like they might just dominate us in this game with their more balanced offense. Plus, they went up 14-0 on us quickly, so who wasn't thinking they were just going to run up the score on us as our feeble defense tried to stop them?

Then, Cal just stayed in it somehow, and in the process they gave Stanford a dose of their own medicine. We ran the ball down their throats and did what seemed like the only thing we could do to win the game: keep the ball away from their offense. We had almost a 2:1 time of possession advantage, and Shane and the offensive line played a great game and just kept on grinding out yards and eating clock. Plus, Good Kevin showed up and didn't throw away the game. Oh, and just when we thought our defense might lose it all for us, Mohamed comes up with a game-sealing interception close to the goal line. Must-see TV in my opinion.

Sure, they got a little conservative at the end, but Cal really showed a lot of heart and in front of all of those Stanford fans.

This was the most impressive to me. Plus, as a bonus, the booing of Tiger at halftime was funny in retrospect, but I guess that's not part of the game.

So you can imagine my shock when I finally tuned into the game to find Cal winning, and driving for another score. I got to where I was going at halftime, and immediately tuned the game on the Internet. Slowly, oh so slowly, we get through the second half, as Cal threatens to break the game open, Stanford gets back into it, then the inexplicableness of calls in the last three minutes, then an Alamar special and no, we're going to lose this game. Figures. Stupid Bears.

About this point, I kept losing the feed. So the last I heard was Gerhart's rumble past the ten yard line, and then I lost the feed. I frantically try to get it back, and get it back just as Starkey's screaming "INTERCEPTION!" and I'm trying to figure out what happened. Slowly, it dawns on me that the Prophet has handed me an Axe as a birthday present.

But it doesn't quite beat 2002 in the euphoria department. Close call, though.

OhioBear - For my money, the best of the decade. We were underdogs given no real chance of actually winning this game against Toby "Heisman" Gerhart and Andrew "Future Heisman" Luck. BOOM! VEREEN'd and PROPHET'd! I got your hubris right here, Stanfurd

Oski4Heisman - Don't call us underdogs against the 'furd. Ever.