In case you missed the previous posts in this series, you may find them here: Part I: The DL Zone Read.  Part II: A Defensive Stop.

One of the biggest gripes by many Cal fans regarding the 2009 Cal @ Oregon game, was the inability of the defense to cover the Oregon TE Ed Dickson.  On the day, Dickson had a total of 11 catches for 148 yards, and 3 touchdowns.

So as I re-watched the game, I tried to keep an eye out for why Dickson was getting so open, and was being so successful.  Upon watching Dickson's first touchdown, I discovered the reason for his first success: the Cal defense got baited, and there was a busted coverage.

Please join me, as we take a look at what went wrong.

The key to understanding what went wrong on Dickson's first TD catch requires us to look at a different play first.  Why does what occurred on a different play matter for Dickson's touchdown play?  Because in football, each play is not mutually exclusive.  Each play is not independent.  Plays are dependent on each other.  Plays are related.  Plays are sequenced together in an intelligent, purposeful patterns in order to bait the defense (for a great example of this strategy, please read my previous 2007 Cal vs. Tennessee post).  So let's look at the first play. 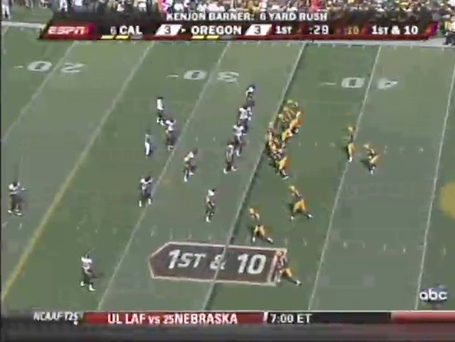 Here is the pre-snap picture. 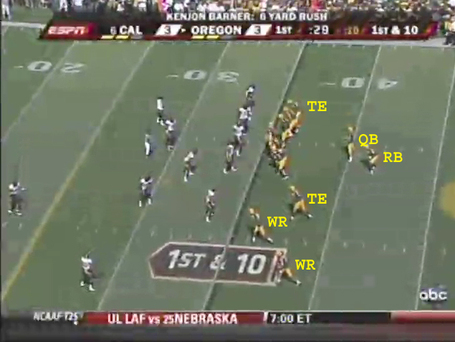 Oregon has 12 personnel out on the field (2 WRs, 2 TEs, 1 RB).  They are aligned in a trips formation with one of their TEs in the near slot. 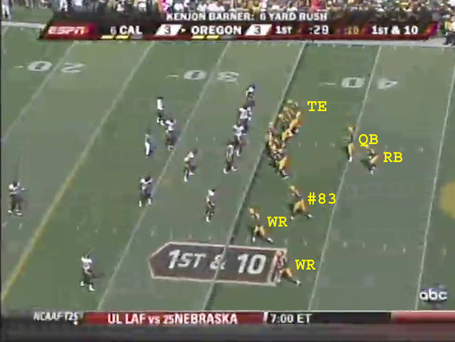 That TE in the near slot is #83 tight end Ed Dickson.  Based on this formation, you should immediately know what the offensive play will most likely be. 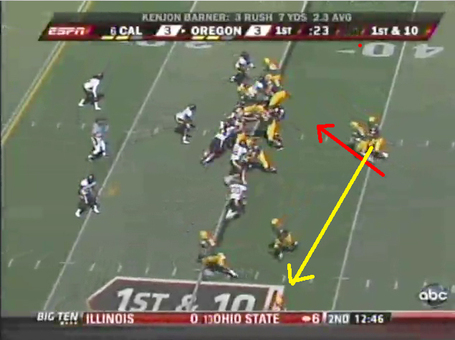 The play is a run/pass option, more specifically an inside handoff or wide receiver bubble screen option.  The QB has the choice, based on the what the defense presents to him, of either handing the ball off to the runningback (red arrow), or passing the ball out to the WR in the trips. 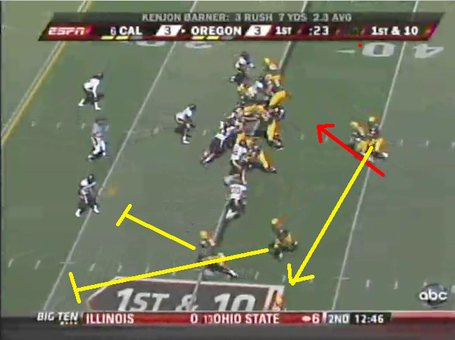 Regardless of whether the QB hands off the ball, or passes the ball, the non receiving receivers in the trips formation will block defenders. 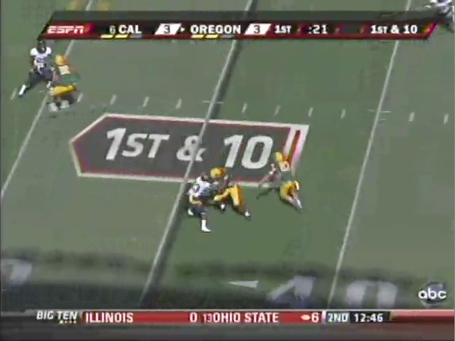 On this particular play, Oregon's QB, Masoli, chose to pass the ball.  He passes the ball to the outer-most WR in the trips.  That WR cuts inside behind his blockers. 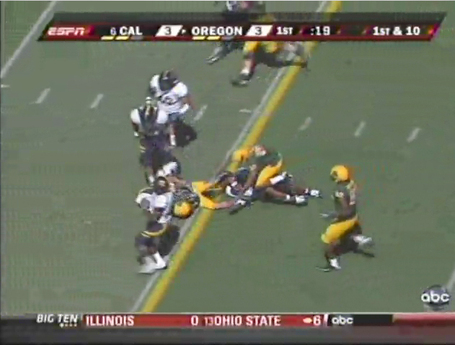 And runs for a 9 yard gain.

This is a very common and basic play for any shotgun spread team.  Cal has seen this play before from Oregon in previous years, and probably from the tapes of Oregon from this same year.

Now, let's get to the next play. 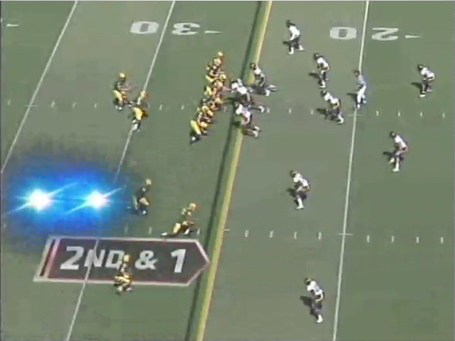 And by next play, I mean, THE VERY NEXT PLAY.  Yes, this next play was immediately following the previous play (the offense is headed in the opposite direction because the 1st quarter ended right after the first play, and this second play is immediately at the start of the 2nd quarter).

Above is the pre-snap formation.  Notice anything?  I hope you do.  It's quite obvious. 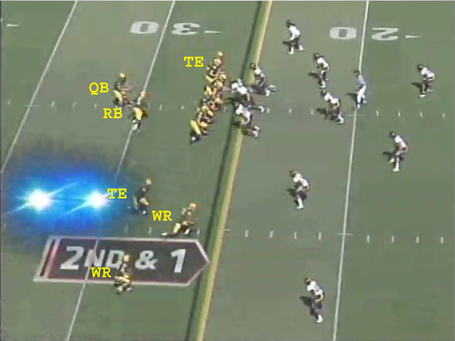 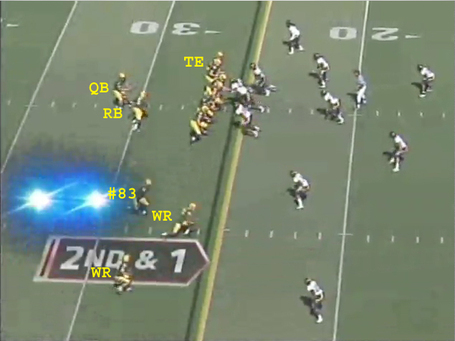 Oregon's primary TE, Dickson (#83) is again in the near slot. 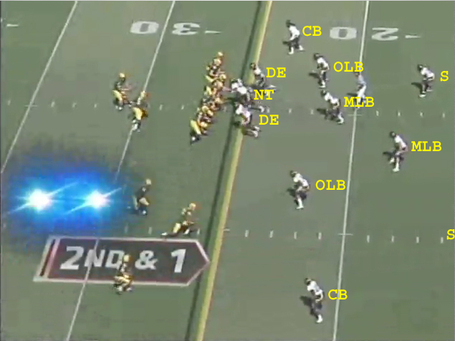 Cal counters with its 3-4 defense.  Again, something in the picture above should jump out at you.  Hopefully, ya'll see it.  We'll get to that later. 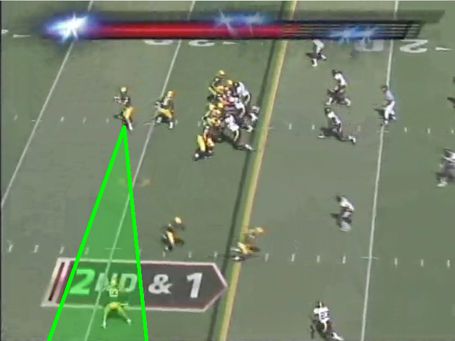 Immediately following the snap of the ball, the Oregon offensive play looks exactly like the first play: an inside handoff WR bubble screen option.  Masoli even looks at his outer most WR to pass (green vision cone). 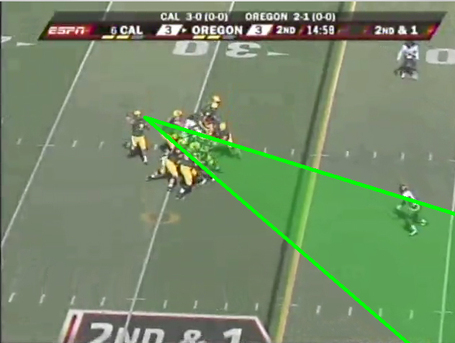 But then Masoli suddenly looks down the field (green vision cone).  It's a fake.  It's not an inside handoff WR bubble screen option. 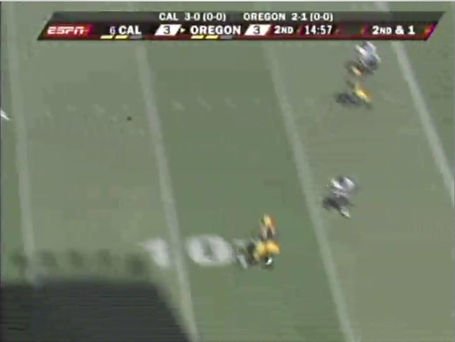 It's a designed passing play (can you tell why?).  Masoli looks downfield towards Dickson who is running along the field numbers.  Cal safety, Ezeff, is caught out of position. 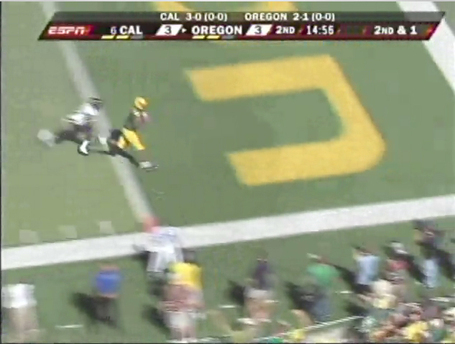 And Dickson catches the ball for a touchdown. 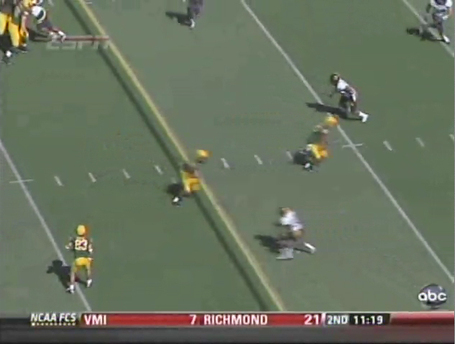 Let's go back and see what the heck went wrong in the coverage.  Here's a view of the trips formation just prior to the snap. 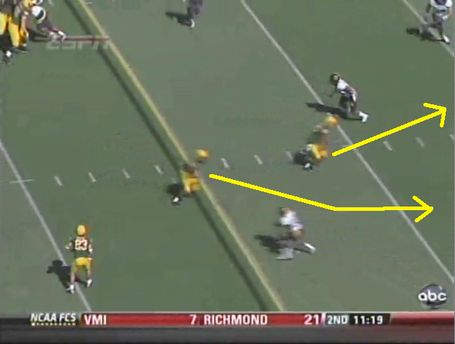 The first clue that this isn't an inside handoff WR bubble screen option, is the fact that the other trips receivers are not blocking the Cal defenders, but releasing on routes down the field.  The second clue, is the blocking technique of the offensive linemen.  They don't explode out of their stances into the defensive line and push up field, but drop back into pass technique.  Hence, clearly, a designed pass play meant to look like the previous play. 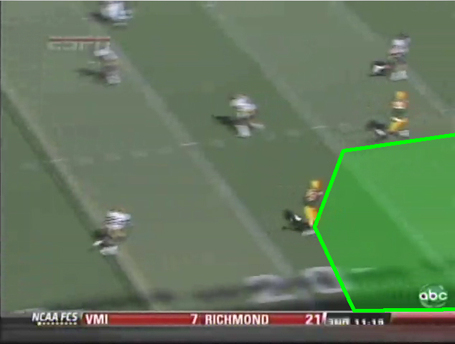 The fake WR bubble screen has pulled the Cal cornerback (CB) down below the line of scrimmage, leaving a huge void where Dickson may catch the ball.  However, the Cal CB isn't really to blame for this touchdown. 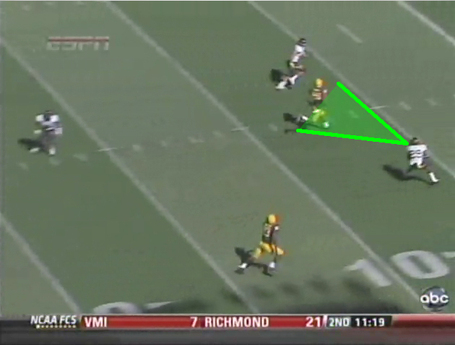 Instead, the blame is really on the safety, Ezeff.  Ezeff is caught, looking and covering the other Oregon WR who is attacking the right hash seam, and leaving his back to Dickson down the right numbers. 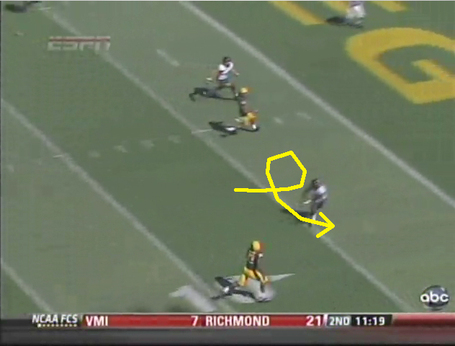 Ezeff attempts to turn himself around quickly to make a play on the ball... 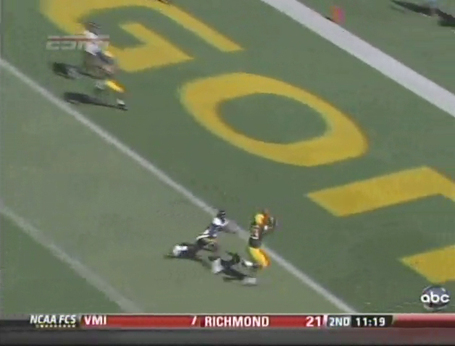 But can't do it in time, and allows for the touchdown.  This is the busted coverage.  But what was the coverage? Let's go back to the pre-snap picture.

Above is the pre-snap picture for the second play (the second safety is hidden off the screen but I put an "s" to show where he is relatively).  Based on the defense's alignment, you should at least have an idea of what the defense might be playing.  I'm sorry if I'm stating the obvious, again, but it's TAMPA 2!

Notice how the middle linebacker (MLB) to the open side of the field is playing so deep?  That hints at Tampa 2!!! 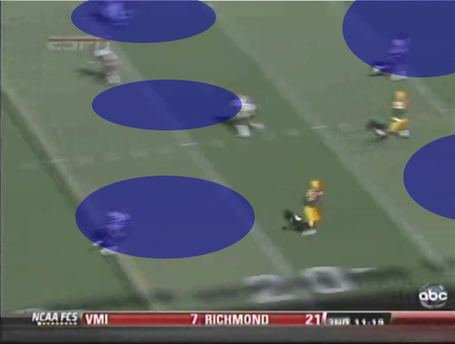 Above is a down-field picture of the Tampa 2 coverages.  The Cal safety, Ezeff, has responsibility for the right 1/3rd of the deep zones.  He has to cover any receivers entering his third of the field.

But as we saw from a previous picture, which I've shown above again, Ezeff is caught giving coverage aid to the MLB (Mohamed) in the middle deep 1/3rd zone, and has lost sight and awareness of Dickson in his zone.  Ezeff  should be a few more yards towards the sidelines, and playing over Dickson to prevent the pass to him.  It's imperative that the safeties in a Tampa 2, be aware of any receivers down the sidelines who come into their thirds of the deep zones.  Because the safeties, and the safeties alone, are the only players who can prevent passes to those areas.  If a pass goes to the middle, both the MLB and the safeties can make a play on the ball.  However, a pass to a receiver down the numbers or sidelines can ONLY be defended by the respective safety to that side.  In other words, the safeties should be playing outside to in, rather than inside to out.  Since Ezeff was playing inside to out, he gave up the outside -- where he has no help to make a play on the ball.

This is the busted coverage.  This touchdown falls squarely on the shoulders of Ezeff.

The busted coverage is much more visible when watching the actual video of the play.  To view this second play in video form, please click on the link below and watch from 0:10 to 0:29 of the video:

(clicking this link will open a new window to a youtube video, and I have pre-set the video to start at the appropriate time) http://www.youtube.com/watch?v=SVnjYGD_ewE

These two plays illustrate the baiting of the defense, and the busted coverage.  Interestingly, the bait didn't really confuse the defense that much.  While the CB to the bubble screen side of the field did bite hard on the bait, the Cal safety to that side (Ezeff) wasn't pulled down.  He did remain in coverage, but lost awareness of Dickson entering his zone. So in my opinion, the real fault for this touchdown is due to the busted coverage, rather than the bait.

Thus, what would otherwise be an easy break-up by a safety should they have been properly positioned and aware in this Tampa 2 defense, turns into a touchdown.