It was hot out, my laptop was melting, and I had already heard from Tedford and Mohamed.  My enthusiasm, as much as I hate to admit it, had fallen to levels known to mankind.  That is, until Jim Harbaugh took the stage and provided some comedic relief.  That raised my enthusiasm levels and helped get me through the day, as I did a favor for our friends at Building the Dam, managed not to say anything inappropriate in front of Chip Kelly, and even had a chance to say hi to Ted Miller.  After I finished the day by talking with Mohamed and Tedford, the Pac-10 Media Day ultimately proved to be a success, even if I didn't get a chance to talk to the elusive Jim Harbaugh.  Next year we'll find out what his deal is...

If three days' of CGB coverage hasn't been enough, check out Conquest Chronicles' coverage of the first five press conferences.

After the Cal press conference we were given a fifteen minute break and a chance to get out of the sun for a bit.  I grabbed a gatorade that the Rose Bowl staff provided for us and then looked around for someone interesting to talk to.  Ted Miller was nowhere to be seen.  Tedford was hiding.  Mohamed was gone.  But I did happen to run into Joey Kaufman and Julio Nievas of Conquest Chronicles.  We conversed a bit about the media day, our expectations for our teams this season, and, of course, we made some Masoli jokes.  Speaking of which, with breaktime coming to a close, we had to return to our seats where our laptops may or may not have been waiting for us.

(As usual, click each image for a larger version) 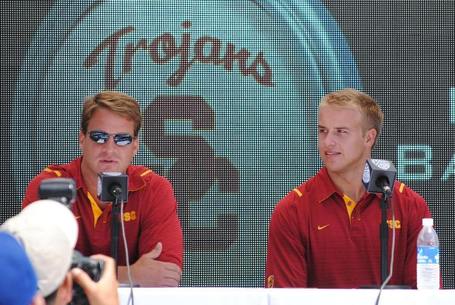 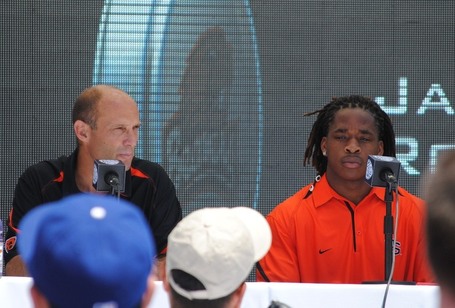 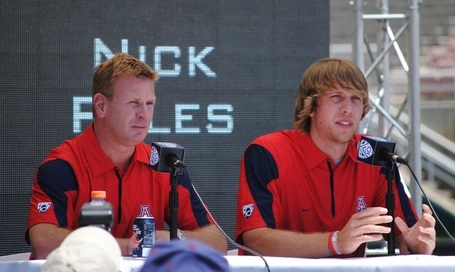 Oregon: Chip Kelly and DE Brandon Bair
If you've been paying careful attention, you'll notice that the purple gatorade by Chip has been there in the last several photos.  Someone left it there during a press conference and no touched it after that. 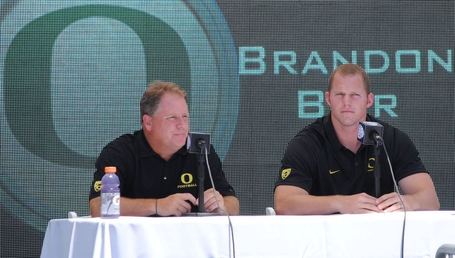 By now (and most of the time when the final five teams were on stage), many people were no longer watching press conferences.  They found shade, drank beverages, went inside the Rose Bowl facilities, or interviewed coaches/players.  Incidentally, they managed to get to the food first when it arrived for the luncheon.  They also happened to take all the tables with shade.  Like last year, each team had its own table.  But unlike last year, most players and coaches were nowhere to be found at the start of the luncheon.  This made interviewing them...a bit more complicated.
I met up with Joey again and grabbed some food.  He planned on going to the USC table and I planned on going to the Cal table.  The abundance of LA media filled up the USC table way before we even got our food.  Thankfully, the Cal table had a few seats.  When I went to take a seat, I was told that they were all reserved.  Great.  Joey and I looked around for a place to sit and had to settle on the one table with a few open seats: Oregon.  Naturally, this table was in the sun.  All the shaded tables were full (even Wazzu).
Not five minutes after I sat down, none other than Chip Kelly pulls up a seat and sits next to me.  Any member of Addicted to Quack would be delighted by this turn of events, but I was not quite prepared to talk to him.  I simply didn't have anything interesting to say to him or to ask him.  He asked me how I am and I think I said something about how it was hot out and that Oregon probably doesn't get weather like this.  Anyway, my stream of thoughts is no longer in "ask-reasonable-questions-about-generic-topics-such-as-season-outlook" mode.  Instead my every thought is something like "I bet Masoli would have had a field day with all these unattended laptops here!" or something else that would have been wildly inappropriate.  Thankfully, someone else at the table got Chip talking (he seems like a quiet, reserved guy).  I finished my lunch and left the Oregon table without incident, and looked to find Tedford or Mohamed.
Tedford and Mohamed were nowhere to be seen.  In fact, most coaches were still in hiding.  Kelly, as I was all-too-aware, was there, as was Harbaugh.  I wanted to talk to Harbaugh, but his table was full.  He was deep in conversation with someone.  Mike Stoops was talking to someone and Nick Foles was busy eating.  To pass time, I joined the throng of reporters gathered around Matt Barkley.  "When in LA..." I suppose.
A little while later, I noticed Mike Mohamed had arrived at the Cal table, but Tedford wasn't there yet.  Harbaugh was still talking to that same guy, so I couldn't talk to him.  I figured I'd talk to Mohamed until Tedford arrived, after first verifying from Herb Benenson that Tedford would actually show up.  On my way, I noticed Ted Miller was the only one at the Oregon State table!  I took a brief detour to say hi to him.  He was trying to upload a video, but the miserable wireless network was making that all but impossible.  If I didn't know any better, I'd guess that he's still there trying to upload it.  He seemed quite happy to hear that I was from CGB.  He praised the site and said that he really appreciates the work we put into the site (as well as our sense of humor).  That he consistently links to us is an indicator of how highly he thinks of the site.  He also mentioned that he spoke to Yellow Fever in NY (he remembers you, YF!).  I thanked him for linking to us so often and wished him luck with the unbearable wireless network.  Happy to have been able to catch Ted, I headed over to the Cal table.
As we saw yesterday, I gathered a wealth of information from Tedford and Mohamed.  In fact, by the time I was finished with the Cal table, most coaches and players looked like they were getting ready to go...except Harbaugh who was still talking to that same guy (why was he talking to him for so long?).  It looked like I wasn't going to be able to talk to Harbaugh after all.  I couldn't talk to him about his twitter account, I couldn't coax him into saying "hubris," and worst of all, I couldn't ask him "What's your deal?"
There's always next year...