Share All sharing options for: Richard Rodgers pledges to Cal 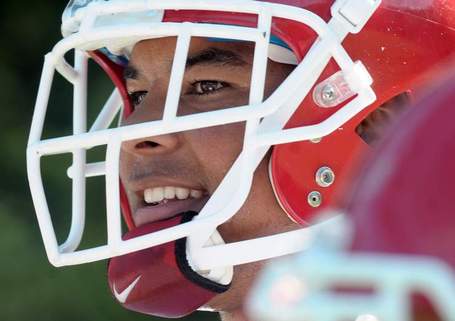 Richard Rodgers is your eighth pledge of the Cal 2011 class.  An athlete from St Johns High of Shrewsbury, MA, Rodgers attracted scouts' attention because of his tight end size but wide receiver speed [1].  Rodgers was a recent addition to 2011's Rivals250. Tedford & Co are projecting Rodgers at TE. During the summer, Rodgers came to visit Berkeley unofficially on three different occasions before making the decision over the weekend to pledge to your Golden Bears [2].

Having family around helped Richard made up his mind. Rodgers' mother Mindy still lives in the area.

Boston College, Maryland, Notre Dame and Oregon were also high on Rodgers’ list but Cal won out and Lupoi was a big reason. His relationship with tight ends coach Jeff Genyk also played a significant factor.

"I really like his personality, he’s a great guy and he’s very down-to-earth," Rodgers said of Lupoi. "He’s not going to lie.

"He’s not going to tell me something that’s not true and say I’m going to play receiver or play safety or something ridiculous when I’m not. I feel he’s very truthful and forthright with me [4]." (HT boomtho)

Rodgers is another good tight end prospect from the state of Massachusetts. He will play on both sides of the ball in high school, but we feel he will fit best on offense in college. He has good height and solid bulk and looks to have the frame to be able to add more good size with time in a college weight program. He looks to come from a predominately spread attack and can be a productive target in the passing game, but at the college level looks better suited for a role as more traditional in-line tight end. Regardless of how he lines up he can help move the chains in the passing game. He displays good quick hands and can consistently extend for the ball. He displays good concentration and the ability to use his body to shield defenders from the ball. Will flash the ability to go up and get the ball, but you would like to see him do that a little more. He has a good set of hands, but does not display great speed or the ability to stretch the field. With his hands though and some sharper route running he can be a productive short-to-intermediate target. He will likely need to develop as an in-line blocker. He will display some physical toughness on defense that would lead you to believe that with some added bulk and work on technique he could be a productive in-line blocker. He displays the ability to get hands and can move and stay between his man and the ball. He will need to work to bend more and derive better power from his lower body. Rodgers needs to develop aspects of his game, but the kid has a good frame and good hands and with some time could develop into a good college tight end [5].

Rodgers is part of Cal's rich legacy. Richard Sr. '92, currently the Defensive Coordinator of the Holy Cross Crusaders, was a key instigator in "The Play." (HT Ohio Bear)

Harmon squibbed the kick and Cal’s Kevin Moen received the ball inside the Cal 45 near the left hash mark. After some ineffective scrambling, Moen lateraled the ball leftward to Richard Rodgers.

Rodgers was very quickly surrounded, gaining only one yard before looking behind him for Dwight Garner, who caught the ball around the Cal 45.

Garner ran straight ahead for five yards, but was swallowed up by five Stanford players. While Garner was being tackled, however, he managed to pitch the ball back to Rodgers. It was at this moment, believing that Garner had been tackled and the game was over, that several Stanford players on the sideline and the entire Stanford band (which had been waiting behind the south end zone) ran onto the field in celebration.

Rodgers dodged another Stanford player and took the ball to his right, toward the middle of the field, where at least four other Cal players were ready for the next pitch. Around the Stanford 45, Rodgers pitched the ball to Mariet Ford, who caught it in stride. Meanwhile, the Stanford band, all 144 members, had run out past the south end zone—the one the Cal players were trying to get to—and had advanced as far as twenty yards downfield. The scrum of players was moving towards them.

Ford avoided a Stanford player and sprinted upfield while moving to the right of the right hash mark, and into the band, which was scattered all over the south end of the field. Around the Stanford 27, three Stanford players smothered Ford, but while falling forward he threw a blind lateral over his right shoulder.

Moen caught it at about the 25 and charged toward the end zone. One Stanford player missed him, and another could not catch him from behind. Moen ran through the scattering Stanford Band members for the touchdown, which he famously completed by running into unaware trombone player Gary Tyrrell [6].

Rodgers is also a basketball standout and would have received scholarship offers if he wasn't such a highly-touted football prospect.

The Cal offer is intriguing because not only is that where his father, Richard, went, but the school is open to the idea of Rodgers trying to walk on to the basketball team as well [7].

Welcome to Cal Richard!  We look forward to seeing you becoming the next Tony Gonzalez!