TwistNHook:  Well, here we have come.  The final position roundtable of the year.  Quarterback.  Kevin Riley.  How can he do?

Here are his career numbers:

Can he improve on that 54.7 completion percentage?  Cal will need him to if there is a hope for greater success this year.

LeonPowe:  F it. I'm committing. If tedford is this fired up about Kevin then so am I. Talent was never a question with Riley - it was consistency and commitment. College students mature. Riley has been playing in the cal system for years. I say he puts it together this year.

Of course, this means that Riley is going to be undeniably brilliant this year but then get injured.

HydroTech:  I still have hope in Riley that he can have a breakout senior season.  I wouldn't be totally surprised if he managed to have some numbers around a 60% completion rate, and a 5:2 TD-INT ratio.

CALumbusBear:  I'm drowning in kool-aid as I write this!  I think Riley will have his best year.  Maybe not a JJ Arrington-like explosion (where he's the best in the country, yet is still shockingly overlooked by everyone), but a good Boller-like improvement where he becomes a much more solid QB.

OhioBear:   For some reason, when I think of Kevin Riley this year, I think of this chorus to a Bon Jovi song:

"It's my life...it's now or never....
"I ain't gonna live forever.  I just wanna live while I'm alive.
"My heart is like an open highway.
"Like Frankie said, I did it my way...
"I just want to live while I'm alive.
"It's.  My.  Life."
It's now or never for Kevin Riley to realize the potential that we saw back in 2007.  We have seen lots of good things from him in his career.  Beyond some of his finer performances, we have seen Riley's passion for the game, for his team, and for Cal.  What we have not seen is consistency.  Is this year that consistency and accuracy prevail?  Well, call me a kool-aid drinking sunshine pumper because I think Riley will put it together this year and have a good season at quarterback.

Riley is a senior, has experience, and knows this offense.  From Coach Tedford's comments, it seems that Riley has worked harder than ever before and has determination heretofore unseen.  (And we must believe those comments because we are Tedford Sunshine Pumpers!)  And from comments I've read from Riley himself, he seems to have a sense of urgency.  He realizes this is his last shot at being Cal's quarterback and that he has something to prove.  A Kyle Boller 2002 transformation is not out of the question.

Can he improve on that 54.7 completion percentage?

But, the song for me that comes to mind is the big scene from "Dumbo:"

Kevin Riley needs to find his magic feather.  When he's confident, he can fly.  When he's doubting himself or worried...splat.

The key to this year is going to be his jersey.  If it stays clean, he's going to complete >60% of his passes and we'll be competitive.  If someone else can emerge as a legitimate threat opposite Jones, we might be able execute max-protect schemes as needed with some hope of success.  Or, perhaps the game slows down for him and he's able to make the necessary reads to beat pressure.  I'm heartened by reports of improved footwork and mechanics.  I hope he doesn't revert to bad habits when stressed out.  Because Riley seems to be a guy that needs to get grooved, Ludwig could help him out by calling a few of his stronger patterns/throws early in the game.  (Miller down the seam)

Picture me doing the Happy Gilmore hose dance around the room with the sunshine pump - I think he's going to have a great year.

But, lest we anger the mighty Juju, keep in mind that we're one injury away from being seriously screwed.  Our backups have not taken any meaningful snaps.  We know little to nothing about them aside from scattered reports that Sweeney is "scrappy" and Mansion couldn't hit the ocean from his Party Yacht.  My guess is that Sweeney fits the Reggie Robertson mold of future caretaker.  Okay arm, decent mobility, knows the offense, but lacks the star potential of Hinder or Bridgford. (Both reportedly lights-out accurate in camp.)  Poor Mansion has slipped to the point where he may get beaten out by cougar-bait Wertenberger. (local walk-on)  I really hope that the backups get some snaps in the earlier part of the year - both for experience and to help sort out the pecking order for next year.  Forgive me, blessed Tedford, but I would ask that you put aside your normal tendency to have the backups exclusively hand off and let them try running the actual offense.

NorCalNick:  I really don't know what to expect out of Riley this year.  You've got the things working in his favor:

-Senior QB with lots of experience.
-Effusive praise from Tedford.
-Has shown the ability to perform at a high level in the past.
-Potentially lots of talent at WR.
-An excellent tight end option.

And the things that concern me:

-After Marvin Jones, very limited experience at WR.
-Question marks on the offensive line.
-Can we expect the inconsistencies from the last two years to disappear?

I really thought that Riley turned a corner during the Big Game.  The way he and Vereen controlled the ball and won the game for Cal was so impressive.  But that was followed up with 14-32 at Washington and 20-36 with two INTs against Utah.  So I guess the jury is still out. 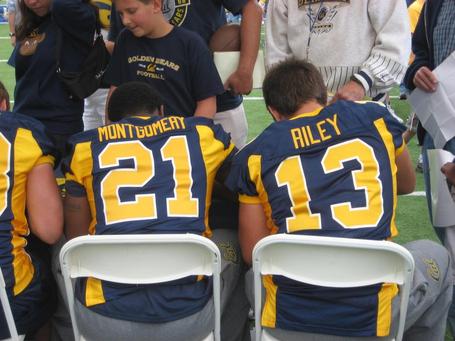 TwistNHook:  As Cal fans, it is our hallowed duty to fear the worst.  If Riley has an injury and goes down, what do we think of the backups?

HydroTech:  Who will our #2 QB be?  Well, towards the end of last season, Sweeney took over the #2 spot from Mansion.  Unless things change dramatically, it'd probably be safe to assume that Sweeney will still be the #2 QB.

The fact that Sweeney took over the #2 spot from Mansion, despite Mansion being one year senior, speaks positively about Sweeney.  The kid must be pretty decent, right?

I remember from the 2009 Spring game, I felt as if Sweeney was the best QB out of Riley, Mansion, and Sweeney.  I wrote:

First off, let me say that I thought Sweeney looked like the best QB today.  Note that I am saying the "best."  I'm not saying he did "great" today, but merely that he was the best out of Riley, Mansion and him.  Overall, I would describe his performance as "good."   He was decisive.  He got the ball out on-time and was rarely, if ever, caught looking too long down the field.  He seemed to have that "internal timer" of aware QBs who know when to run when the pocket is breaking down and/or nobody is open.  Sweeney consistently eluded defenders, escaped collapsing pockets, and even scrambled for (positive) yards.

Someone on Twitter asked us during the practice whether Sweeney had good zip on his ball.  It appears as he does.  I do remember a few plays in particular where Sweeney threw some absolute bullets at WRs.  Also, Sweeney threw a beautiful 40+ yard deep bomb touchdown to Ross.  The offense was driving north.  Ross was on the east side of the field.  Sweeney recognized man-coverage on Ross and no safety help.  Sweeney dropped back, and threw a perfectly placed ball into the back north-east corner of the endzone where Ross caught it after using his speed to put about 4 yards of separation between him and his defender.

Sweeney also had a great little ad lib shovel pass on a scramble.  On one particular passing play the pocket broke down.  So Sweeney escaped to his left, was about to run but then saw he was getting cut off by approaching defenders.  Having not passed the line of scrimmage yet, Sweeney shoveled the ball back to his right towards the interior of the field and across the line of scrimmage to an open receiver for a small gain.  Although it was a small gain, this play showed Sweeney's pocket presence (ability to feel when the pocket was breaking down), his escapability (his ability to escape a collapsing pocket), his vision (for seeing the open receiver), and his ability to ad lib.

I took a lot of crap for writing that stuff because statistically, Sweeney had the worst day between him, Riley, and Mansion.  However, and forgive me if I toot my own horn a bit, perhaps I was onto something.

As I write this, the official 2010 two deep (depth chart) has yet to be published, but I wouldn't be totally surprised if Sweeney is still in that #2 QB spot after having taken it over last year. 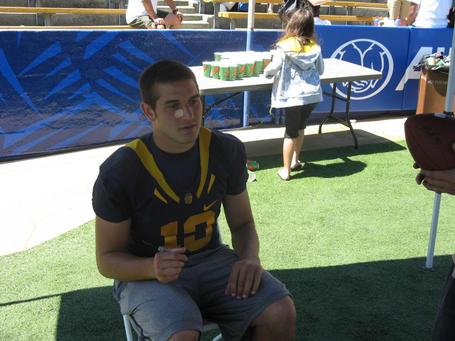 Avinash:  Sweeney is the #2 quarterback. Okanes confirmed it in his chat.

NorCalNick:  Well Beau has a sterling career record of 5-9 with 45 yards.  I think it's a safe bet that Cal fans would prefer not to see him until Cal is up by 25 points or so in the 2nd half.  Having said that, Hydro is right - Beau must be looking pretty good in practice for him to jump all the way up to 2nd string on a crowded depth chart.  If Riley stays healthy (knock on wood) it should be a hell of a quarterback competition in 2011!