TwistNHook:  Well, it is Vereen's team now.  How will he be able to handle the load by himself?  But, then again, he won't be 100% by himself as he is backed up by an array of impressive backs, such as Isi Sofele!

And we know how hardcore Vereen is.  From an alumni event earlier this year running back coach noted that Shane Vereen played through intense pain:

Avinash:  The question isn't how well Vereen can handle the load (we've seen that he can). It's will someone be able to spell him and turn Cal's running game back from good to great?

The Bears have had their best running seasons in pairs, and if we expect to see that type of success this season, someone's going to have to step up and be a consistent #2 option. It seems like it'll be Sofele (who Tedford has taken a liking to since he arrived at Cal), but can he shoulder a significant degree of the carries and contribute outside of fly sweeps in the Wildbear?

How confident are you in Sofele's ability to be the #2 back?

NorCalNick:  I'm reasonably confident in Sofele's ability as a #2, and I'm even more confident in Tedford, Gould and Co's ability to find somebody to be productive as the #2 back.  The Tedford era has never seen a year without a successful combo, even in years when the backups were relatively unknown quantities, a la JJ Arrington in 2003, or even Shane Vereen when he arrived on campus.

It's nice having a position that you know you never have to worry about.  In Gould we trust!

OhioBear: Running back is, by far, the position on this team that I am least worried about.  Thinking back on the Tedford era, you might be able to say that about a lot of years.  We have been blessed with great running back corps, and credit for that must go to the coaching staff, especially Coach Tedford and Coach Gould.  (But then again, what do I know?  I am just a Tedford Sunshine Pumper!) 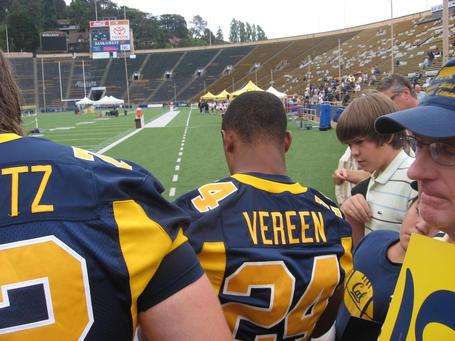 I have a tremendous amount of confidence in Shane Vereen.  I'm not going to tell you he is as good or better than Jahvid Best, Marshawn Lynch, or J.J. Arrington.  But I do believe he is a very good college running back.  He runs with passion and power and, as he has shown time and again, he has the speed to outrun you to the end zone.  Assuming he can stay healthy, he will be a solid performer for this team and will be a 1,000+ yard rusher.
Vereen already has folk hero status for his epic 42 carry, 193 yard, 3 TD performance in last year's Big Game.  I, for one, will forever think of that game any time Shane Vereen's name is mentioned.  But beyond Big Game 2009, Vereen may have another prominent place in Cal football history.  Again assuming he stays healthy, Vereen should be well on his way to becoming Cal's all time leading rusher.
Another constant throughout the Tedford era, for the most part, has been a solid "Number Two" running back who has maximized his chances and elevated our running game to even greater heights.  That could be a question mark this year, as our candidates for "Number Two" have limited experience.  But I am not too terribly worried about that.  In his limited opportunities last year, I was quite impressed with Covaughn DeBoskie-Johnson.  I thought DeBo was a good slashing runner who showed an ability to hit the hole quickly.  And he is athletic enough to make guys miss.
As much as I am impressed by DeBoskie-Johnson, it makes me all the more intrigued by the fact that Isi Sofele, and perhaps Dasarte Yarnway also, have the edge over DeBoskie-Johnson for the carries as "Number Two."  Part of me is disappointed at that development because I like DeBoskie-Johnson.  But it also makes me optimistic to see just how good Sofele and/or Yarnway have become. 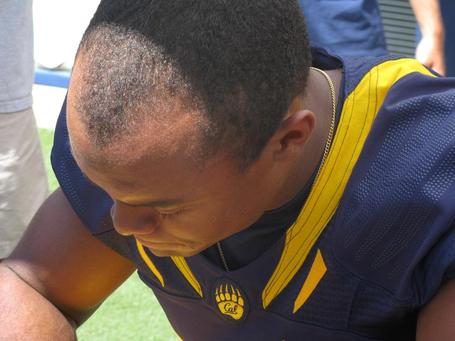 Kodiak:  Saddle up, boys.  We've got plenty of horses here.  If he stays healthy, Vereen is going to have an absolutely monster year.  He's a patient runner with good vision, balance, and speed.  Although he won't blow you away with his raw power, he shows plenty of heart and determination.  He's also a reliable receiving threat...not so sure if they're still going to let him throw it ever again.  About the only area which could use significant improvement would be in blitz pick-up.  Although his style isn't overly flashy - he provides a steady diet of singles and doubles with the occasional home run.  Not to jinx anything, but he also tends to take good care of the ball.

Plenty of options to choose from for the back-up.  In fact, there's more depth here than in recent memory.  Isi sounds like he's dynamic in the open field.  Yarnway is a bruiser.  Debo is crafty between the tackles.  It could come down to who provides the most consistent pass protection and who takes care of the ball.

Or, we might see all of them getting time depending on down and distance.  I know they've been looking hard at Yarnway for short yardage scenarios.  It seems that we've struggled for years with punching it in at the goal line or in 3rd/4th and short.  Although I prefer to stay balanced and not telegraph our playcalls by personnel, it is appealing to think about a Bear version of the We-Don't-Care-If-You-Know-It's-Coming Jumbo package.

OhioBear:  Another thing to remember about Vereen -- he is an excellent pass receiver.  When he does not have to stay in for pass protection, he is a threat in the passing game coming out of the backfield.  And Cal has also used him effectively when splitting him out as a wide receiver (e.g., Big Game 2008).

Kodiak:  Considering Vereen's versatility, I like the idea of him + Isi or Yarnway in the backfield at the same time.  If either Vereen or Yarnway can block effectively, a Vereen/Yarnway combo poses a nice short yardage package where you couldn't be sure whether we're going to run wide, shove it up the middle, or go play-action pass.

Isi/Vereen would be your mis-direction package.  'Course, for this to work, we might actually have to hand the ball to Isi more than once per year. 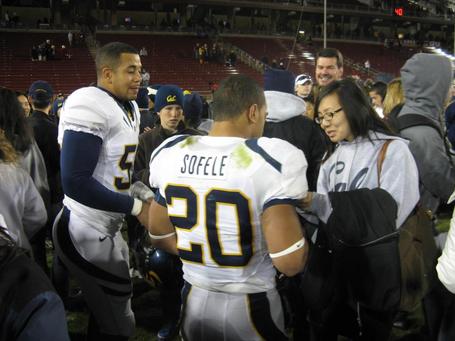 OhioBear:  As far as ball security goes, can anyone remember the last time Vereen lost a fumble?  I'm thinking it was the 2008 Oregon game in the rain.  Has there been one since?

Kodiak:  Oh good job.  The next time he loses one, it's officially your fault.

TwistNHook:  Well, thanks to the intrepid reporting of reader turkey, we know now that Isi Sofele is the backup to Vereen.  Any thoughts on this?

LeonPowe:  While I fall wholly into "trust in tedford and Gould" camp as well as "I'll have some of that flavor aid＂camp, I only have a slight reservation about isi in that he isn't really as fast as we've been spoiled with with our running back stable has been.

TwistNHook:  Who do you think should be the backup, then?

LeonPowe:  I still trust in Gould/tedford to make the right personnel decisions (longshore-gate aside) so I'll wait and see. Failing that how about marshawn lynch in a Karl dorrell mustache?

Kodiak:  Marshawn doing an Old Spice Man routine with a Karl Dorrell 'stache...then flashing his grill...and ending by ghostriding a golf cart would be awesome.

NorCalNick:  I think having Isi as the backup and presumably on the field more could really add some excitement to the wildcat/wildbear/crazy formation.  There was some discussion in the past that defenses didn't really respect the wildcat because they knew that Vereen would keep the ball and run up the middle.  Perhaps with Isi getting a larger role in the offense more options will be available on those plays.  I've always felt that Cal has had very successful plays when they get both of their top two running backs out on the field at the same time, so I'm excited to think about what they can do together in the wildcat.

Kodiak:  Well, the tough thing about evaluating any of the backups is that we haven't really seen any of them in prolonged action.  Debo did very well with limited carries last year.  I hear reports of how incredible Isi is in practice...just haven't seen it yet in person.  Likewise, the rumors were that Yarnway was looking strong last year until hurting his foot.

I thought Isi was supposed to be a speedster, too...just not Jahvid-esque.  Considering that our last RB's have been Best, Vereen, Forsett, Lynch, Arrington, Echemandu, Igber...Best is the only guy with otherworldly speed.  Vereen is probably #2 in terms of being a proven home-run threat.  But, Isi was timed at 4.42 in HS which is the same as Quizz and LaMike.

Oregon seemed to do okay with their speed + speed combo of LaMike and Barner last year.  I don't have a problem with putting more game-breakers on the field.  I suppose you could quibble over short yardage situations or being able to drag the pile.  But short isn't the same thing as small.  Isi apparently worked very hard last year to add muscle - I'm excited to see him get a chance to show what he can do.

OhioBear: I am surprised that Sofele emerged as Vereen's backup.  I expected Deboskie-Johnson to be the next in line, especially after I liked what I saw of him in his limited carries last year.

Much will be made of Sofele's size and whether he is big enough to compete at the running back spot.  I'm not that concerned with that at this time.  As Vereen's backup, he is not an "every down" back right now.  And Sofele's running style makes him a nice change-of-pace back, hopefully keeping defenses off balance.  Even though Vereen has speed, he also runs well between the tackles.  I see Sofele as more of the "scatback" type who can be a real asset in the Wildbear or in the screen passing game.