Our Southern California brethren has enjoyed much more hype in terms of sunshine and prep football. De La Salle (Concord, CA) might have started a sea of change in 2009, defeating Crenshaw (Los Angeles, CA) for the CIF State Championship Bowl.  Tonight, the 2010 edition of Friday Night Lights kicks off in Northern California with one of the most anticipated match-ups in recent memory - Grant Union (Sacramento, CA) at Folsom (Folsom, CA).

There are several Cal recruits in action tonight, check them out after the jump!

It's one proud, close and rugged inner-city community from the toughest unpaved streets of Del Paso Heights, traveling to the also proud and tight, but upscale, la-tee-dah smooth suburban sidewalks and neighborhood of Folsom.

The game, the buildup and the setting have Del Paso Heights and Folsom buzzing, from barber shops to coffee shops to the campus hallways.

"I think we're all ready to play the game now," Grant coach Mike Alberghini said. "It's how everyone handles the hype now, if kids are going to try to be more than what they are."

"I've been covering this region for 23 years and there's no doubt this is the biggest, most hyped, most anticipated regular-season game ever in this region," Sacramento Bee sports writer Joe Davidson said. "It's off the charts." 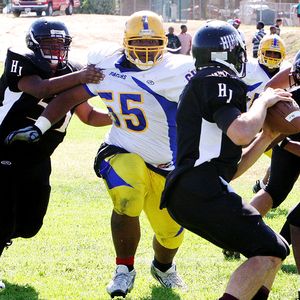 Viliami Moala is a beast of a player at defensive tackle. At 6-foot-1, 325 pounds he could be considered the immovable object. Moala sits low to the ground and is so strong he will push most offensive linemen back into the pocket. He recorded 15 sacks in his junior season and interest for Moala is coast-to-coast with every school in the Pac-10 offering and even SEC powers Florida and Alabama showing great interest. 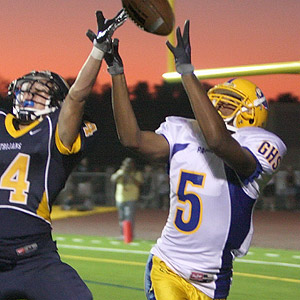 Defensive back Shaq Thompson (6-0, 185 pounds) already has verbal offers from California and UNLV with more expected once Sept. 1 rolls around. Thompson fits very well in a defense that prides itself on speed, power and physical presence. He’s going to be one of California’s top defensive backs in the Class of 2012.

Joining Thompson in that tough Grant secondary is senior James Sample (6-1, 195 pounds). As a safety at the next level, Thompson is probably going to be around 215 to 220 pounds to give opposing wide receivers the look of an outside linebacker. There’s a ton of interest in Sample and offers from Arizona, Arizona State, Utah, Cal, Washington and Oregon.

Other recruits to watch: