In case you missed the previous posts in this series, you may find them here: Part I: The DL Zone Read.

While watching the game, I did come across one lone bright spot: the Cal defense holding Oregon's offense from scoring a touchdown.  Let's check out what happened. 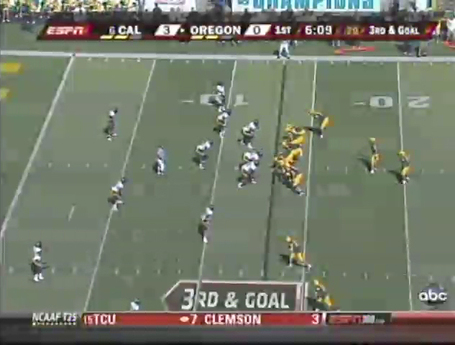 Above is the pre-snap picture.  It's the first quarter, and the score is Cal 3-0.  Oregon is facing a 3rd and goal from the 13 yard line. 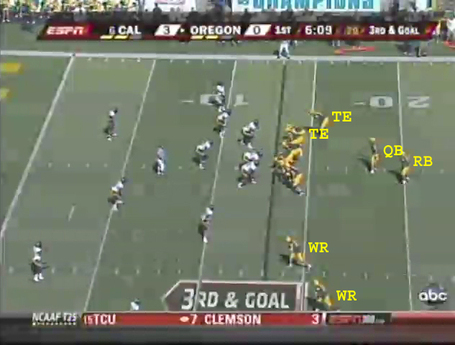 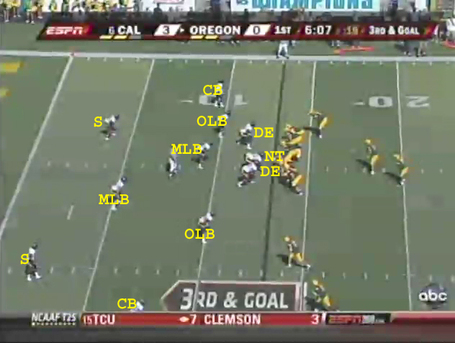 Cal counters with its 3-4 base defense.  For those of you who know your football, I'm sure something jumps out to you in the picture above.  We'll get to that later. 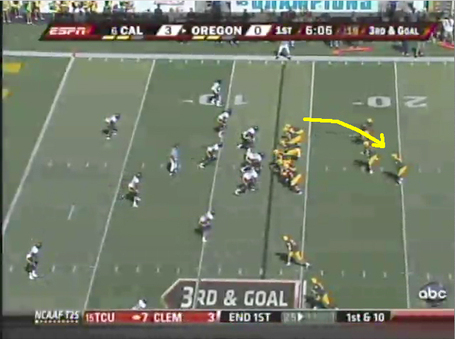 Just before the snap, one of Oregon's tight ends (TE) whips around into the backfield!  Oh noes!  What's going on?! 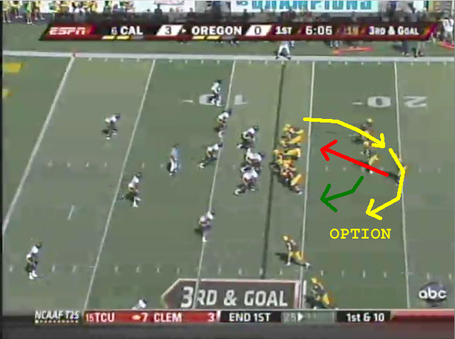 I'll tell you what's going on.  This is a triple option play!  The QB has the option of either handing the ball off to the RB by reading the Cal defensive end (represented by the red arrow), either keeping the ball himself and running (green arrow), or pitching the ball to his pitch man the TE (the yellow arrow). 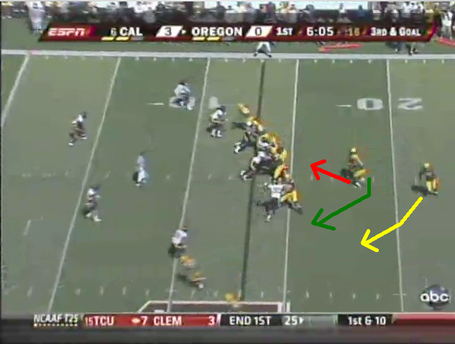 And as you can see, as the QB and the RB mesh, the triple option becomes more obvious. 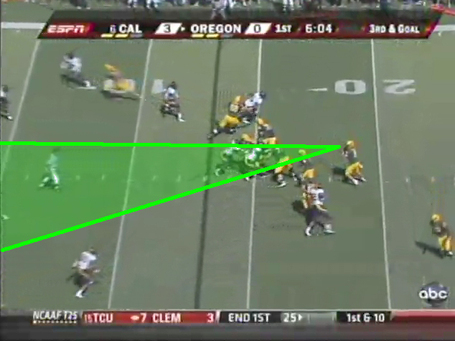 But what's this?!  Masoli doesn't hand the ball off!  Nor is he running with the ball!  Instead, he's pulled up the ball and is preparing to throw!  This isn't a triple option!  It's a passing play!  By the way, we know it's a *designed* passing play based on the blocking technique of the offensive line. 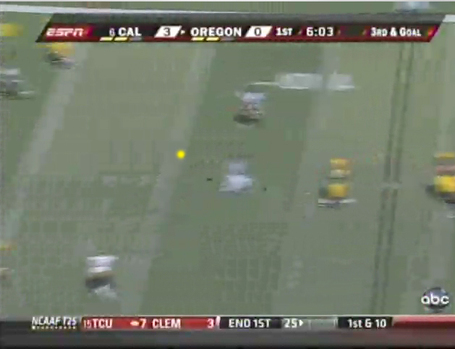 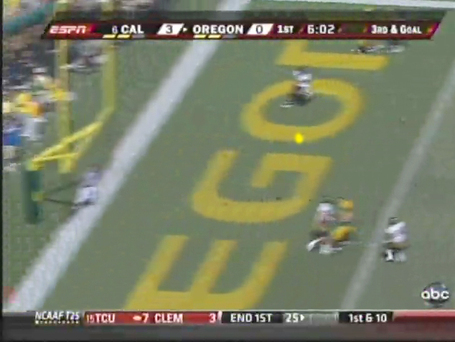 But the pass is high!  Also, a Cal defender is on the scene to lay some wood on the Oregon WR and probably would have broken up the play regardless.

Okay, I'm sure the coolness of this play is probably lost on many of you so let's dive into things a little deeper.  Do you see what this offensive play was designed to do? 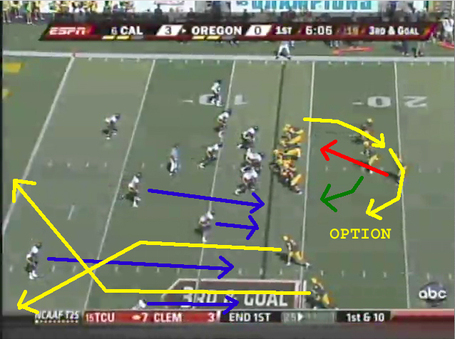 The play, based on the pre-snap motion, looks like a triple option run play.  The fake triple option essentially serves as a "double play action."  The play is designed to get the defense to bite on the hand off to the runningback, and if not that, then have the defense bite down on the fake option.  The offense is specifically targeting the defenders directly opposite to the WRs by running the option at those players.  That would be the cornerback (CB), outside linebacker (OLB), middle linebacker (MLB) and safety (S).  The offense is hoping that those four defenders bite on the fake-option (represented by the blue arrows), so that the WRs may run their routes (yellow arrows) right by the deceived defenders! 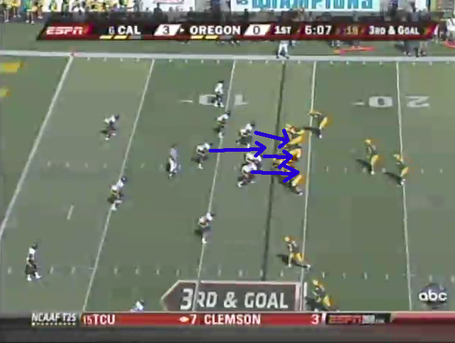 The defense sends three four defenders on pass rush towards the QB! 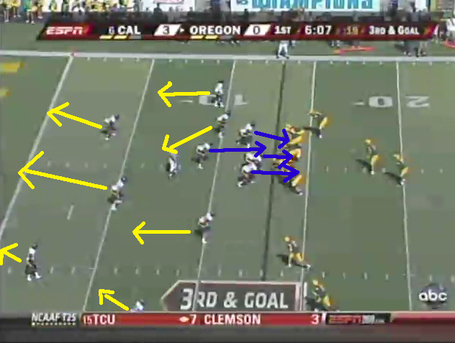 As for the coverage, the defense drops a total of seven defenders into coverage. 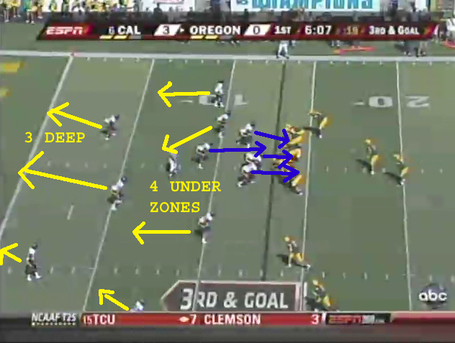 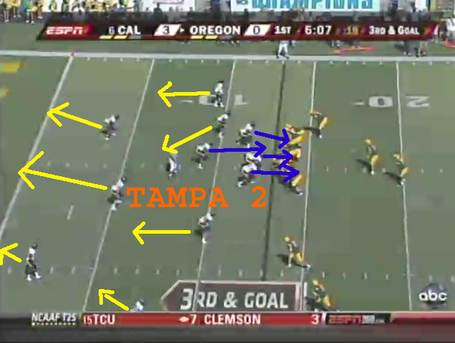 What do we have here????  We have a Tampa 2 defense!  A Tampa 2 defense is a defense that is fairly similar to the Cover 2.  Instead though, it drops the MLB into deep center to play the middle third of the field, essentially putting the defense into a Cover 3.  In other words, the tampa 2 defense is a sort of cover 3.  The defense also usually plays four underneath zones.

The strategy and rationale for dropping the MLB into the deep 1/3rd of the field allows the safeties (who are playing the outside 1/3rds of the deep zone) to play more aggressively against WR routes along the sidelines and past the CBs -- the traditional vulnerability of a Cover 2 defense. 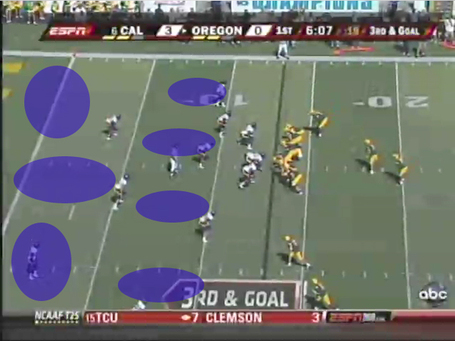 Here is a better picture of the Tampa 2 defense which I've represented by blue ovals representing the different zones.

Earlier in this post I mentioned that something should have stood out from the above picture.  Remember that?  Well, hopefully, all you really intelligent Cal fans out there who know your football should have immediately said: TAMPA 2!

Yes!  If you did, great!  You really do know your stuff.

The clue here is the MLB playing really deep pre-snap.  That's what you should have seen, and what should have triggered you to say TAMPA 2!  That MLB is playing too deep for a normal 3-4.  Also note that the safety to the bottom left corner of the screen is playing a bit too wide.  In fact, he's playing the outside shoulder of the slot WR.  That is another hint.  That safety is playing wide, and giving up the area towards the middle of the field, because he knows he has help to the middle from the MLB.  All that together should scream TAMPA 2 to you! 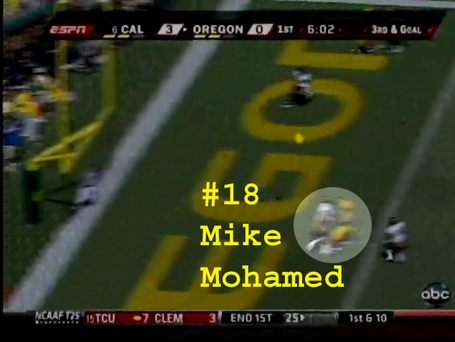 And it's the Tampa 2 defense that successfully defends against this offensive play.  Who is that in the endzone breaking up the pass play???  None other than Mikey Mo!

There he is playing that deep center 1/3rd of the field.

If you watch the video replay of this play (at about 6:05 in the 1st quarter), you'll see that not a single Cal defender really bites on the fakes.  This is great situational awareness.  Remember, the offense was facing a 3rd and Goal from the 13 yard line.  It's highly doubtful that the offense would run the ball.  Therefore, despite the fake triple option run look by the offense, the defense still drops back into their zones to prevent the touchdown.

This is a great defensive play that was executed well by the Cal players on the field; a lone bright spot in a hot mess of a slaughter.