TwistNHook:  Matt Summers-Gavin.  Last year, he seemed to be the key to the entire offense.  When he was in there, it seemed like Cal's offense could dominate and when he was gone, not so much.  Can he stay healthy this year and what other players should we be looking out for to sparkle on the offensive line?

NorCalNick:  2009 was the first year I can remember under Tedford when the offensive line wasn't consistently excellent. There are a number of potential reasons why - losing an elite talent like Alex Mack plus breaking in a new line coach and offensive coordinator sounds like a recipe for trouble.  Add in a few injuries and perhaps it's not shocking that Cal had 5 games with 200+ yards on the ground and 6 games with less than 100.

So with a little good health (knock on wood) I'm optimistic that four returning starters and a stable returning coaching staff will see Cal return to the above-average line play that's been a hallmark of the Tedford offense.

Kodiak:  Sounds like it's going to be Schwartz at LT, MSG at LG, Guarnero at C, Cheadle/Schwenke at RG, and Edwards at RT.  Rotating in are Fisher, Galas, Demartinis, and Brazinski.

I suppose last year's struggles and inconsistencies can be chalked up to injuries and a lack of experienced/talented depth.  That won't fly this year.  It's the 2nd year with the same O-line coach, your top seven guys all have playing experience, and those touted youngsters have had another year to blueshirt and develop.  Some people have mentioned there was more of an emphasis on scheme last year as opposed to this year's focus on technique.  I know some of the guys played hurt.  Whenever MSG went out, there was a domino effect on the rotation that made everyone else less effective.

We were spoiled for years with Coach Michalchik seemingly working miracles with unheralded recruits...maybe last year was when the luck would have run out anyway due to recruiting misses, inopportune injuries, or just being young.

In any case, the guys have got to gel this year if we're going to have any hope of being competitive with our better opponents.  It won't matter how talented our backs are, or how improved Riley is if the line falters again.  I'm not sold on Marshall yet.  I'd love for him to put my doubts to rest.

Avinash:  I think people underestimate how hard it is to transition from one O-line coach to the next. Hydro mentioned Marshall is a guy who emphasizes scheme over technique, and because it takes at least a year for an O-line to adjust to a new playbook, our team always had periods were it looked completely discombobulated on the field. Especially against units that decided to test it by sending blitzes from multiple angles, or rushed the linebacker a little bit earlier than expected, or were able to read the O-line based on their early movements off the snap

From 2002 to 2007 we primarily power blocked. We were so good at it we didn't need anything else. When our team started to struggle more and more to get the run going against good teams in 2006-2007, we began implementing more zone blocking. We ran a lot of outside zone with Alex Mack, Norris Malele and Tad Smith and Will Ta'ufo'ou helping out, but there was still a lot of power mixed in there to get the offense humming--unfortunately our lack of passing game made things very difficult as we became one dimensional in our offensive attack.

In 2009 we were doing primarily zone blocking (inside zone iirc) a lot. That requires a lot of agility and speed off the snap, something we didn't seem to show much of last season. Summers-Gavin is young and agile (although despite people praising his name, he still had his ups and down). Schwartz was very physical and our best linemen last year. Tepper was ok--he just didn't have the footspeed after a year of injury to compete against younger faster defensive ends. Guarnero is undersized for a center (he's at best 30 pounds lighter than Mack at his peak) and will just have to work hard to compensate for that. Cheadle struggled a lot and was probably the weakest link on the starting line--that he's dropped to the second unit in fall practice is telling.

Putting Brian Schwenke, Donovan Edwards and Dominic Galas into the mix will be interesting. These guys have had more time to learn the system and are probably more adept to handle the schemes than most of our team was last year.

HydroTech:  I might be partly to blame for people thinking that the offensive line utilized a lot of inside zone blocking.  That's what I thought I was diagnosing last season.

However, I talked with Tedford during the off-season, and I asked him about our offensive line blocking schemes, and he mentioned that last year (2009) we ran outside zone "more than any other year."

Part of my mis-diagnosis was due to poor camera angles (TV feeds showing the plays from the sides, rather than the preferred endzone views), and also due to a schematic assumption that I was making which was incorrect.  Tedford set me straight. 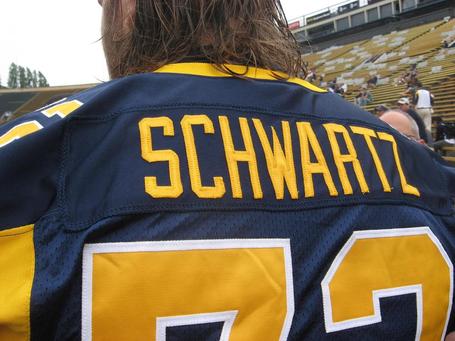 OhioBear: I miss the bygone days of not having to worry about O-line issues.  But as last year showed, those days are gone.  At least for now they are.  Offensive line, once an unquestioned strength of the Tedford era teams, is a question mark.

There are reasons to be optimistic.  We have a formidable left side of the line with our two best O-lineman holding down that side (Schwartz at LT and MSG at LG).  As MSG went, so did our offensive line play last year (maddeningly weird), so let's hope MSG can stay healthy for the full season.
Guarnero appears to be the starter at center, though I wonder if we'll see that change as we endeavor to put our best five offensive linemen on the field.  I guess the question becomes, is Guarnero a better right guard than Cheadle/Schwenke, so that we can move Galas to the center spot?  Or is Guarnero that much better at center than Galas that it's worth keeping him at the center position?  We'll see how that goes.
Tight end is sometimes overlooked when it comes to good offensive line play, and we were perhaps a little spoiled by having a great blocking tight end in Craig Stevens for so many years.  I'm not a film guru, but it seemed to me that Anthony Miller was a decent-to-good run blocking tight end last year.
But I suppose run blocking is not our biggest issue.  We had good running game numbers last year even with an O-line we generally considered suspect.  Our bugaboo was pass blocking and giving Riley time to actually finish his drop, plant his back foot, and look down the field.  When he did that, we were good; when he was pressured from the getgo, we were not.

Speaking of left guard, coach Jeff Tedford said Matt Summers-Gavin (knee bruise) is progressing. He has shed his crutches and is walking around fine.

People were incredibly concerned when Summers-Gavin went down earlier this summer.  This news is good for all Cal fans.  Hopefully, he can continue to progress!

I think Donovan Edwards is another key player on this offensive line.  Tedford has stated that he can play multiple positions: 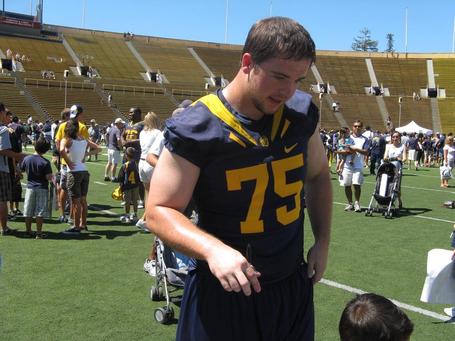 Tedford said. "Donovan Edwards has actually really created some flexibility for us. He played center in the spring, he played tackle. We can move other people around."

Right now, I think he is slated to start at tackle, but he can move over to Guard is Summers-Gavin goes down.  He can even play center, apparently.  So, it is a situation where he could help Cal deal with some injury problems, if there are any.  Hopefully, there won't be!