I'm back.  Where have I been?  Attempting to make something of my life.  Now I'm a bum again, and should have more time to write stuff.  Hopefully.  In deciding what to write about, I was inspired by reading Avinash's post comparing Pendergast to Gregory.  Of course, any talk about Gregory wouldn't be complete without including the words "soft zones," "3 man rush," "bend but don't break," " passive," "idiot," "jackass," "dumb-ass," or "stupid fucker." I mean seriously, reading some of the stuff people say about the guy, you'd think he had an IQ of a rock.

So I decided, after a whopping 10 months since the Cal @ Oregon game, to flip on my tivo, and take a look at the game again.  But not until I had first drank a six pack of beer to numb myself.

What was I looking for?  Anything.  I just looked at Oregon's offense versus Cal's defense.  I wanted to know what was going on, other than "Dickson caught a lot of passes," Gregory doesn't "cover the tight end," and Cal just plays a ton of "soft zones."

The subject of this post is Oregon's zone read of the defense tackle instead of the defensive end.  This isn't a huge deal.  But before you just ignore my upcoming essay after the jump, I urge you to stick with it, because this might be mildly interesting.  So here we go...

As you all probably know, when an offense executes a zone read, they typically read the defensive end. If you have no clue what I'm talking about, here's an old post of mine demonstrating Cal running the zone read against Tennessee.

I've heard Oregon will sometimes read the defensive tackle (DT) or nose tackle (NT) instead.  So when I started re-watching the game, it was something I looked out for.  And what do you know, in the first quarter of the game only, Oregon ran this play at us.  Here it is. 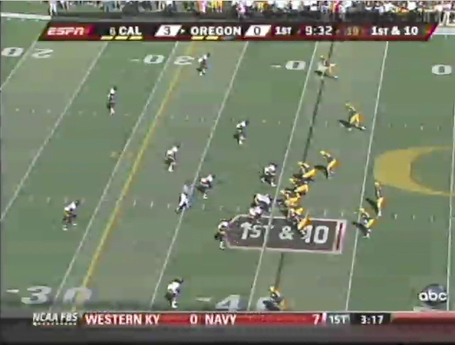 Above is the pre-snap formation. 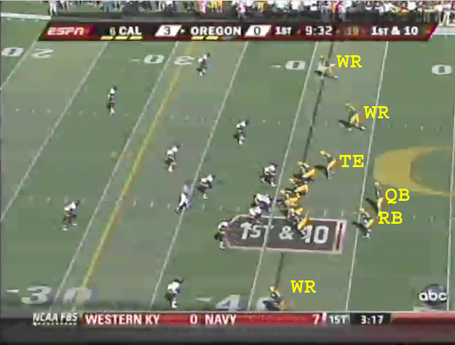 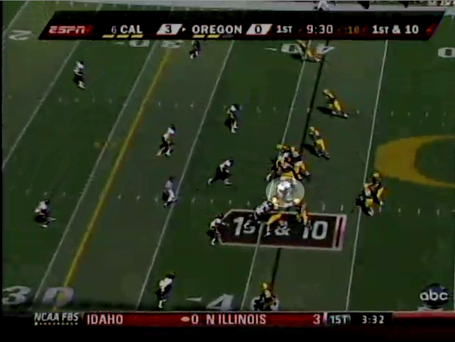 Here's the post-snap picture.  Note that the Oregon offensive line has parted ways faster than Reggie Bush and U$C, and they have left unblocked Cal's nose tackle (NT). 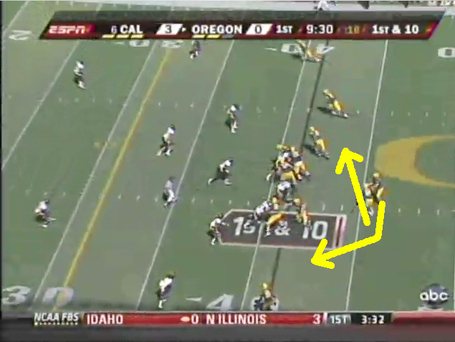 Oregon is running a zone read.  The QB will either hand off the ball to the RB should the unblocked defense -- the NT -- pursue the QB, or keep the ball and run in the other direction should the NT pursue the RB. 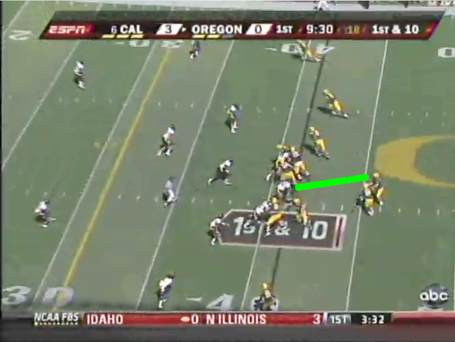 Oregon's QB, Masoli, reads the DT (represented by the green line).  Cal's NT, freezes, and doesn't bite on either the RB or the QB.  I'll talk more about this later, but that's the right thing to do. 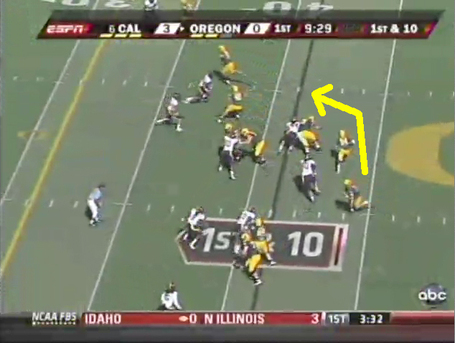 Oregon's QB then decides to hand off the ball to the RB.  Cal's defense stops the RB for little gain.  That's cool, but not that interesting. 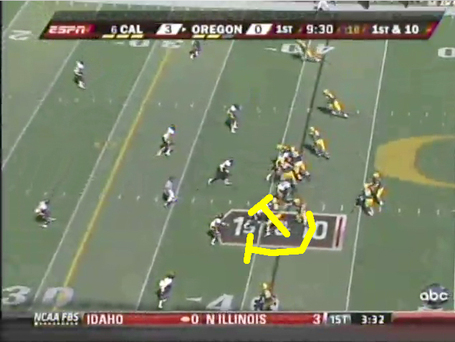 What is interesting is this.  It appears as if Oregon's offensive line is utilizing both a man blocking scheme, as well as zone blocking scheme.  On the backside, the side to which the run is *not* going (offense's left), the Oregon left guard (LG) and the left tackle (LT) will man block.  The LT will pin the defensive end (DE) inside, thus sealing off the defender from the outside should the QB have kept the ball and run to the offense's left, and the LG pulls around.  I've demonstrated this above. 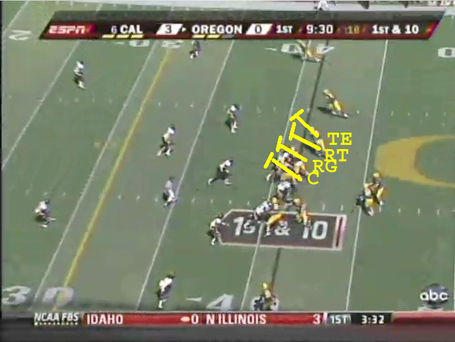 On the playside, the side to which the run is going, the offensive line is zone blocking.  The center (C), right guard (RG), right tackle (RT), and tight end (TE) flow to the right and block any defenders in their zones to their direction.  Hey now, that's pretty cool. 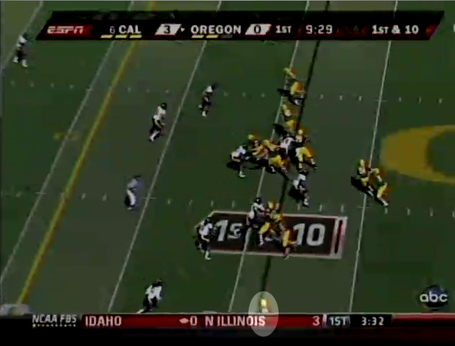 What's also pretty cool is this.  The Oregon WR to the bottom of the screen is looking towards the QB.  What's he doing?!  Why isn't he blocking the Cal cornerback (CB)? 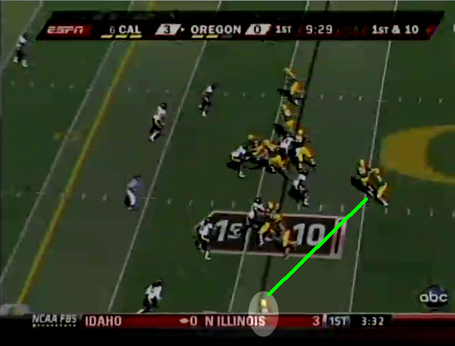 The idiot is watching the QB!  What is he doing??? 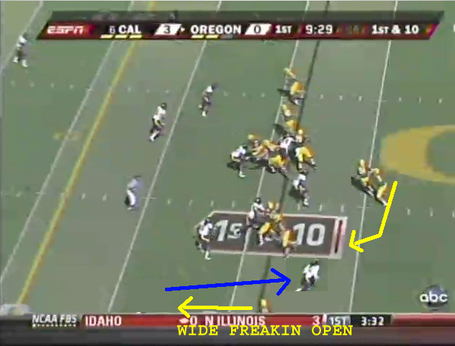 He's not an idiot.  What he is doing is by design and not out of laziness.  Let's just say the Cal CB jumps into the backfield in an attempt to stop the QB (assuming that the QB had kept the ball instead of handing it off to the RB).  Then that would leave the WR wide freakin' open, for an easy pass and easy gain.  Hey now, now that is pretty cool.

Furthermore, blocking the DE, and instead reading the DT or NT can surprise the defense, especially the DT or NT who gets read.  Typically, he's not used to being that guy that the offense reads and may not react properly to what's before him.  So how does one properly react to getting read in a zone read?

Well, if the defense is running a scrape-exchange to defend the zone read, then the defender getting read just pursues the RB threat, and a linebacker (LB) will swing around to the weakside and cover the QB should the QB decide to keep the ball.  Cal does not run a scrape-exchange.

If a defense isn't running a scrape-exchange, then the defender getting read merely just has to sit tight, wait to see what the QB does with the ball, then pursue the ball carrier (whomever it may be).

And we only have to watch THE VERY NEXT PLAY to get a great example of this. 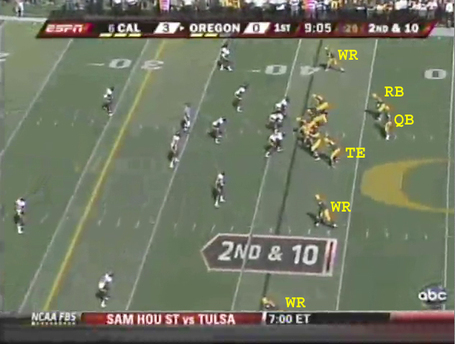 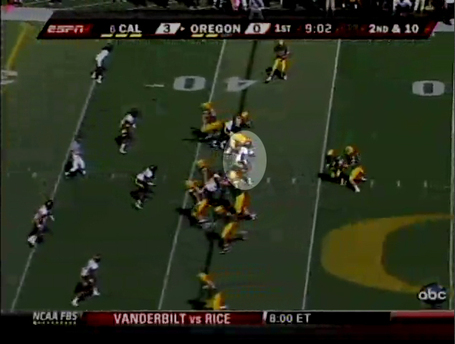 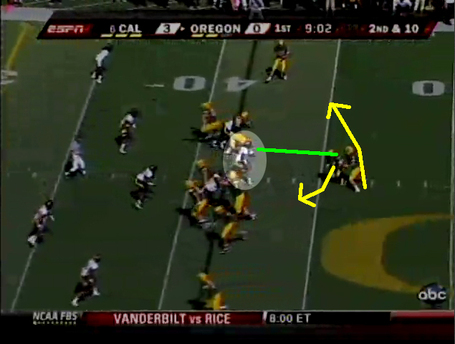 Again, the Oregon QB reads the NT to see whether to hand the ball off to the RB or keep it and run with it himself. 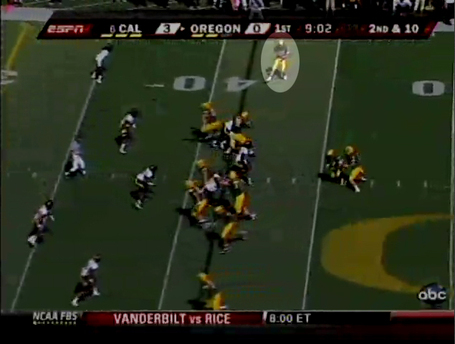 Again, note the Oregon WR to the backside turning towards the QB and looking for the ball just in case the CB doesn't cover him and instead jumps into the backfield to play run support. 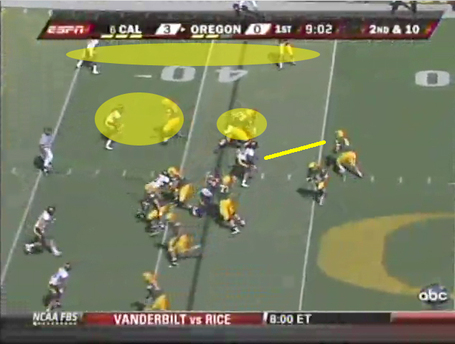 Now getting back to how to defend the zone read.  Like I said, if the defense is running a scrape-exchange, then the defender getting read should pursue the RB.  Cal doesn't do this.  So what the defender is supposed to do is just freeze, see what the QB does, then pursue the ball carrier.  That's exactly what the Cal defender in this play does.  He freezes.  Sees that the QB keeps the ball, then pursues the QB (yellow line).

I've put yellow ovals around the offensive and defensive players that are locked up in battle.  Thus, it is very important for the defender who is getting read, to NOT get faked and to pursue the offensive player who actually has the ball. 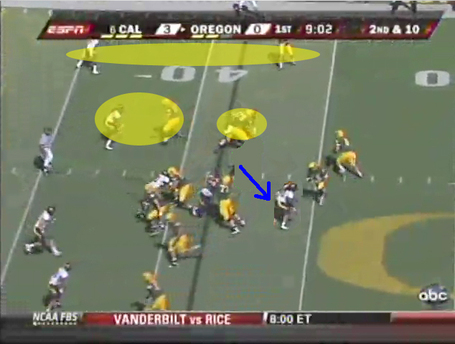 Because if the defender getting read gets faked out and pursues the offensive player who does not have the ball, like I've demonstrated above.  Then... 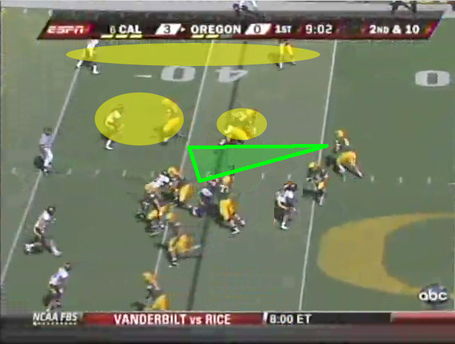 This happens.  A gigantic running lane appears for the QB to run through (green triangle).  Ya dig?

So Oregon ran basically the same play against us two plays in a row.  Actually, the second play was slightly different, in that the second play didn't involve a pulling offensive lineman (the RG in that instance).  It seems as if either the blocking scheme was different for the second play, or the determination whether the guard pulls or not is in response to where the defenders are lined up.  Nevertheless though, despite the minor differences in blocking schemes, it was the exact same play.  Twice in a row.

This is actually a theme that you'll see in the remaining posts of this series: Oregon offensive coordinator Mark Helfrich running the same play again ... and again.

Be sure to check back for more posts on this game.