But we lose Tyson Alualu?  Can the rest of the guys step up to make up his absence in the aggregate (this is the point at which you know you are at a Cal site)?

Avinash:  Well, a lot of it depends on whether a beastly but always injured Derrick Hill and an evolving Kendrick Payne can dominate the interior. Jordan will probably do his thing and demand double teams, but I think nose tackle is the key. Can Hill and Payne move from holding open to stuffing up the gaps, forcing linemen to double team them and make it tough for running backs to escape their backfield?

Also, a lot will be asked of Trevor Guyton. He had his moments last season, but he's a step down from 2009 Cameron Jordan. I can't see how the starting line doesn't fall off.

The depth will probably be better with Aaron Tipoti and Deandre Coleman as the backups, with Keni Kafusi likely to come on later this season. I think as is the case with many units on our team, we have more players with good talent, but the talent level on the starters has fallen a notch or two. It comes down that to the eternal college football question: Do you want more depth that's decently talented, or more talent with less depth to seal it off?

Thoughts on that last question guys?

NorCalNick:  With the way some of our interior linemen have stayed healthy over the years, I think I'd pick depth.  Hopefully one day we'll have the luxury of depth and talent at the same time.

What are the chances that Owusu contributes this year?  Everybody was so excited after his performances against Maryland - it's a shame the Terp offensive line was so misleadingly bad.

TwistNHook:  Yes, Guyton is a young guy who you have been hearing a lot about in the past years.  Now is his opportunity to really take off.  I remember meeting him at the 2008 Fan Appreciation Day when he was just a new recruit.  Looking at his high school accolades, you can see why there are high hopes for him:

HIGH SCHOOL: A SuperPrep All-America choice as a senior ... listed as a four-star recruit and the No. 18 defensive tackle in the country according to Scout ... also rated No. 43 among the nation's defensive tackles and the seventh-best prospect overall in the state of Washington by Rivals ... had 70 tackles, 14.0 tackles for loss, 6.0 sacks, four forced fumbles and four fumble recoveries as a senior in 2007 ... selected to play in the Offense-Defense All-American Bowl after his senior campaign ... finished his junior season with 80 tackles, 4.0 sacks, three forced fumbles and two fumble recoveries ... earned All-State, All-Area and All-KingCo Conference honors as a senior.

Avi's question was an interesting one.  I agree with NorCalNick that depth is key.  I'm concerned about the depth at LB, but feel like at DLine we have a goodly amount of depth.  Guyton is part of that depth.  Since Cal does seem to have bad luck with injuries, having a player like Guyton who can come in and hopefully contribute successfully will be key. 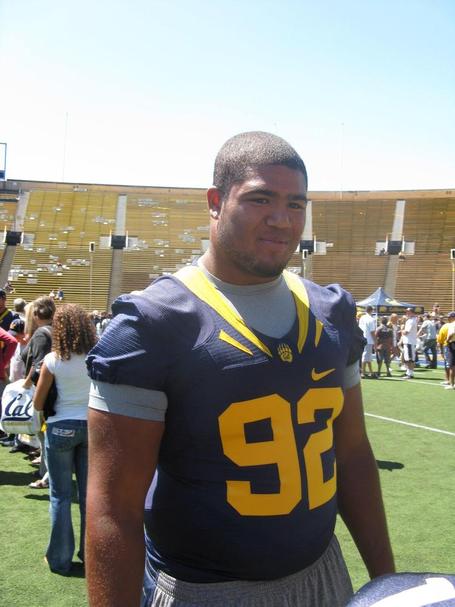 Solarise:  I'd expect some surprises from Coach Pendergast upfront to fulfill Coach Tedford's offseason promise to become more aggressive.  The Cal Defense should look quite different from the 3-4 we are accustomed to seeing from Coach Gregory.  From what I have observed during Spring Practice, Coach Pendergast is willing to stack five down linemen upfront if that is what it takes to put pressure on the quarterback.  Therefore, Cameron Jordan, Aaron Tipoti, Ernest Owusu, Trevor Guyton, Kendrick Payne, Deandre Coleman, and Derrick Hill should all get a chance to contribute.  Keni Kaufusi, who is recovering ahead of schedule from his shoulder injury, may not be out for the entire season.  Gabe King may also not blueshirt to provide more depth.

Cameron Jordan is unequivocally entrenched in his starting defense end spot.  There is high expectation for Jordan in his senior year to have a breakthrough season under Coach Pendergast's new aggressive scheme.  Kendrick Payne appears to have supplanted Derrick Hill to start at nose tackle.  I was looking for the physically-imposing Deandre Coleman to fill the other starting defense end spot opposite of Jordan, but he had a setback before camp to focus on academics.  Trevor Guyton or Ernest Owusu may be our opening day starter instead. 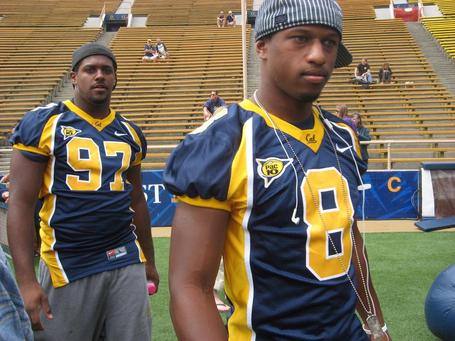 Kodiak:  I don't know enough about play in the trenches to say how well the Dline has performed the last few years.  It seems like they had the unglamorous job of occupying blockers while relying on the LB's to make the big plays.  That makes sense if you have a bunch of huge guys that can't move well...less so if you have guys that are more hybrid DE/DT types.  By reports, this year should be different with an emphasis on getting upfield and penetrating gaps instead of holding them.  (I really wish we could have seen King Tyce in this new scheme.)

It seems like we've heard about Jordan's size/strength/speed every year, but haven't seen that translate consistently on to the field.  Payne has overtaken the oft-injured Hill at NT.  Guyton is at the other end, but will likely platoon.  In fact, we have more quality depth on the line than in previous years.  Tipoti, Coleman, and Owusu will all get time.  True frosh King has had a really impressive camp, but may blueshirt to fully heal from his injured leg.

Pendergast has shown a willingness to switch to a 4-3 as needed depending on down/distance, and since we appear to have more experienced depth on the line instead of at LB, I suspect we might see more of this.

I worry a bit that we'll be more susceptible to screens and mis-direction. (as well as big plays) However, I like the philosophy of trying to dictate terms to the opposing offense and forcing them to react to you.  I'd have to think that potential recruits would also appreciate this change in attitude.
TwistNHook:  Yes, Kendrick Payne is somebody to keep an eye on.  Having met him at Fan Appreciation Day, he is a LARGE man.  He played in 12 games last year and was starting by the end of the year.

2009 (Game-By-Game Stats): Played in 12 games, including the first two starts of his career in the team's final two contests ... accounted for all of his career stats other than two games participated in by recording 13 tackles, 4.0 tackles for loss (-9 yards), 1.0 sack (-6 yards), one fumble recovery and one pass breakup ... had the biggest game of his career in the team's final contest of the season vs. Utah in the Poinsettia Bowl, collecting career-bests of three tackles, 2.0 tackles for loss (-6 yards) and his first career sack for a five-yard loss ... had two tackles on four other occasions vs. Eastern Washington, vs. Washington State (0.5 tackle for loss, -1 yard), at Arizona State (1.0 tackle for loss, -1 yard) and at Stanford (0.5 tackles for loss, -1 yard) ... fumble recovery came at Minnesota when he recovered a ball that had been knocked out by teammate Mychal Kendricks to stop a third-quarter Minnesota drive at the Cal 19-yard line, preserving a 21-14 lead for the Golden Bears ... recorded his first career pass breakup in the season opener vs. Maryland.

Avinash:  Payne split a lot of time with Hill in the Pointsettia Bowl and acquitted himself well. Lots of activity in the middle battling with his man. Unfortunately the pass defense struggled so much that his contributions were rendered irrelevant. 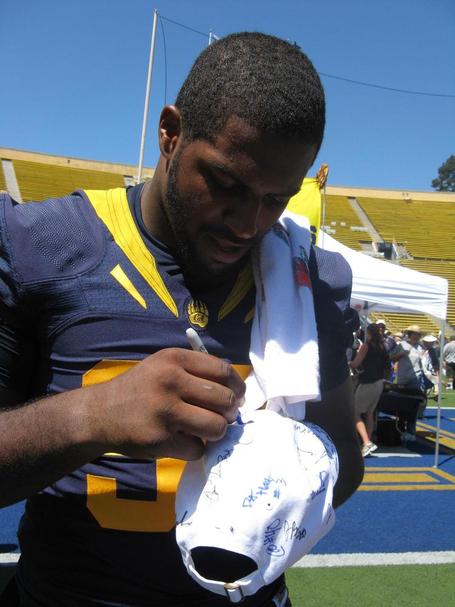 I do feel a more experienced Hill splitting time with Payne should lead to a very active unit in the middle. I'm not very concerned with our inside run defense this year.

I think a bigger question is whether Cameron Jordan can generate pressure off the edge. He's definitely a physical specimen, but does he have the activity to shed tackles and get to the quarterback?
NorCalNick:  With all of the news about true freshmen potentially competing for starting positions and with expectations to provide serious contributions, I haven't heard much about Gabe King.  It would be nice if Cal had so much depth that he could red shirt.  What are the chances that he breaks into the d line rotation?
Avinash:  Tedford has said King will get a chance to play.  But he's been recovering from injury for quite awhile and probably will not get up to game action to be a significant contributor this season. I'm really looking forward to seeing him down the road, but I expect we'll see him work his way into the lineup with the second unit and go from there
Let me put it this way--I think King will probably play this season. Remember, we wanted either him or Owa, and the only reason things got a little weaker with King was because that injury took forever to recover from (knee injuries are always tough to rehab for a DE). Once he returns to top speed (end of year would be great), I think he can really be a gamechanger back there. We'll see how good the other guys are in front of him.
Here's the tape of the new youngsters who could see action:

Here is some Gabe King video.
Tosh Lupoi mentioned at the Recruiting Event eons ago that King's meniscus is 100% (I think he said only one is gone), that he has all the physical tangibles (you can definitely see it in this tape), and also happens to be an incredible piano player.

Thoughts on their tapes? I'm guessing we're building up these guys for 2011.