Interview with the Mike Tepper

Share All sharing options for: Interview with the Mike Tepper

Mike Tepper is many things - tackle, guard, Dallas Cowboy, Golden Bear, good samaritan.  He is not a vampire, but there aren't any Tom Cruise movies titled "Interview with the 1st team all pac-10 left tackle," so this graphic will have to do.

Mike Tepper entered Cal in 2004.  My first memory of Tepper was at the LA coliseum during the 2004 Cal/sc game (yeah, that one).  Mike was redshirting for the year and I was a starter at second trumpet.  I ran into Tepper as he was leaving the field and I was entering it for halfitme.  He said something like "We're dominating these guys, we just have to stop shooting ourselves in the foot."  Sadly, we all remember GMac dropping a td and Makonnen slipping at the goal-line; Tepper's remark was painfully astute.

In the summer of 2005, Tepper was protecting a fellow Cal athlete when a group of men ran him over with their car, breaking his leg in several places.  Mike will always have a place in Cal lore for his heroic actions.

Mike returned to the field in 2006, playing in every game and starting two of them.  He started all 13 games at right tackle in 2007.  A pectoral injury and subsequent surgery kept him out for 2008, so Mike returned for a 6th year in 2009, starting every game at left tackle.  He was selected to the 1st team all-pac 10 team and was an honorable mention All American.

Tepper graciously took some time out of his busy schedule with the Dallas Cowboys to answer some questions with the California Golden Blogs. 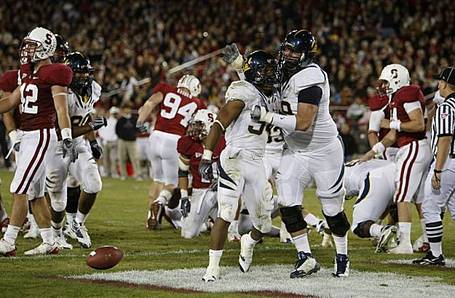 Happy times for all of us, courtesy of Tepper and Shane Vereen.

Mike Tepper: Training camp is extremely difficult. It's twice as long as any colleges Fall Camp. The players are bigger, faster, and stronger, which causes the sport of football to be more brutal and wary on the body. Not only that, but you're learning a new system and new language from new teachers.

CGB: Which players did you go up against in camp?  Who was the toughest to play against?

MT: The majority of my camp experiences were against Igor Olshanski and Stephen Bowen. Both men take their own skill sets that make them very difficult to play against, but they have helped me grow as an offensive guard

CGB: How many plays would you estimate are in the Cowboys' playbook?

CGB: Did the veterans subject you to any hazing, aside from the haircut?  And how do you like your new hair?

MT: The Dallas Cowboys do not haze anyone. They politely ask you to do things or assist in various areas. These areas differ between groups.

CGB: Thoughts on the differences between pro and college ball - anything surprising similar/different?  What's been the most difficult transition?

MT: The biggest difference between college players and NFL players is that ever individual on a NFL team was a great athlete and football player on their college team. They were all stand outs that were highly touted that understood the multifaceted of the sport. They, like I said earlier, are bigger, faster, stronger, and more attuned to what's going on.

CGB: What do you miss the most about Berkeley? 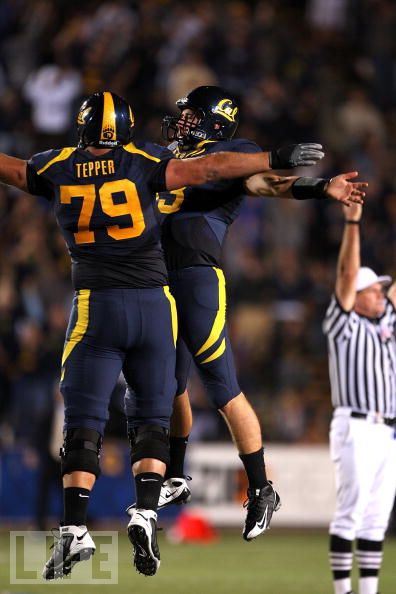 MT: Jerry is amazing. No crazy stories yet.

CGB: Have you talked to fellow Cal grad L.P. Ladouceur?

MT: Yes. I was a freshman at CAL when Lp was a senior. It has been a pleasure to reconnect at Dallas. 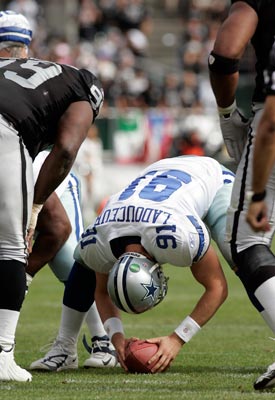 CGB: How well did Michalczik/Marshall prepare you for the pros?

MT: Very well; with minimal differences of technique between the NFL and college, I am very confident in my play.

CGB: How do you like playing guard instead of tackle?  What are the biggest differences, and do you feel more comfortable at one position or the other?

CGB: For one glorious play against usc, you were the bear ball carrier.  When MBIII inevitably goes down with an injury, are you going to take his place?

MT: I don't think the coaches will approve of me touching the ball. 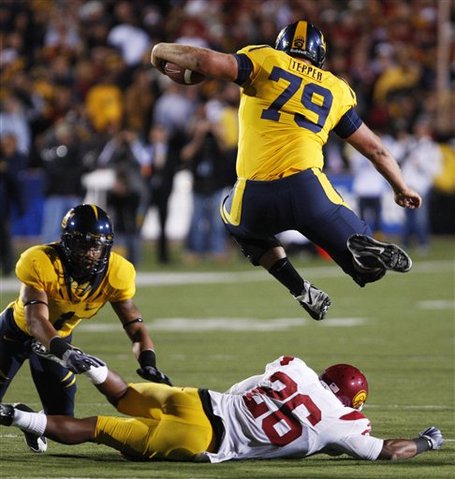 Thanks for your time, Mike!  We're all pulling for you to make the team - for the first time in my life, I'm a Dallas Cowboy's fan.