Share All sharing options for: 2007 Cal vs Tennessee: 4th Greatest Non Big Game of the Decade

This was about more than just revenge.

This was more than just about how Tennessee stole our playbook from practice in the weeks up to the game, so they knew what exactly we were planning. This was more than just about Erik Ainge, Robert Meachem and Jason Swain picking on an injured Syd'Quan Thompson for three quarters. This was even a little bit more than getting pasted on national TV after coming in with the best national ranking in five decades and seeing our title hopes burnt to ashes in front of our eyes, with 100,000 orange blurs belting Rocky Top (which at the time sounded like a chorus you'd hear if you were being dragged to hell) as Cal fans drank themselves to sleep.

No, this game had more at stake than that. And we can thanks, of all people, Les Miles.

The quote seemed benign enough, but it immediately caught fire on the Left Coast and spread furiously to every Pac-10 alum's computer.

"I would like nothing better than to play USC for the [national] title," Miles reportedly said in a speech to a heavily pro-LSU gathering in New Orleans. "I can tell you this, that they have a much easier road to travel. They're going to play real knockdown drag-outs with UCLA and Washington, Cal-Berkeley, Stanford -- some real juggernauts -- and they're going to end up, it would be my guess, in some position so if they win a game or two, that they'll end up in the title [game].

"I would like that path for us. I think the SEC provides much stiffer competition."

(Of course, the Pac-10 round robin went onto decimate the hopes of many a national championship hopeful (USC, Oregon and some other team I've never heard of all fell by the wayside). And Les Miles won his national title in spite of himself--just ask any Tiger alum how much they trusted good ol' Les on that road to New Orleans. The lesson learned here is the BCS is a farce.

So all of a sudden Cal-Tennessee became about more than just a grudge match. Suddenly it carried the responsibility of upholding the rep of the West Coast against the provincial arrogance of the South. It was In-N-Out vs Chick-Fil-A, Snoop Dogg vs Outkast, Wal-Mart vs Nike. Find a parallel in the cultural landscape and it was being boiled down to how well the Golden Bears offense could handle the Vols "S-E-C SPEEEEED".

2007 was the season we thought would bring us the glory. Cal's offensive firepower had mostly returned from a promising 2006 campaign, but the defensive cache was pretty much bare and in a transition season. We knew we could put points up (although even that would soon prove to be tougher than expected); what we didn't know was whether we'd be able to stop anyone.

Tennessee received the kickoff, and even though the noise was defeaning, the tension was palpable (at least with everyone who wasn't drunk). No one really knew if we'd be able to handle the Vols with Daymeion Hughes, Desmond Bishop and Brandon Mebane all departed. As Ainge started to move the Vols down the field on the first drive, that uneasy feeling started to build. Were we about to get hoodwinked again?

And then everyone in the stadium saw the missile moving, aiming directly at Ainge's back as he stood back to pass. We held our breath with each step, eyes dilating as Ainge started to move his arm back. The force started gathering at impact and then...

Pain Trained. 7-0 Cal. The pressure was finally released. And it was just football again.

Most of the first half was spent trading touchdowns. As expected, Cal's offense had their way. Nate Longshore found Desean Jackson and Lavelle Hawkins in short order as he ramped his way to a super efficient 19 of 28, 241 yard, 2 touchdown performance. Justin Forsett took up the mantle as the man to replace Marshawn Lynch, and showed his stuff not only as a between-the-tackles runner, but also as a pass catcher in the open field. Still, with Ainge taking apart a not-so-strong Golden Bear pass defense and pacing them to three efficient first half scoring drives, it was anyone's guess who would come out on top.

In three quick moments though, Cal quickly put an end to the myth of superior SEC speed. The first dose of pain came from the Wizard of Returns, much thanks to a key 3rd down open field tackle by (gotta love fate) Syd'Quan.

From the present to the future, in came true freshman Jahvid Best after the next Tennessee score to set up a Robert Jordan touchdown.

Not content to sit out this party, Justin Forsett came out on the NEXT drive to set up a late field goal (for those counting, that's about 160 yards in three plays).

Finally, the Hawk got his moment in the spotlight early in the third quarter.

A 14-14 game was now 38-21, and the Bears, already outracing the Volunteer competition, wouldn't have to look back. The Bears would even show some mettle by forcing a huge goal-line stand, making Tennessee's road to climb that much more difficult.

When they did make it a one touchdown game, a lot of people wondered if the Force could handle the responsibility of replacing Beast Mode. That seemed to be dispelled when Forsett pounded the ball throughout the 4th quarter, showing that Cal could not only outrace their southern counterparts, they could out-tough them too. This included what turned out to be the game-icing touchdown (a 13 yard gallop to provide the final scoring) and leading the way on a six minute game clinching drive that brought Tennessee's hopes of coming back close to nil.

In the grand scale of things, this might've been the important game of the decade, at least in terms of legitimizing Cal as a team to be respected on the national scene. It would probably have been #1 too (the atmosphere, the grudge factor, the stakes)...if the rest of the season hadn't happened.

Oh wells. At least we can say we can beat some of the best the SEC has to offer. 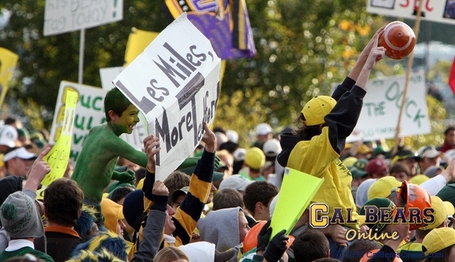 via www.calbearsonline.com (Buy the image here)