Share All sharing options for: Greatest Cal Defensive Backs of the 2000s

There used to be a Big Hit award for Cal defenders during the earlier part of this decade reserved for the fiercest hitters on this team. Gutierrez won this title in 2003. He had an impressive junior season, racking up 93 tackles. He had four games with ten tackles or more (10 against Washington, 12 in the Insight Bowl, 13 against Oregon State and Arizona).

The only thing he couldn't really do was get picks (he got one in 2004 against Washington). Nevertheless, he was one of the best hitters we've ever had in the secondary. 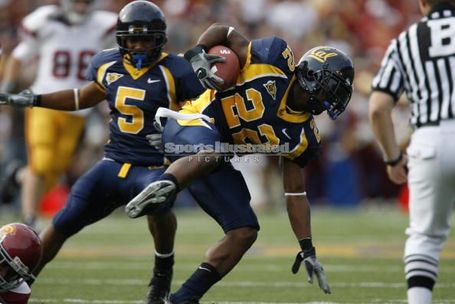 Plenty of impressive moments clutter Mixon's abbreviated career as a Bear. The pick six against Arizona State that started the rout and shut-out of the Devils. The six tackles and the forced fumble in the Coliseum in '04. The INT, three pass breakups and five tackles against 2005 Arizona. The fifteen combined tackles and five combined pass break-ups against BYU and UCLA.

An added bonus was that he was a pretty impressive punt returner in 2003 & 2004 before Desean took over those duties. Although he wasn't the home run threat Jackson was, he did manage an impressive 15 yards per return in 2005, and took one to the house at Illinois.

Unfortunately for him and for us, Mixon was injured in the 2006 preseason and missed his senior campaign, robbing Cal fans of a senior duo of Mixon and Hughes from dominating both sides of the field. Is it any wonder Cal's pass defense dropped to its worst levels with Mixon out?

When Gutierrez got injured early in 2003, Giordano stepped in. The two of them managed to rack up the tackles at the safety position (144 in all). His high watermark was the 12 tackle game against Kansas State, his first start, and managed eight tackle games on Southern Miss and Utah. The numbers dropped the next season, but that was more due to the strength of Cal's front seven rather than a criticism of Giordano's abilities.

Like Gutierrez, he didn't get many picks (one against Air Force, another against Matt Leinart in 2004), but the Cal pass rush and run defense were so good that it was hard for quarterbacks to even throw the ball in their vicinity. He also appeared to had better playmaking ability, forcing a couple of fumbles in 2003 and 2004.

Decoud was a pretty solid safety for us (and it's been proven again in the pros). He found guys and knocked them to the ground. Pretty simple. Nothing glamorous. He had a great 2007 season, even when the front seven finally wore out from attrition. He racked up 49 tackles in his final four games in a Cal uni. He was the Most Improved Defensive Player in 2006 and Most Valuable Defensive Player in 2007.

As for individual moments, he forced a fumble in the Arizona game that Tyson Alualu recovered for a touchdown. He chased Arian Foster down on a 42 yard gain and prevented a touchdown, setting up the crucial goal-line stand against Tennessee.

Plus...he'll always have that hit.

I wonder how many Cal fans thought our safety on some of the worst Golden Bear teams ever would end up becoming one of the greatest lockdown corners in the NFL. Just looking at the numbers, it's clear Asomugha was no slouch during his three peak years, but did anyone have any idea what he was capable of when he left for the pros?

This is a list about Cal, but his accomplishments aren't anything to scoff at either. He had a great 2001 Big Game (7 tackles, 2 passes broken up, 2 picks, 1 of those for a touchdown) that no one cares about because that game sucked to high hell. He averaged nearly 50 tackles his final three seasons (including 76 in his breakout sophomore campaign), and made some big plays along the way (other than the Big Game, he helped Cal knock off UCLA in the famous 2000 game with a pick-six and two pass deflections to go along with seven tackles).

And he was no slouch in the classroom either.

The leadership Asomugha displays on the field has followed him into the classroom. Last semester, Asomugha had a 4.0 GPA and is on target to graduate with an interdisciplinary field studies degree in corporate management and finance. After internships with the financial advisement company, PayneWebber in San Francisco, Asomugha has a plan for the future.

"If there was no football for me after college, I want to go to business graduate school and continue to study finance," Asomugha said. "I like the financial consulting and advising business and I think I've learned many things that will help me down the road."

However, if the future does hold football...

"Hopefully I have an opportunity to play at the next level. I think that is a dream the majority of college football players have, though not many see it come true," Asomugha said. "It has always been a goal of mine and I think my knowledge of the game and experience playing different positions should help me. Plus, I have the best defensive coaches who have taught me so much."

Thankfully, Nnamdi has had success in both walks of life, and it's likely to continue far into the future. 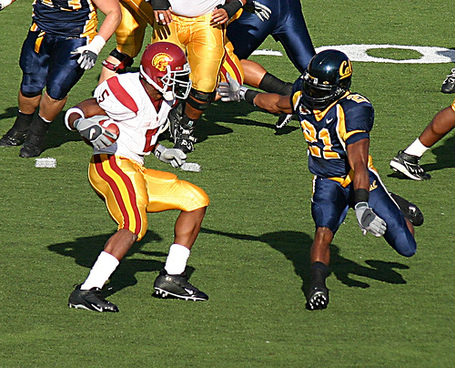 McClesky slips through the cracks of great Cal defenders--as a rover, he was the team defensive MVP both in 2003 (a pretty impressive honor for a sophomore) and 2005. His 102 tackle season in 2003 was the most since Jerrott Willard in 1993, and his additional accomplishments (12 TFL, 5.5 sacks, 11 passes broken up, 2 interceptions) put him in the running for best individual defensive season this decade for Cal. He was just so consistently good that nothing really stands out about him (hence why he slips through the cracks).

We haven't even mentioned that he played most of 2004 with a bum shoulder and was hardly as effective as he was in the season before and after.

"I've always sacrificed for the sake of the team," McCleskey said. "I just go out there and do the best I can. If it's one play, it's one play. Some people play okay when they're hurting a little bit - anyone can play hurt. But I was trying to play injured."

Without full use of his strength and physical ability, the rover had to learn the nuances of the defense and make smarter decisions. He had to learn where his help was going to come from and when he'd be on his own. He learned to put himself in better situations knowing he wouldn't be able to physically overpower opposing players.

"Being in that situation and being somewhat handicapped to life, I became a better football player and a better person actually," McCleskey said.

He probably deserves some consideration for first on this list, although third ain't so bad considering his competition. 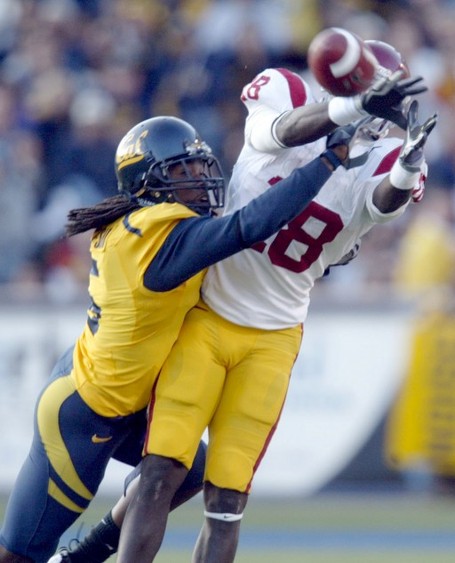 Probably the most accomplished cover corner Cal has had since Deltha O'Neal. A lock-down guy who pretty much shut down his quarter of the field his final two seasons, who was great in run support and made strong open field tackles. We've said about as much as we can about the Squid over the past year, so let's let Hydrotech relate this story from the Cal football banquet a few years back.

So why did Syd'Quan finish #2 on this fine list of Cal's best of the secondary?

Interceptions. Of all the guys on this list, Hughes got picks. Lots and lots of picks. A bit of a gambler, but most of the time his decisions paid huge dividends for a particularly weak Cal defensive squad. One of the few guys Bob Gregory trusted to let go, turn loose, and take risks on the ball. Doesn't anyone remember the famed Facebook group "Daymeion Hughes can intercept a North Korean nuclear missile!"? You know, back when Facebook was edgy and cool...

Hughes's interceptions have a life of their own. His first interception at Cal was a pick-six against Oregon State in 2003. He tortured the Huskies, picking off a pass in the red zone in 2003, a pick-six in the 2005 blowout, and one of the two red zone interceptions in 2006 (no, not that one, the other one). Take your pick of the best one. Was it the pick in the 2005 Las Vegas Bowl that secured the BYU victory, or the one against UCLA in 2006 that kept Cal comfortably in front before halftime, or the two pick performance in the 2005 Arizona shutout, or the...

Syd was great, but his play didn't help Cal's pass defense from getting torn asunder last season. Hughes atoned for a pretty weak Cal pass defense squad with all those picks, and played pretty decent corner coverage (like shutting down Jaison Williams in the famous 2006 Oregon game to only 66 yards) to earn 2006 Pac-10 Defensive Player of the Year honors. It's another one of those 1a/1b things where you can find plenty of reasons to go both ways.

I decided to go with the guy who could intercept warheads. Barely.