Where I Come From: Most Memorable Moments

Share All sharing options for: Where I Come From: Most Memorable Moments

This post is sponsored by EA Sports NCAA Football 2011.  Because all we ever get paid by our readers is compliments on our looks.

We've discussed many of these moments before in our decade in review series, but as John Madden would say, memorable moments make memorable games.  And vice versa.  And honestly, what's more memorable than another Boller to Ward, incomplete.  Or even, Boller interception returned by _____ for a touchdown.  Or Kittner to Lloyd, touchdown Illini.

So those were my formative memories of Cal football.  But we can delve into a few of the happier ones (and some of the more notable unpleasant ones) after the jump.  In no particular order.

Hydro's already stated that this is most likely the most famous play in Cal football in the past decade, and it's hard to argue otherwise.

In one play Tedford let us all know the Holmoecaust was over, and that we had a new visor-wearing chief in town. That we continued to roll up 70 points in that game made the day and game itself all the more memorable, but to anyone who lived through even a second of the Holmoe era, our opening play of the 2002 season filled the entire fanbase with hope.

The entire 2002 Big Game was one long cathartic moment for long-suffering Cal fans, as the stink of the Holmoe era was over.  This became the team's de facto bowl game as we were banned from postseason play due to violations under Holmoe (make up your own jokes here about how bad the team would have been without cheating), and winning the Big Game for the first time in eight years certainly raised everyone's spirits going into our first offseason under Tedford.

Another obvious inclusion.  The team wouldn't fully break out until the next year, and many forget that our man Aaron Rodgers was actually benched in this game for Reggie Robertson, but for one shining moment all signs pointed to our Bears becoming a national power - and soon.

Hype for our Bears as potential Pac-10 champions and THA1 as a Heisman candidate reached a fever pitch after DeSean Jackson weaved his way through the Tennessee punt coverage team for a 77 yard TD in the first ESPN prime time game of the year.  Hearing Brent Musburger and Kirk Herbstreit hype up the team and talk about how impressive it was (while at the same time wondering out loud what the hell was wrong with the treesitters) made the day's impressive way that much more enjoyable, but the most memorable moment of that day was undoubtedly DeSean's punt return above.

Umm… Just thought I’d clear something up. When Marshawn Lynch made the stiff-arm on Patrick Chung, Chung actually made the tackle, and slammed Lynch to the ground, thus taking him out of that game. Lynch wasn’t able to return after that play. As long as Chung made the tackle, nobody has anything on him. Chung was able to come back into the game, which is a lot more than we can say for Lynch. Thanks. (:

The second most famous Cal play of this decade.  Let's just move on.

Much like a fine wine, sometimes what matters most is the vintage of a particular brand.  So which do you prefer, Oregon State 2007 or USC 2004?

I couldn't find any clips of the amazingly bad special teams that Pete Alamar coached the team up to on that day. Sorry.  You'll have to settle for the mighty MJD scoring the game winning touchdown.

By the way, our Bears were ranked tenth in the country at the time.  Tenth!  With Joe Ayoob at quarterback!  Do you think that he puts on his resume that he QB'd a top ten team?

4. Cal loans the Axe to the Furd

I'll readily admit I'm a bit spoiled - at least to the point that I was saying to people before 2007 that I didn't view the Furd as a real rival to our Bears.  I mean, what did I know?  Our Bears got crushed in 2001 by the Cardinal (but then, they had been crushed but everyone already anyway) and we steamrolled them from 2002-2006, or nearly the entire time that I'd been a Cal fan.

Then we lost the Axe in 2007, our Bears lost their sixth in seven games since rising as high as second in the country, and our collapse was complete.  And their fans celebrated like this.  Only then did I begin to realize why we as a fanbase hate the Furd.

Cal and USC were headed towards another epic late-season showdown for the right to go to the Rose Bowl in 2006 when the team inexplicably laid an egg against the Wildcats. Even with the team's lackluster performance for most of the game, our Golden Bears would have won if DeSean Jackson hadn't been called for stepping on the sidelines in the fourth, negating a touchdown pass that would have put our Bears ahead. No YouTube clip of the call exists, so you'll have to live with Arizona fans celebrating stomping on our dreams to get to the Rose Bowl for the 46th year in a row.

Even more painful in hindsight is the fact that the team would have made it to the Rose Bowl if we had won this game even after the team's loss the next week to USC, because of their subsequent loss to UCLA.

What might have happened differently had Longshore not been injured in the fourth quarter of that game?  Would the team have won the next week against Oregon State?  Would the season have gotten derailed the way it did?  If Riley doesn't start the next week and get into the Air Force game, is there ever a QB controversy?  Do we Marshawnthusiasts ever finish polishing the Longshore statue, and do we ever start work on the frescoes of Riley?

Lots to think about, and a pivotal and memorable moment in Cal football.

The season had already gone off the rails by this point, my neck gets stiff just watching it, Jahvid still entered the NFL as a first round pick with the financial security that that status entails, and there was an epic Big Game victory to end the year, but this was the most memorable moment of the 2009 Cal football season for me.

3. Jahvid shows the world what he had for breakfast

4. Geoff McArthur fractures his right forearm before the 2003 Insight Bowl

Rodgers' favorite passing target was wide receiver Geoff McArthur, who was the Bears' leading receiver during the regular season, catching 85 passes for a school-record 1,504 receiving yards and 10 touchdowns. In one of the Bears' final practices before the Insight Bowl, however, McArthur fractured his right forearm and was unable to play. McArthur recorded the third-highest receiving total for a Pac-10 player and had the second-highest average receiving yards per game in the country during the regular season. He set California single-game records for receiving yards and receptions.

Extremely unfortunate story for McArthur - he spent half of his Cal career on truly awful teams and was about to finally get to a bowl game, then ended up missing it due to injury. We salute you, Geoff McArthur. You will not be forgotten...even if I can't find a single YouTube highlight clip of you. 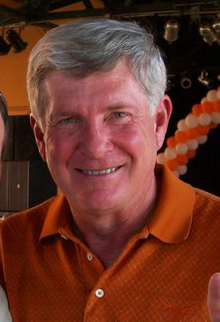 "If you've got a vote, vote for us," Brown said, pleading directly to voters in The Associated Press writers poll. "I'm asking you to do that and I'm asking everyone across the nation.

"This team deserves to be in the BCS," he said. "They deserve to go more than some teams that are being talked about."

The most controversial omission was California, ranked No. 4 in both polls. Texas overtook Cal in the final BCS standings to grab an at-large berth and will play Big Ten champ Michigan in the Rose Bowl. The Longhorns had a higher average computer ranking than Cal and received additional votes in both human polls this week, perhaps in part to Texas coach Mack Brown's lobbying and the score of Cal's final game, a 26-16 win against Southern Mississippi on Saturday. It is the first BCS and Rose Bowl appearance for Texas.

"I thought it was a little classless how Coach Brown was begging for votes," Cal quarterback Aaron Rodgers told reporters in Berkeley. "I think a team's record and the way you play should speak for itself."

Mack Brown put the rabbit’s foot aside today and appealed again directly to the poll voters who will determine Texas’ bowl fate. He appeared in a taped interview on ESPN’s "College GameDay" to renew the campaign. "I don’t care about me. I don’t care about who says I’m whining," Brown said. "It’s about these kids."

ESPN’s Chris Fowler said that Brown had lobbied him last night and noted that Texas sports information director John Bianco has been flooding e-mail in-boxes with the case for Texas.

I tried to make an effort to stick to on-field moments, but no list of memorable moments is complete with remembering why our Bears didn't go to the Rose Bowl despite a 10-1 regular season.