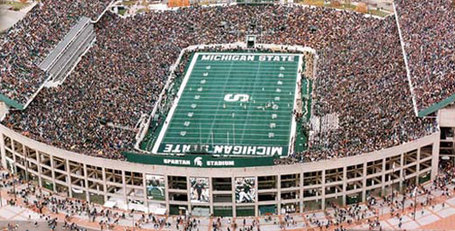 The year was 2002.  Cal had started off the season with a bang under its new head coach, Jeff Tedford.  In the opening game of the season, Cal defeated Baylor a whopping 70-22.  The next week, Cal defeated New Mexico State at home 34-13.  Cal fans were riding high off the back-to-back wins; back-to-back wins that they hadn't seen since the 1998 season.  As the final seconds of the New Mexico State game wound down, Cal fans even chanted "undefeated!" in celebration of their 2-0 start.   Yes, hard to believe but it's true.  Cal hadn't won back-to-back games for four years.  So, as far as 100% of Cal fans were concerned, this Jeff Tedford fellow was a god. 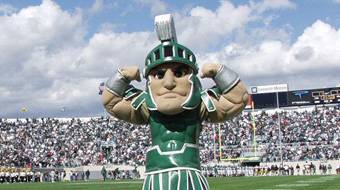 Michigan State was ranked #15 in the nation.  They were a legit Big-10 team.  These were no powder-puff pansies from the Sun Belt conference.  These were blue-chip prospects who were battle hardened from butting heads with The Ohio State, Michigan, and Penn State on a regular basis.  They also had some hot-shot WR named Charles Rogers (future #2 overall NFL draft pick) who was like really really really good, and can score touchdowns with only one shoe on and both hands tied behind his back.  In other words, Cal had no chance. 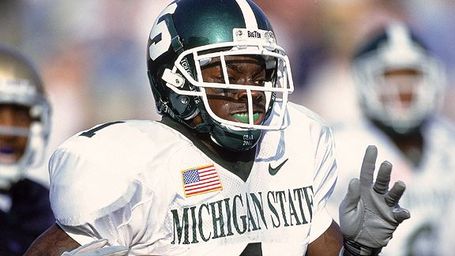 This whole beating-Baylor-by-48-points deal two weeks ago was pretty cute.  And then the whole winning-back-to-back-games deal was pretty slick too.  But Cal fans knew what was up.  Cal was Cal: doormat of the Pac-10. Cal was going to lose.

Even your very own beloved Marshawnthusiasts waived the white flag before the game was played.  In our (the Marshawnthusiasts) emails to each other last week discussing who would write this very post, we reminisced the reason why I would have to write this post:

Avinash: TwistNHook, Ragnarok, YellowFever, HydroTech, one of you guys should tackle [writing this post], since I don't think the rest of us were here.

YellowFever: I don't remember much about the game since it was away, and I'm not even sure it was on television.  Ragnarok, were you there for that?

Ragnarok: Funny story, actually.  TwistNHook, YellowFever and I all missed watching the Michigan State game (which *was* televised) because, since we were so terrible the previous year, I assumed we were guaranteed to lose that game and I went ahead and scheduled our fraternity's retreat for that weekend.  Whoops!

I think HydroTech is going to have to tackle this one. 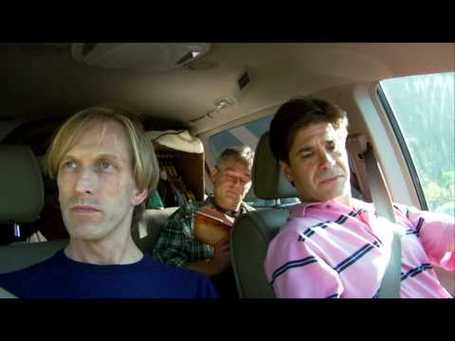 Ragnarok, YellowFever, and TwistNHook (from left to right) going on a fraternity retreat.

Don't you just love the optimism?  (By the way, that really is a transcript of our emails to each other)

So here I am, writing you this post because I did actually watch the game.  It was on TV.  I was young.  I was naive.  I had faith in this Jeff Tedford fellow.  I hadn't experienced the heartbreak of Cal Football losing a game yet, like my older fellow Marshawnthusiasts, and thus I did not purposely schedule some other activity on this Cal Football Saturday.

I remember turning on my little crappy 13 inch TV that I had in my room.  I might have been the only one of my roommates to actually have interest in the game.  My other roommates had told me beforehand that we didn't stand a chance against #15 Michigan State.

So I watched alone.  (I'm a loner in real life too.  Anybody want to be my friend?)

The game started off slow with Cal punting early:

Michigan State now had the ball, and Cal fans knew what was up.  Yup, time to give up a score:

Now time for the Cal offense to put some points on the board:

Noooo!!!  Alamar!  That blasted Alamar was cursing us even before he arrived at Cal!  (Pete Alamar did not join the Cal coaching staff until the year 2003).

So Michigan State gets the ball back and actually starts moving it against the Cal defense:

Cal stops Michigan State on a critical 3rd down!  MSU has to punt!  And then...

BOOMSHAKALAKA!   Cal is in the game, baby!

http://www.youtube.com/watch?v=OVq2cjInhkw#t=2m57s (click to see the youtube video of the punt return!  Thanks to swamphunter for doing this)

I remember watching Jemeel Powell run towards the upper right corner of my TV screen.  I started jumping up and down screaming.  My other house-mates came running into the room to see what was going on.

Their eyes were wide with amazement as if they were thinking: Cal wasn't losing by 21 points already???

Granted, it was only 7 points, and the rest of the first quarter slipped by without either team scoring more points... but then this Cal freight train started picking up steam.  Jeff Tedford, in a bewildering strategy, called for the offense to go 3-and-out so we had to punt.  What was he thinking???

Ah, but the genius of Tedford's strategy showed when Michigan State's offense took the field with their butts against their own goalline.  Cal had pinned Michigan State at their own two yard line.

You know what time it is?  SAAAAFFFFEEETTTTTYYYY!!!

Oh the genius!  The sheer genius!  No head coach in America would have the cajones to purposely have their own offense go 3-and-out to punt the ball and pin the opposing team against their own goalline in order to get a safety!  TEDFORD IS A GENIUS!!!

Seriously, ladies and gents.  If you watched this game, you were looking at the work of a genius.  Because, not only did Cal get 2 points, but it also got the ball back!!!  OMG!  Tedford knows his rulebook!!!

So Cal gets the ball back on the free kick by Michigan State and...

Field goal! Cal now leads 12-0!!!  Granted, it's still only a two-possession game, but Cal fans would take it anyways!  We were winning against the #15 team in the nation!

But deep in the back of everyone's mind was the thought: when is the real Cal team going to show up and lose this game?

Not today, baby, not today.

FFFFUUUUMMMMBBBBLLLLEEEE!!!  Donnie McCleskey recovers the rock!  Cal has prime field position at Michigan State's own 20 yard line.  And then...

MORE POINTS!  Another field goal!  I remember one of my roommates (one who had lived through the 2001 Holmoecaust) calmly say "wow, what's going on?!"

We were all waiting for Cal to lose, but it just wasn't going to happen.  The entire Cal team had been touched by angels.  They were the Harbingers of Good and Slayers of Evil.

OH YEAH.  YOU RED THAT WRITE.

LaShaun Ward threw a touchdown pass to Kyle Boller!  I remember that play pretty well.  The offense ran the ball to their right, with Boller booting around the backside undefended.  Ward then threw the ball to Boller who ran, gave a lil' shimmy shake to a defender, and bowled his way head-first into the endzone. 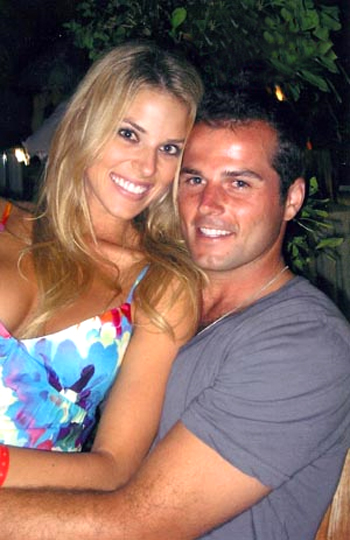 Kyle Boller has moves on and off the football field!  Congratulations, Kyle, on your marriage to Carrie Prejean!

This was getting unreal.  Cal was on the road, against the #15 team in nation.  In a hostile stadium of 72,000 fans, was putting a slow, but steady beat down on the home team.

Michigan State wanted dearly to get to halftime without giving up any more points.  Lucky for them, there were only 11 seconds left in the 2nd quarter.

Cal gets the ball back with time to spare on Michigan State's own 28 yard line!!!  Then MSU proceeds to aid Cal in scoring more points!!!

Wow.  By this time.  My roommates, and other people randomly in my place of abode had gathered in my room (I was one of the few people with a TV and cable in my room).  None of us could believe it.

Could it get any better?  Could Cal actually hold out for another 30 minutes and win the game?

Michigan State starts off the game with a long drive and a 7 point touchdown.  Clearly, they had had enough of this crap.

They decided to play defense too and on Cal's first play of the second half...

More crap........ the Cal team we all had known so well from 2001 was back, just handing out touchdowns like it's candy and today is Halloween.

But then Cal responds back!

And then to start off the fourth quarter...

Cal finally seemed to be secure and in the driver's seat.  And Cal finally put the game out of reach with its final touchdown to seal the deal...

Cal fans were in shock.  Most of us were really wondering if maybe, just maybe, this Cal team was actually pretty good and it didn't just win its previous two games because Baylor and New Mexico State sucked so bad.

Who does that?  There are rules in college football!  Upsets can't just happen like that for no reason!

Tedford didn't seem like he was surprised by what happened:

"I don't think we need to be surprised or giddy about winning" -- Jeff Tedford after the 46-22 win against Michigan State.

Tedford was instilling winning expectations into our team and fans.  No longer were Cal fans and players allowed to expect to lose.  Every game was winnable.  Every game should be won.

"We know we have the athletes to play with anybody in the country.  Our coaching staff has told us that, and we're all believers. We expected to win here, so we're not surprised.'' -- LaShaun Ward after the 46-22 win against Michigan State

Cal now sat a pretty 3-0 for the first time since 1996, which was coach Steve Mariucci's only season before leaving for the San Francisco 49ers.

Cal was even named "Team of the Week" by the Football Writers Association of America, and garnered a ranking in the following week's Top25.

I think it was after this game, when Cal fans finally realized, that this was a new Cal Football team.  Even before this game, Cal fans still had doubts about whether the team was really good or not.  Beating Baylor and New Mexico State doesn't exactly instill a lot of confidence in anyone.  But after beating Michigan State, people realized that the 2001 team really was gone.  The 2001 team wouldn't have beat a ranked opponent on the road.

This was 2002, and the Bears were back to being the hunters rather than the hunted. 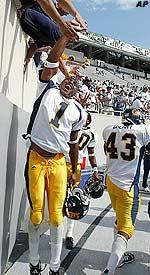