Where I Came From: My All-Time Favorite Cal Team

Share All sharing options for: Where I Came From: My All-Time Favorite Cal Team

This post is sponsored by EA Sports NCAA Football 2011

We Cal fans are blessed to have so many choices for 'All-Time Favorite Team.'  I remember that undefeat . . . wait, that hasn't happened in my lifetime.  There's that team that won the confer . . . hold on, that doesn't work.  What about the year that Cal earned their first ever BCS appear...OK, that doesn't work either.  Let's face it - in my 25 years of life, Cal has only had 11 winning seasons - 8 of which have come in the last 8 years under Tedford.

So I'm guessing we'll be getting lots of comments in support of 2004 and 2006.  Two teams filled with great players who were competing for the Pac-10 and BCS bids from September to November.  Both reasonable, excellent choices.  CGB may have even ran  multi-part series comparing, contrasting, and arguing the merits of each campaign, before reaching a verdict (apparently I'm a member of the CGB Supreme Court?)  But I'm going to talk about a different year.  A year with few expectations.  A year that began with many questions and ended with pleasant answers.  That year was 2003.

"What's that?" you say.  "2003?  The year that saw Cal lose 6 games?  A year with horrible, painful losses to Colorado St., UCLA, and Oregon?   How could that possibly be anybody's favorite team?"  Well, the fact that I was a freshman that year may add some bias to my opinion.  I had been a Cal fan for many years prior, but this was the first time I was able to attend a full home slate of games, and my first exposure to the passion of the student section.  But 2003 had so many more things going for it.  Consider:

-Cal was expected to regress from their 2002 7-5 campaign.  Jeff Tedford, hallowed by his name, had revived a struggling group, but the core of the 2002 team had graduated.  Names like Kyle Boller, Joe Igber, Nnamdi Asomugha, Jemeel Powell and Tully Banta-Cain were all gone, amongst other important contributors.  Cal's 1-3 start, in view of that kind of roster turnover, isn't surprising.  And not that you needed reminding, but Cal was just two years removed from going 1-10.  Cal dropped early heart breakers against Colorado St. and Utah - two games in which the Bears lost 4th quarter leads.  But that experience would prove invaluable later down the line.

-2003 was thrilling because you could see the core of a powerhouse football team coming together.  J.J. Arrington flashed his potential in a backup role and posted and impressive 5.7 yards per carry.  Ryan Gutierrez, Wendell Hunter and Matt Giordano grew into their roles as linebackers and gave Cal fans a preview of what would be a dominating defense.  Daymeion/Dante Hughes and Tim Mixon combined for perhaps the best cornerback pairing of the Tedford era.  And some dude from Chico named Aaron Rodgers gradually grew into an elite QB.

All of these players had to mesh into a unit, and their were growing pains.  Cal dropped tough, tough losses to solid teams.  An Alamar special vs. UCLA.  The infamous black-out game vs. Oregon.  But this Cal team didn't give in, didn't let the season spiral away.  Their goal - to play in Cal's first bowl game in over a decade - would not be denied.

-Cal's stretch run was a sight to behold.  After the loss to UCLA, Cal was sitting with a 3-5 record and could only lose once more to earn a bowl bid.  Cal proceeded to completely destroy Arizona, Arizona St., Washington and Stanford to earn that bid.  Aaron Rodgers and Adimchinobe Echemandu took control and Cal scored 42, 51, 54, and 28 points in those four wins while the Bear defense didn't allow more than 23 points to any opponent.

-2003 contained two of the most important wins of the Tedford era.  The 34-31, 3OT win over USC and 52-49 Insight Bowl victory over Virginia Tech launch Cal from a feel-good recovery story into a legit national player.  Beating USC meant that Cal could conceivably beat any team in the country.  Beating the Hokies confirmed that idea, and also launched Cal's 2004 campaign.  Of course, both games were thrilling, entertaining games in their own right.  But their importance to the program really push them over the top. 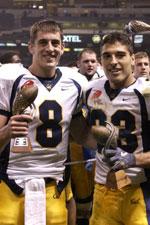 I'm guessing he'll be pretty good next year via graphics.fansonly.com

And that's why I love 2003.  There are few things I enjoy more as a fan than seeing talent gradually turning into production - into wins.  2003 had that in spades.  There are probably other reasons - the gumption of Vinny Strang, the yeoman work of Reggie Robertson, and the leadership and intensity of James Bethea, to name just a few.  2003 left Cal fans with the sense that anything could be possible in the future.  2002 wasn't a fluke.  Cal was oozing talent from every position, and the future was bright.

So what was your favorite team, Cal fans?  Bonus points for non-Tedford era answers!