Pac-10 Media Day, Part I: At Least Yellow Fever Was On Time

Share All sharing options for: Pac-10 Media Day, Part I: At Least Yellow Fever Was On Time

Yellow Fever may be the worst journalist ever, but at least he can get to events on time.  Last year the Pac-10 Media Day was at the Sheraton LAX, about 50 miles from where I live.  I took me an hour to get there, but I allowed myself about an hour and a half to get there.  The Rose Bowl is also about 50 miles from where I live.  Surely it couldn't take that much longer to get there, right? Surely it cannot take any longer than 2 hours and 15 minutes, right?  Nope.

Eventually I did arrive at the 2010 Pac-10 Media Day and it proved to be an entertaining, eventful, and annoyingly hot day.  I talked to the Almighty Tedford, I talked to The Prophet, and I even briefly talked to Uncle Ted.  The event had its ups and downs, but overall it was an enjoyable experience.  Next year I'll try to get there early again.  If I fail, we'll be forced to do the unthinkable: send TwistNHook to represent us.

In Part I of my experience at Media Day we'll look at the first block of press conferences (including Cal!), the unique setting for this year's conference, and the goodies they handed out to us.  If you're interested in another perspective, check out ConquestChronicle's coverage of the event.

After figuring out that the Rose Bowl parking lot seems to have sections named in random order (with letters of the alphabet, of course), I managed to park and get to the stadium right at 9:30, which is when festivities started.  Nevermind that I left around 7:15, I had finally arrived.  Nevermind that there was a sig alert, plenty of random traffic, and--quite literally--a kitchen sink on the freeway.  Unlike last year, when I arrived at 8:45 and spent the first 45 minutes talking to Tedford and others, I had to scramble to the field as soon as I arrived. 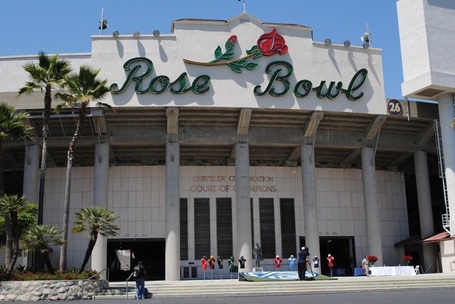 The new Pac-10 logo was on display pretty much everywhere.  These jerseys surrounded the logo.  The Rose Bowl Trophy was in front of the statue when I arrived, but it was gone as I left (and took these photos). 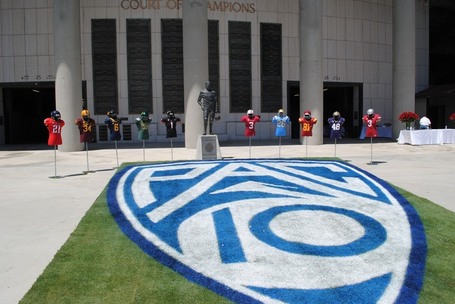 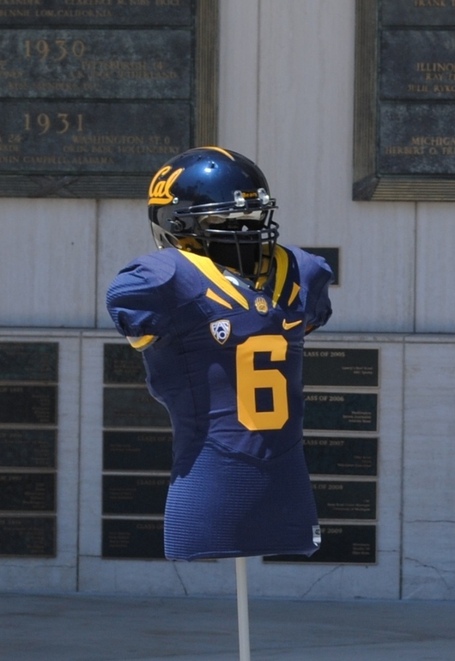 The Pac-10 facebook account shows the coaches standing by the logo (and next to the elusive trophy).  Naturally, Kiffin and Stoops aren't looking anywhere near the camera. 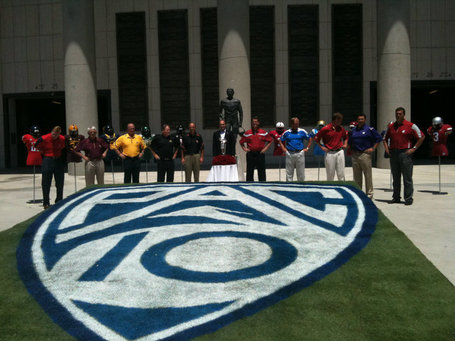 I shuffled down to the field where the event was taking place.  We were baking in the July sun while various media groups (ESPN, Versus, etc) had tents off in the distance. 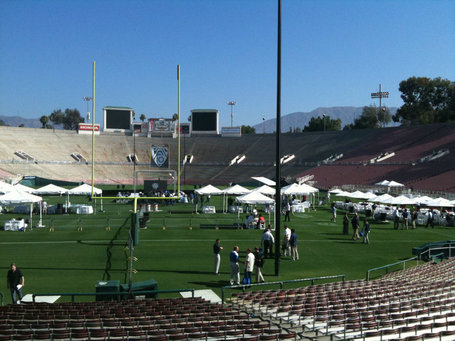 I signed in and of course, the person checking me in hadn't heard of SBN, nor did she seem to care who I was.  I could sign in as Dumpster Muffin and they'd still let me in.   On the way down to the field I picked up some brochures.  Larry Scott's knows how to win over the media: goodie bags!  I received a Pac-10 tote bag (not pictured), a pen, a lapel pin, notepad, and a flash drive with all the media guides as well as several files with the Pac-10 logo and that extended promotional video.  The Rose Bowl people felt bad that we had to sit in the sun all day, so they gave us free hats!  Though giving a Cal fan a Rose Bowl hat may seem cruel, it wasn't as bad as when they took Paul Wulff's picture as he stood next to the Rose Bowl trophy.  That was just mean. 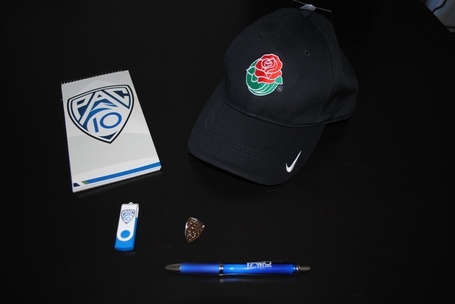 The brochures were about the same as they were last year.  They had run out of Stanford and USC brochures by the time I arrived, but the Oregons again had high quality products.  I was amused the OSU's said "Welcome to the Rodgers' Neighborhood" 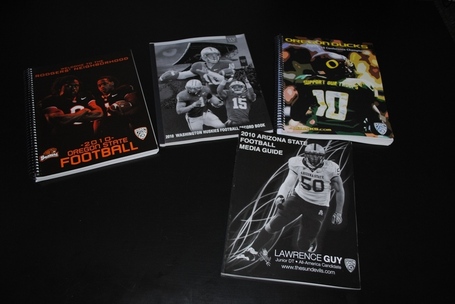 Some of the other brochures were not nearly as impressive.  At least Cal saved itself from having the most embarrassing brochures two years in a row: they had a color cover!  The Cal and UCLA media guides were just thick packets of paper that were stapled together.   Yay budget cuts! 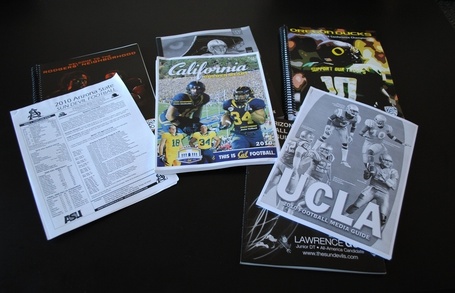 One of the first pieces of information I obtained was the media poll.  It was one of the closer (and clearly confusing) polls in recent years.  I'm still not sure who voted for UCLA.  I'm also not sure which people did not put WSU at 10th.

I got to my seat (behind Ted Miller) as Larry Scott was talking about allegedly important things.  I missed the announcement that there was wifi, but it didn't matter because soon enough I found out that the network had crashed.  He also spoke about the new Pac-10 logo.  He talked about what the shield, mountain, and wave all represent and managed to say the word "shield" about 30 times.  He emphasized the the logo will be on every field and every uniform this year.  I'm not the biggest fan of the new logo, but at least it's going to be changed to Pac-12 once Utah and Colorado join.  When he finished up, it was time for players and coaches to take the stage.

Before I continue, I'll initially say that pretty much every coach had the same response to these two questions: how was the NY Media Day? How would you like the Pac-12 divisions split?  People kept asking and getting the same responses.  What's their deal?

Coaches generally enjoyed the NY events and appreciated the opportunity to get some exposure on the east coast.  Marketing the Pac-10 has been a big goal for Larry Scott and the coaches seem very happy with how he's addressing that goal.  Regarding the division split, everyone wants to play the LA schools due to the recruiting base in Southern California.  They know their players would love to play in LA in front of friends and family.  Because of this, all the teams want to be able to visit Southern California each year.

Now, onto the press conferences.

The conferences began in reverse order of finish, so Wazzu was up first.  Here are some tidbits for you closet Washington State fans.  Also, as Yellow Fever can attest, Paul Wulff is a frightening individual.  He's large, intimidating, and has a bizarre head. 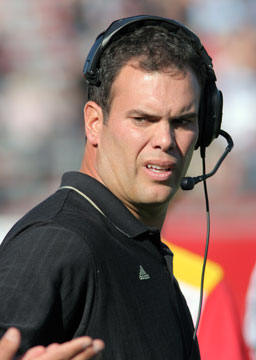 I wonder if his players find him as terrifying as I do...
Arizona State: Dennis Erickson and K Thomas Weber
UCLA: Rick Neuheisel and S Rahim Moore 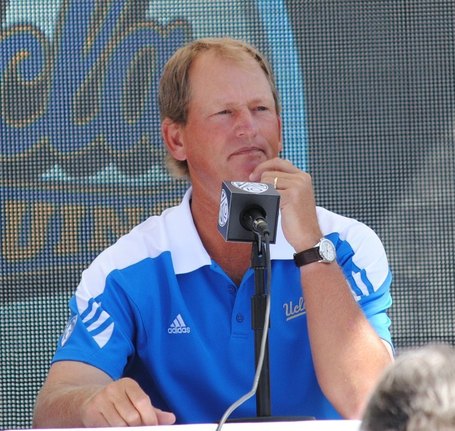 Neuheisel thinks of more ways to talk about USC without referring to them by name.
University of Washington: Steve Sarkisian and LB Mason Foster
University of California: Jeff Tedford and LB Mike "The Prophet" Mohamed
With Tedford wearing gold and Mohamed wearing blue, Cal was the only team whose participants didn't match. 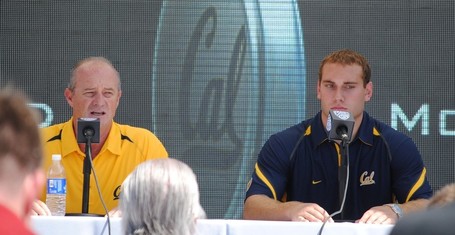 With the first five conferences done, it was time for a fifteen-minute break (and some Gatorade for the parched masses).  Tune in to Part II to see if my laptop was still at my seat when I got back!