Share All sharing options for: Day 1 of the National Pac-10 Media Tour - Or How Yellow Fever is the Worst Journalist Ever

On Monday I reported live from the Cal Reception at MJ Amstrong's.

On Tuesday I priced a convertible bond with an embedded Bermudan call option. 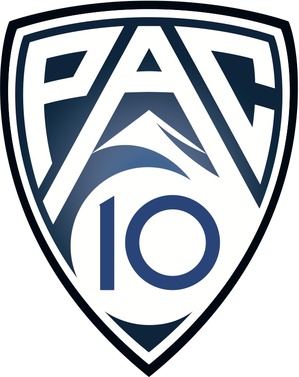 Oh yeah, I also went to day one of the Pac-10 national media tour.

Notable events from Monday? Probably nothing you haven't heard or seen already from our buddies at Bears with Fangs, who did a fantastic job with his writeup there. What I have to add to that are my personal experiences there and questions that I asked to Tedford and Sandy one-on-one:

I proceeded to go get my hors'deourves (6/10, as I mentioned) only to find that my previous seat was taken by these two rather large guys that I didn't recognize. I didn't mind a great deal as I had some tweeting to do, and waited for Sandy and Tedford to address the crowd... 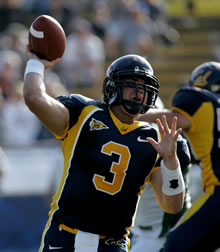 ...wherein Tedford revealed that the two large guys who took my spot were Steve and Eric Levy. Well then! For what Sandy and Tedford talked about, you can take a look at the previous link to Bears with Fangs, as he has a great recap there.
After Tedford and Sandy made their prepared remarks and answered a few questions, it was back to mingling with the proletariat of bear territory. I tracked down Sandy again to ask her what her thoughts were on the recent university report condemning the athletics department (though my exact words were, how do you feel about the university task force report throwing the athletics department under the bus?), and her response is that it is a legitimate issue, and it's an age-old question - how many resources should an institute of higher learning devote to athletics? But it's not her job to question that, and it's just her job to work with what she gets. If the university decides to cut funding, it's her job to let the chancellor know that the performance of all of the teams affected is likely going to suffer, and there's no way around it.
I had thought about talking to Levy and asking for an interview, but decided that it looked like he was enjoying himself, so I'd track him down later...
...like Tuesday. I should probably mention up front that I wasn't expecting to get into this thing, and I was completely unprepared. I spent most of my day working on the aforementioned convertible bond and putting a memo together before deciding I'd make the short walk to the W Hotel and crashing the party. I wasn't confident that I would get in, but we'd heard through the grapevine that our buddy Paragon SC would be there, so I thought it would be worth a shot. 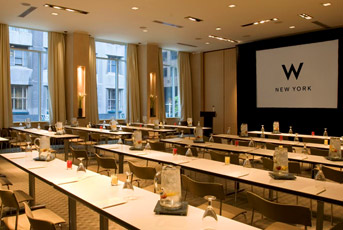 I ran into Sandy again outside the ballroom, and she either didn't recognize me, or was confused about how the hell I got in. After all, I hadn't told her that I write for CGB, only Tedford. I ran into Paragon in the waiting room after we signed in, and this spared me having to explain what was going on to Sandy. We collected our media guides, USB drives, Pac-10 pens, and notepads, then sat down and marveled at the Pac-10 wives in attendance.

Paragon and I agree - Sarkisian's wife is attractive

Kiffin walking around like he owns the place. His wife is attractive as well

So that was nice. Other thoughts - Ted Miller looked like a cool guy, Stewart Mandel is really quite short in person, and I couldn't pick Andy Staples out of a lineup. Miller's recap of the event indicates that he was there...but I honestly couldn't recognize him. Dude must not look like his SI.com picture.
Everyone was herded into the main room, with all of the coaches sitting up front with Commish Larry Scott, and five tables labeled with coach names, arranged by rival (Cal/Furd, Oregon/OSU, UCLA/USC, Arizona/ASU, Washington/Wazzu). I almost sat down at the Washington table along with Paragon - then when he realized he'd rather talk with Kiffin I took a powder on the thought of sitting with Paul Wulff and sat over at the Furd/Cal table.
We opened with the new Pac-10 media video, and I was sufficiently awe-inspired to want to clap at the end. But I didn't. I tell you, it was hard to fight the instinct, because I've just been trained to clap after that sort of thing at any type of corporate event whatsoever. But thankfully, Stewart Mandel and his death stare reminded me not to do that.

Mandel has what looks like a permanent scowl on his face. Probably because he's at Kiffin table

OMG HE'S STARING AT ME

Scott went through some prepared remarks about how the Pac-10 brand is one of athletic and academic greatness, how the conference will be mathematically correct (Pac-12 on the way!) and how the conference is poised to increase its awareness and presence nationally through it's national media tour. And with that, each coach was headed off to his table to speak with individual reporters.
Uh oh. I was expecting a panel discussion similar to what happened during Pac-10 media day where I could just blend into the crowd, raise my hand every now and then, and let other reporters run the show. I wasn't prepared for this.
I looked back at the table. I didn't have any questions prepared. Everyone else got up. I was gathering my things, when Harbaugh walks up to me.

Now, I've never been a reporter for anything in my life. Not even a fake reporter. I've never even interviewed my dog. The most difficult question I ever asked a sports personality was asking Jarvis Hayes when he would take Bobby Simmons' starting job. Right in front of Bobby Simmons. And here comes Jim Harbaugh. I'm telling you, it's easy to sit back and say, "YES! Ask him the tough questions! What's his deal! LOL~~~~".
Yeah, it's not that easy. I mean, he's probably not answering that if I'm an asshole, you know?
I stammered out that I write for the Cal SBN blog (no signs of recognition), a couple questions about how he likes his team ("very much"), whether he thought Gerhart should have gone higher (not so important when he went, but it's good that he went to a team that's a good fit) and whether the passing game will pick up this year (yeah, we're seeing some things)...then I slunk off into a corner to regroup.
This was not a good start. I walked off, surveyed the landscape, introduced myself to Ted Miller (Hi, Uncle Ted!) and regrouped. What kind of questions was I going to ask? Who did I want to talk to? What the hell am I doing here?! 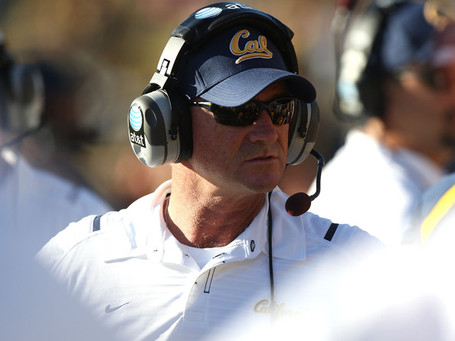 Then Tedford sat down with Steve Levy. Thank Tedford! He graciously offered to give me the number of the member of the sports department who handles credentials. Another step towards conquering the white whale! But rather than take up more of Tedford's time (who did recognize me), I figured it would also be great to talk with 2005 Big Game hero, Steve Levy.
Tremendous guy. Here's what I asked him about:

Great stuff!! the only thing I would change is where I see my self being at the top of my career.The Craig James comparison is on key... . In a perfect world I would like to do 1 game a week(Thursday) and sit in a studio ALL DAY Saturday breaking down all of the games for pre game, half and post game analysis. Kirk is the man and Love him, but I see my self more like James and that's what he does.

On Monday when I mentioned to the other writers of our blog that Levy was there, they wanted me to talk to him right then and there, and gave me some damn good questions to ask. So I did.
Of course, we all know it's not Tedford's MO to run up the score (as witnessed by the 2004 Southern Miss game) so this seemed a bit odd at the time. Also, exactly who scored was also a bit strange. So I'll let Steve take it from here:

We're standing in the huddle, and I said, coach wants us to take a knee. Meanwhile, Eric Beegun is yelling at me, SCREW IT, LET'S THROW THE BALL. Because he was a guy who was mostly a blocking tight end and had never caught a touchdown. I look around and I say, we're not throwing the ball, we're running it. Because I'm looking over and I see that Bryan Schutte is in the game. You see, Schutte never scored a touchdown and everyone liked the guy.
So we break the huddle and we come out in a run formation, and coach is on the sidelines going crazy because we weren't in a victory formation (set to take a knee). I hand the ball off and the entire defense parts and Schutte just walks right in. Everyone on the team loved that moment because Schutte, well, I don't think ever played football again. He quit the team the next year, because he was a biochem major and he couldn't handle the load anymore, but to this day, when I see the guy. I know he keeps that football.
It's on me as the quarterback to be the team's leader, and I was being a leader. But Tedford gave me, well, let's just say when I got back to the sidelines he wasn't happy. I know he's got a good relationship with Coach Fran (then-A&M coach Dennis Franchione) so he has a lot of respect for him.

Tremendous guy. Can't say enough about him. I'll even have to start watching MSG now, even though I hate the Knicks. Go Bears. Oh, and if you're reading this Mark Levy, we'd appreciate it if you'd say hi. Your son says you read all of the boards and the blogs, so we'd love for you to say hello!
I gathered myself. I'd successfully pulled off my first interview! This was exciting. I still didn't have a recorder, or even a suit, but every little bit helps. I slunk back into the corner and overheard bits of Harbaugh's conversation with another report (Andy Staples? Like I said, I'm still not 100% sure he was there, though Miller says he was), and Harbaugh was discussing his four steps to winning.
But I didn't want to just stalk the guy after my abysmal failure. So I looked around to see who was unoccupied. 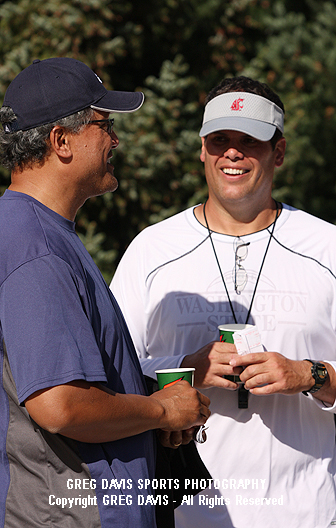 I sat down next to the largest, scariest, meanest coach I'd ever seen in my life and gave him the most generic questions I could think of.
YES! Another good job. I was on a roll. I reevaluated the room: 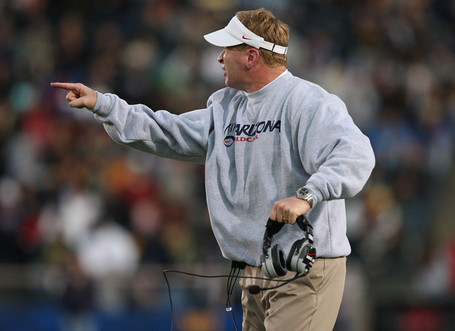 I rolled over to the Arizona table and introduced myself.
I thanked Mike Stoops for his time and wandered for a bit. Collected my thoughts. And saw that the only coach not occupied was Harbaugh.
Uh oh. Ok, breathe. I consulted with Steve over my faceplant with Harbaugh and he gave me a few tips on what to ask. So I did. And I talked to him again.
At this point the questioning round ended and everyone was to head down to the cocktail bar for a reception. Extremely conscious of how much I'd already botched things, I figured it would not be a good idea to combine open bar with Pac-10 head coaches. Questions I would have liked to ask, but didn't get to:
Overall, it was a learning experience, to put it mildly. And really, my one thought is, I hope I didn't mess up our chances to get a press pass, if ever there were any chances to begin with. As a matter of fact, I probably should have found Sandy after it was all over and asked her about it. But c'est la vie.
Berkelium97, you're up Thursday!