In a surreal span of eight months, Chris Martin has left an undeniable impact on Cal football. He fell into our laps after the Charlie Weis firing in Notre Dame and Charlie Strong departure in Florida. He helped recruit some of the biggest members of our 2010 class, talking with them excitedly at the Army All-American Bowl about the chance to play at Cal. He became the future of Cal football overnight, a defensive star that would have the same galvanizing impact on attracting top class talent that Desean Jackson had a half-decade ago.

Then, with most fans having seen not a minute of tape on him, or watch him put on the Cal pads, much less a glimpse of him on Telegraph, he was gone to Gainesville (he'll be redshirting and will sit out a year). Just like gunsmoke, he came in with a huge bang and disappeared without a trace.

Like any football athlete trying to fulfill his dreams, I wish him all the luck whereever he goes and that he figures out how to avoid the 'distractions' that have been weighing on him since returning to the Bay Area. Because (shocker) I don't like seeing talented 18 year old kids fail. Here's to hoping he ends up in a situation where he can mold and develop into a strong athlete and individual.

To all the people who want info, I don't really have interest in the circumstances as to why Martin left. The only thing I care about is how his departure affects our football program going forward. Let's talk about it a little after the jump, and why those panicking about what this means for 2010 are overreacting just a bit.

Martin's departure hurts. But it doesn't hurt us this season. giantfan5 has been watching the team closely and had this to say.

Disappointing for sure, but I don’t think it’s going to have too negative of an effect on the team. Like someone said above, Martin wasn’t really in the mix for this season, but for down the road. He really wasn’t around much at all during the past few weeks for off-season work outs. Honestly, I don’t think guys on the team had much of a chance to get to know him at all. I don’t think anybody else is going to jump ship over this, so it sucks, but the sky isn’t falling.

After watching the formerly coveted Devon Kennard take all season and a dozen injuries to round into form at USC, I kind of figured Martin would have a similar learning curve. He'd showcase his talents over time, given time. So this might have an impact on 2011 and 2012 when we're in need of outside linebacking help.

For 2010 though? Well, let's look at solarise's visualization of linebacker depth based on experience. 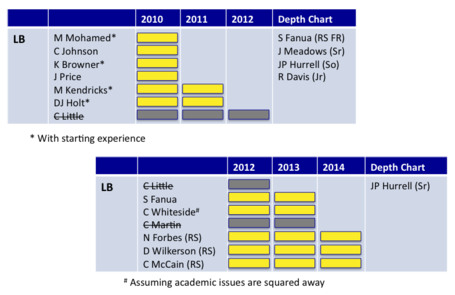 Chris Little's dismissal hurt us more, right now. Little seemed to have all the chops to start, and was seriously being considered for a starting position. Without Little, it pretty much means some Golden Bears new to the grind will have to see a lot of it this season (not necessarily as a starter, but a backup), and they'll be forced to do things in Clancy Pendergast's defense that they can't quite handle yet. That's where the defensive breakdowns begin.

(It could also mean more of the 4-3 fronts that Pendergast was showing in spring practice might get put into play. Our defensive line depth isn't too bad and we might have more experienced guys up front rather than in the middle of the field.)

Keith Browner is a likely candidate. He's our current DE/OLB hybrid guy and has shown plenty of potential to rush the outside. He didn't produce much last season, but got a lot of first-team snaps all spring.

As for the other outside linebacker? It figures to be Mychal Kendricks, who missed all of spring practice after shoulder surgery. Kendricks performed well in the Pointsettia Bowl in terms of getting to the quarterback (even when he was playing in a role similar to a defensive end, shedding the right tackle for a sack on Jordan Wynn). Kendricks showed great promise that he could evolve into a consistent pass rush threat; whether he can make the leap this season remains to be seen.

Jarred Price is the other guy who has a shot. But after two sacks in the first two games last season he ended up with only 0.5 sacks the rest of the year. He might end up having to get second-team snaps if Kendricks and Browner are ahead of him, although the position looks like it'll be fluid.

Finally, there's Ryan Davis, a JC transfer who is another DE converted into LB. Both he and Price figure to be the best options behind Kendricks and Browner. He redshirted last season and could get some looks if he can impress in fall camp--Tedford was excited about what he'd see from him this spring, although he didn't really differentiate himself from the pack.

All things considered, he's done a lot for us. Let's make sure to do the same back and support his development as a player in Florida.