CGB Classic: Interview With Member Of The Phoenix Five

Share All sharing options for: CGB Classic: Interview With Member Of The Phoenix Five

As we embark on our 3rd year at SBN and near our 5th year in business, sometimes we think back to all the work we did that fewer people saw.  We're so thankful for the readership we have today, but know that it wasn't always like this.  A lot of the posts that we wrote several years back weren't as widely traveled and got lost to the mists of time.  We wanted to try to bring your attention to a few of them.  Today, we have a post from approximately our 3rd week at SBN about the Phoenix Five.  Don't know who the Phoenix Five are?  Well, strap in and get ready to find out!  GO BEARS!  You can find the original post here.

Sure, you could read all about The Phoenix Five's LEGENDARY prank of stealing The Tree all in Wikipedia.  But does that give you really the whole story?  Wouldn't it be better to get it straight from the horse's mouth? 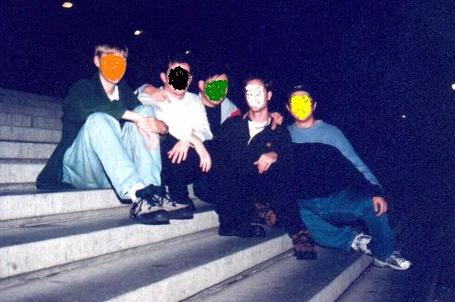 If you are a newer fan and have NO idea what I am talking about, here is the first paragraph of the Wikipedia article:

The Phoenix Five were a group of five University of California, Berkeley (Cal) students who stole/liberated the Stanford Tree from the Band Shak on the campus of Stanford University in the early morning hours of October 17th, 1998. The Phoenix Five held the 10-foot tall costume and university's unofficial mascot "hostage" for two weeks, and the reaction to the heist by school administrators fueled a frenzy of media coverage which resulted in the prank being regarded as one of the most famous and notable in the history of the Big Game rivalry between Cal and Stanford. The Phoenix Five used pseudonyms to hide their true identities, going by Mr. Black, Mr. Green, Mr. Orange, Mr. White, and Mr. Yellow.[1]

With the 10 year anniversary upcoming, it feels like it is time to get the inside scoop on the last prank of any real note between the two schools.  And the only prank I can really think of (unless you count all the times the trumpets drove over to Stanford to play at 3 in the morning, which I don't, since they were doing God's work).

California Golden Blogs: How goofy did you feel grabbing the tree?

Mr. Orange:  I don't think I really felt "goofy" per se, although it was kind of goofy cramming it into the back seat of the car with three of us back there at the same time. Remember, it was a 9-10 foot tall costume with a ton of material, even though it was somewhat collapsible. I don't know about the other guys, but I more or less felt like it was a mission that we had to accomplish in the stealthiest way possible. We were very aware that we were in hostile territory.

Even though we managed to get our hands on the Tree in the very early hours of the morning, this didn't mean that there couldn't be random students walking by, cops passing by on the street, etc. In fact, we actually did see a cop car (or more than one?) pass as we were planning things out behind the Band Shak.

Also, we had no clue whether there were people still inside the Band Shak when we returned there around 4am. We knew that the band was having a party there after the basketball event, so of course there could still be passed-out drunk Stanfurd Band members inside after that party ended. I remember lots of nerves during that time, when we really couldn't be 100% sure that there were no people left inside that building. It was pretty dark inside, save a few neon signs, etc. I remember there being discussion about whether to abandon the whole thing...that's how tenuous it was. So yeah, I don't think I really thought too much about the craziness of the whole situation at the time...we were just focused on getting the job done without getting caught.

California Golden Blogs:  Was this spontaneous? Or meticulously planned out?

Mr. Orange:  That is covered in the Wikipedia article. We knew where the Tree was because we followed Chris Henderson to the Band Shak after the Cardinal Chaos event. As was reported in more than one publication, it was a "crime of opportunity." We had no intention of doing anything related to capturing the Tree when we arrived at the Farm. The most planning that went into this was who would go inside, and who would keep watch. The majority of "planning" of course, happened once the Tree was back at Cal.

California Golden Blogs:  Anything else you'd like to tell us about the original night?

Mr. Orange:  The other main issue that night was getting to the Tree in the first place. Of course, if it had been almost any other building besides the crappy ass Band Shak, procuring the Tree wouldn't have been possible. Sure, there was some physical force used to get to the Tree, but it wasn't like we had to bust through windows (there was an open window in the back), pick locks, etc. One of the many humorous things related to this story was that when we received immunity from prosecution for returning the Tree, the police stated that we wouldn't be liable for any damage caused to the property because the Band Shak was scheduled to be torn down that year anyway. (It was really a piece of shit, but an appropriate place for the Stanfurd Band to reside.) 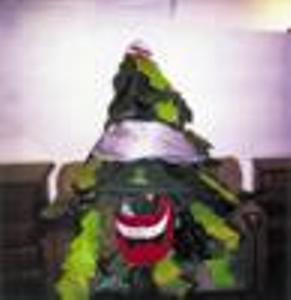 "I'm having a great time in Berkeley!  I never want to go back!"

California Golden Blogs:  What made you guys decide to go down the "hostage taken" path that you all chose?

Mr.  Orange:  As far as the hostage-taker deal is concerned, I think there was an initial meeting where we planned all of these things out, i.e. the name of the group, sending in the initial letter and picture to the Daily Cal, etc. Remember, everything happened extremely fast. After we took the Tree, nothing happened for almost an entire week, until the story broke in the Stanfurd Daily. Then, we had to act quickly to demonstrate that the Tree was on the Cal campus and to dissuade others from claiming responsibility, and of course, as smart Theta Chis, we had to come up with the wittiest approach. We had lots of fun writing that first letter, in the persona of the Tree, trying to trash Stanfurd in the best way possible.

California Golden Blogs:  What pressure was put upon you guys after Berdahl's threats came down regarding Oski at the Big Game?

Mr. Orange:  The Oski not performing part wasn't a concern at all. From the outset, we said that we'd return the Tree in time for Big Game. I don't think it would have been a big deal had Oski missed performing at Oregon State, or wherever. Actually, that was another funny detail...I believe Berdahl said that Oski would be banned from performing at that first road game, but then it was discovered that he hadn't planned on making the trip in the first place. Silly!

In all honesty, we knew that no one had a clue who we were at the outset. We got the Tree without anyone seeing us, so the whole police investigation was a big sham. They claimed that they had stopped a car with 5 Cal students on campus that night, but to this day I dont know whether that actually happened, or if it was just some attempt to get us out into the open. I think out of the five, I was the one who felt the least amount of pressure. I was a 17 year old freshman, not living at the house, so I was a minor in the legal sense and not around the actual Tree on a regular basis (since it was being kept at the house for awhile.)

The older guys in the group obviously felt more pressure as time went on, as more people were finding out about our involvement. One was up for a big scholarship, Mr. Yellow could have been deported (at least that was the claim), so even though I was really disappointed that the Tree was returned after such a short period of time (2 weeks), I can understand where they were coming from. There were major discussions concerning whether to return the Tree...I was lobbying to hold onto it until Big Game, take it on a road trip, etc., but the older guys in the group probably had better information on exactly how close we were to being discovered. So yeah, we never did get close to being caught, and I'm pretty sure we could have held out a little longer and done more fun things with the Tree, but again, as the youngest, I wasn't in the best position to make the important decisions.

California Golden Blogs:  How did you get in contact with the local news stations?

Mr. Orange:  I think most of, or the entire press thing, was set up through our contact at the Daily Cal. (Remember, she was dating one of the brothers at the time.) For instance, in our exclusive piece with the local FOX station, I'm pretty sure (not 100%) that she was the one asking Mr. Green the questions...I think they only brought a camera there to the secluded location. Outside of actually "being" the Tree and walking out in front of the stunned brothers at the chapter meeting, my favorite memory was dancing around in front of the camera in the middle of the night outside of an elementary school in the Oakland Hills. 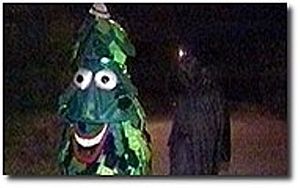 California Golden Blogs:  How do you think it would have been had it been burned?

Mr. Orange:  I think it would've been sad had the Tree been burned. It really took a liking to us after spending some time in Berkeley, and we kind of got attached to it as well, so a slow, painful death wouldn't have been appropriate. Even though the Furdies felt it necessary to put it through a wood chipper, I'm sure the process was a quick one, and the suffering was minimal. I still don't understand why they'd do that to their own mascot, but nothing really surprises me about Stanfurd or its students.

Thanks to Mr. Orange for the straight dope.  Maybe the Daily Cal wants to do a story on a 10 year anniversary/reunion of the Phoenix Five for their Big Game edition? Anybody got any contacts here?  GO BEARS!