Cal Fans, Who's Your Favorite Golden Bear Of The Decade?

Share All sharing options for: Cal Fans, Who's Your Favorite Golden Bear Of The Decade? 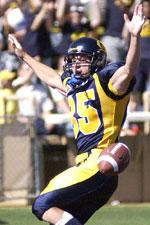 We'll be doing a lot of all-decade lists the next month as we bridge the gap between offseason and preseason, so hopefully you're sufficiently entertained by us. But now's your chance to get your voices heard, starting with choosing the athlete you loved the most from the past decade!

Ponder these criteria before submitting your nomination!

1. Love. This list is meant for the athletes you love, not just admire or think are the best. They may not be the most accomplished Bears out on the floor, on the field, or whatever realm they compete in, but there's something else you just feel for them that goes beyond the numbers and the honors.

(In other words, think of the criteria as different from greatest Golden Bear, which will be coming later this month.)

2. Favorite moments. Think about which athlete you focused on when watching the game. Which one caught your attention the most? Who did the most for you and who were you the proudest of when you saw them perform?

3. The desert island question. Answer the question this way. If you were stuck on a desert island, and you could only have the choice of watching highlights/mixtapes of one athlete from here to eternity, who would you pick? Or If you could buy one Cal athlete's jersey and wear it, whose would you buy?

Here's what you have to do:

1. Submit a nominee and describe why they're your favorite. Best comments will get inserted into the final post, and could you earn more recs.

2. Rec the nominees you agree with in the original post, reply to those comments with your own explanations as to why they're your favorite. Again, best comments will get inserted into the final post.

Top 10 athletes with the most recs get inserted into Monday night's poll! In the meantime, Happy America Weekend!