I think just about every true Cal fan dreaded this game.  The similarities to 2004 were just too obvious.  Cal was again the 2nd best team in the Pac-10.  Again they had lost a close, tough game to USC.  Again, they would be facing a Big 12 also ran from the state of Texas.  Again, only pride would be on the line in a game with no real national implications.

And for one drive, those fears seemed justified as a horrible sense of déjà vu washed over the Cal faithful.  Texas A&M’s option attack badly gashed Cal as the Aggies scored the opening touchdown on a drive that looked disturbingly easy:

19 yard run.  12 yard pass.  9 yard fun.  7 yard run.  19 yard pass.  It was disturbingly easy.  Each of A&M's 'three headed option monster' got in on the action.  Cal was getting fooled by the pass, fooled by the option, and it didn't look like they were anywhere close to solving the A&M riddle.

So what transpired the rest of the way in the Holiday Bowl was one of the most pleasant surprises I’ve ever gotten in the Tedford era.  There would be no repeats of the Texas Tech massacre.  The 45-10 final score was an accurate representation of the beat down Cal game the Aggies.  Marshawn Lynch and Justin Forsett ran wild.  Nate Longshore found his trio of speedy wide receivers with frequency and accuracy.  Desmond Bishop, Daymeion Hughes and Mickey Pimentel finished their Cal careers by leading a dominating, hard hitting performance against an offense rarely on the wrong side of a physical domination.

The matchup was interesting beyond football Xs and Os.  You will be hard pressed to find two schools with more philosophical and cultural differences.  Of course, none of this has any bearing on the football field, but it would have been depressing to lose to the Aggies and have to hear about how much softer West Coast football is than Big 12, Texas football for another long off-season.  If nothing else, Cal fans should fondly remember the 2006 Bears for authoring comprehensive defeats of two prominent members of conferences that take their football just a tad too seriously at times.


Warning:  Video contains both bad music and NSFW lyrics.  But it DOES contain massive amounts of Marshawn, Justin and Desmond awesomeness.  Gotta take the good with the bad

And Cal didn't beat A&M with sort of west coast, Pac-10 stereotype strategy.  This was not a pass-happy, no-defense all-offense shoot-out.  Cal ran the ball 32 times and passed the ball 24 times.  Only one passing play went for longer than 28 yard, and none longer than 43.  They gained 78 more yards on the ground in 6 less attempts and averaged 3.2 yards per attempt more.  And after that first drive the defense stiffened and made every big hit and every big play. including three 4th down stops.  HydroTech broke it down way better than I can:

For the final part of this analysis, I would like to talk about the common misconception that with Dunbar we abandoned our "smash mouth", and "physical" style of play for a finesse offense.  Frankly, I hate hearing stuff like that said because it’s about as true as the whole "SEC owns the Pac-10" cattle excrement that we hear all the time.

The game didn't actually become a blowout until Cal scored on their first two offensive possessions of the 3rd quarter to expand a slim 14-10 halftime lead into a 28-10.  Texas A&M wasn't a team built to come from behind, and Cal cruised in the 4th quarter, highlighted by some Steve Levy shenanigans as the Bears scored a late, not-approved-by-Tedford touchdown.  But by this point everybody was too happy to care.

As for players of the game?  That's a tough one.  Nate Longshore had a quietly efficient night, spreading 19 completions to 8 different receivers.  Desmond Bishop totaled 12 tackles and perhaps swung the game emotionally with a number of huge hits on Aggie QB Stephen McGee.  And Marshawn Lynch metaphorically passed the running back torch to Justin Forsett as the duo gained 111 and 124 yards respectively.  Forsett's yards came late in the game against a defense that was already tired and battered from trying to tackle a relentless Lynch. 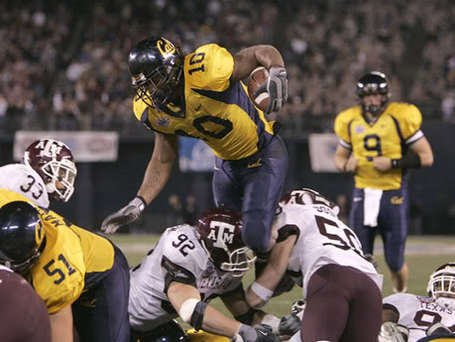 Marshawn cares not for your attempt at 'tackling.'

In many ways, 2006 was a simpler time.  A time before Marshawn Lynch had been arrested  on multiple occasions.  We sometimes forget how incredibly popular Beast Mode was back then.  The Holiday Bowl would turn out to be his swan song in blue and gold, as most of us assumed at the time.  He left us with many great memories, and he went out as only he could:  Ghost Ridin' into the sunset: