Greatest Cal Linebackers of the 2000s

Share All sharing options for: Greatest Cal Linebackers of the 2000s 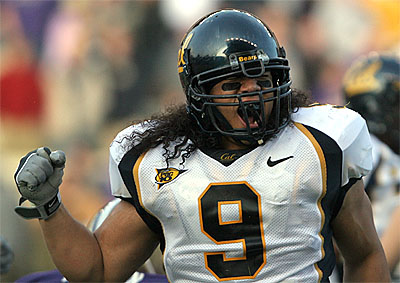 Our original pass rushing linebacker, Maningo had a solid 2004 campaign, notching 45 tackles and six sacks. In his final six games in 2003, he recovered from a tough injury to notch 31 tackles and two interceptions, one against Arizona that set the stage for Cal's 42-14 romping of the Wildcats.

Nixon's 2001 Big Game performance is something to behold: 10 tackles, a fumble recovery, a blocked field goal. No one remembers any of that because we lost, but still. His best game in 2002 came against Arizona, with 9 tackles, 3 for a loss, and a sack. He also notched 10 tackles against Air Force and 8 against Wazzu the year before. He went 1-3 in those games. Matt Nixon had some rotten luck when producing his best games. 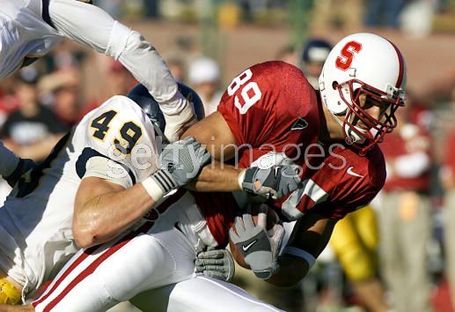 We have to acknowledge that Scott has the most successful career on this list, and his contributions off-the-field are representative of a true Golden Bear. Plus we like him a lot. What can we say?

Still, despite the low numbers compared to everyone else, they're quite good for a defender who played on the crummiest teams and defenses of the decade. His 2001 campaign was solid on a winless team--60 tackles, 7 tackles for loss, 3 passes broken up, 1 quarterback hurry, 2 forced fumbles. He won the Stub Allison award for most inspirational player on the squad. I'm guessing most of the inspiring stuff stemmed from playing so well on such a bad team.

While we might overrate him for his pro success, he's no doubt a Golden Bear we're all proud of now. And I'm sure being a Super Bowl champion doesn't hurt one bit. 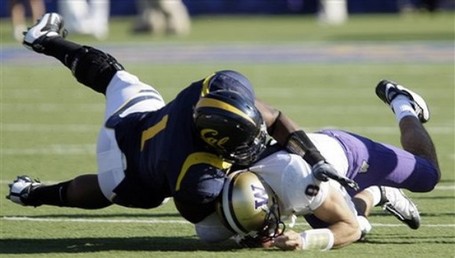 Because he was better. He was a solid anchor of that 3-4 defense. He was more disciplined, held his gaps, and defenses did their best to run away from his side. Nevertheless, he had seven games of six tackles or more in 2008.

Williams had his moments too. He returned an interception 50 yards up against Oregon to give Cal some breathing room in the downpour at Memorial in '08. He scooped up the ball on the sack of Erik Ainge and raced to the end zone to give Cal a 7-0 lead against Tennessee. He recovered a fumble in the defensive duel in LA against USC. Most impressively, he started his final 36 games of his Cal career, one of an indomitable linebacking trio. 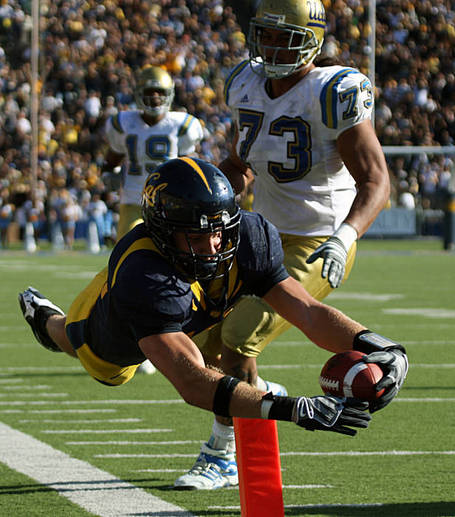 On his way to climbing into the top 3 of this list when all is said and done, Mohamed has produced a solid first three years most Bears would greatly enjoy for an entire college career. Mikey Mo still has one more season to go.

His 2008 campaign was a revelation--Mohamed sprung to the forefront immediately, benefiting the greatest from the senior linebacking presence. A lot of teams tried their best to attack Mike's side of the field, and he showed off his abilities, racking up 87 tackles, second on the team.

However, his season was no fluke. The next year, Mohamed came into his own as our defensive leader. In 11 of last year's 13 games, Mohamed racked up 7 tackles or more--in 8 of those games he managed 9 or more. He led the Pac-10 in tackles, something only one other Bear has done this decade. And a certain interception sealed his place in Cal football lore.

A solid 2010 campaign could anoint him the Greatest Golden Bear linebacker of the decade. A great season could lift him even higher. 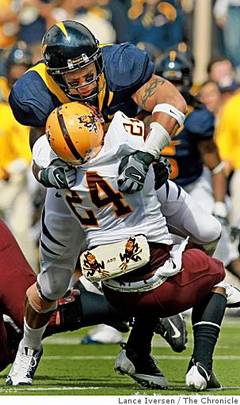 Felder was undoubtedly one of the most fundamentally sound linebackers, perhaps the best form tackler on that 2008 squad that dominated the majority of Pac-10 offenses (he led the team in tackles with 93 that season). His final two season stretch is unbelievably impressive--194 tackles, an average of seven to eight tackles per game. He had six tackles in 9 of 12 games in 2008, coupled with nine tackles in nine of 13 games in 2007.

Felder never wowed anyone--not many sacks (he had only three) or interceptions (two). One of those picks was a biggie though--the interception of Dennis Dixon in that bizarre four turnover 4th quarter in Autzen. Felder's pick set up Forsett's go-ahead touchdown and the final margin of victory for the Bears.

The most productive linebacker on our 2004 dynamic defense, Hunter was second on the team with 70 tackles, 6 tackles for loss, 3 sacks and 2 picks. He missed the first game against Air Force and did not lodge a tackle against New Mexico State, but then roared off 8 against Oregon State and USC respectively, another 7 against UCLA and Arizona the next two weeks, and then had two 6 tackle games against Arizona State and Washington.

But his most dominant stretch as a linebacker came the year before in 2003, when he compiled 40 tackles in a four game stretch, highlighted by his dominant performance in Champaign. Hunter compiled 15 tackles and three sacks, his final sack taking out Jon Beutjer in the red zone on the last play of the game to preserve the 31-24 upset of Illinois.

Two years. Keep in mind these stats by Desmond were logged in TWO YEARS.

Joe Ayoob's teammate at the College City of San Francisco, Bishop ended up stealing the spotlight from the much-maligned quarterback. In over three-fourths of his games as a Golden Bear, he finished with seven tackles or more. His 2006 season was probably the greatest by a linebacker this decade--126 tackles, almost 10 tackles per game, and averaged 11.2 tackles per game down the stretch. He made Rivals as a third-team All-American. His 2005 campaign wasn't too shabby either--89 tackles, 62 solos, led the team in tackles in seven games.

His most famous play came when he stepped into a Carl Bonnell pass in overtime and sealed the epic 2006 Washington game. He had 16 tackles on top of that for his best performance in blue and gold. 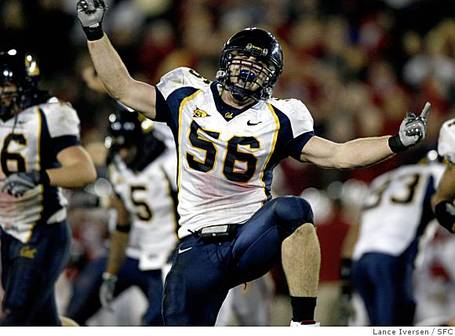 In the end, the pass rushing ability of Follett puts him at the top of this list, but only narrowly so. He is definitely the defensive fan favorite of this past decade, thanks to his fearless, reckless ability to rush the passer. He had a banner 2008 campaign as the vocal leader of the Cal defense, notching an impressive 10.5 sacks, 23.5 tackles for loss, 5 forced fumbles, 6 games with 7 tackles or more. No one was freed up more by the 3-4 than Follett, who would often find himself roaming in offensive backfields while his mates took care of the rest.

He also notched two of the most critical defensive plays of the past decade--sacking Jacory Harris to set up the go-ahead touchdown in the 2008 Emerald Bowl, and most famously blindsiding Erik Ainge to jar the ball lose for Williams's TD return in our revenge match with Tennessee.

It doesn't hurt that he does things like this now.

Bishop or Follett? Tough call for me. What say you?