Between the SAHPC photo posts, Twist's gameday photo posts, and the variety of photo-based fanposts that pop up, it's clear that several of us are interested in sports photography.   By chance, we were able to get in contact with former Daily Cal photographer Nathan Yan, whose very impressive portfolio and excellent Xs and Os of sports photography post led us to ask him to do an interview for CGB.  Like norcalnick's football television production post, this seemed like an excellent opportunity to learn more about sports journalism from a professional perspective.

In Part I of this interview, Nathan tells us what it's like to work as a photographer for the Daily Cal, using their equipment and covering a variety of sports.  He talks to us about some unusual experiences (almost being hit by a Kevin Riley-launched air strike, having Jorge fall on him) and even gives us some hints on how to accommodate redshift and blueshift when photographing someone like Jahvid Best!  In Part II, we'll look at some tips and tricks the rest of us can use to improve our sports photography.  Many thanks to Nathan for giving us some exceptionally detailed and informative answers to all our questions.

Nathan Yan: I actually started my interest in photography from an engineering perspective - I was always fascinated with gadget technology and the science of how it all worked, and had done a lot of reading on image sensor technology and optical design.  So the summer right before my freshman year at Berkeley, I decided to finally pick up an actual camera to put theory to practice.
I joined up with the Daily Cal my first semester as well.  I was the editor for a newspaper at my high school, so joining the staff for the Berkeley newspaper was one of the first extracurriculars I looked into doing.  At that point, I had only had my camera for about a month, and wasn't completely sure I'd end up on the photography side of things - I think I actually applied to something like three different departments.  But the photo editor at the time, Salgu Wissmath, took a flyer on me, and the photography job at the Daily Cal was probably the biggest stepping stone for me at the start - it gave me motivation and access to get out and shoot getting me motivation to go out and shoot, and meeting and learning from many more experienced photographers as well.


CGB:  Do you use your own equipment for Cal sports events or do you use the DC's gear?
Nathan: Depends on the sport - for football there's some higher-end equipment (super telephoto lenses like a 40mm f/2.8) that I don't have access to, so it's a mix of my equipment and the pool equipment.
Most other sports aren't quite as demanding (or are at least, lower profile than football), so I use my own equipment otherwise (usually a kit of the Canon 5D Mark II and the 70-200mm f/2.8 IS lens).

CGB:  Do/did you do photography for any other sports besides football?  If so, which sports are the most and least exciting to photograph?
Nathan: I do shoot some of the other sports - actually with only a handful of games a year and the competition for the limited press passes they give out, I've probably shot more cumulative hours of basketball, track and field, tennis, and maybe water polo than I have football.
I think a lot of sports photography is your personal interest in spectating the game.  There are a lot of sports and types of shots that are probably boring to most people, but if you know some of the subtleties of the game, and how spectacular some of the feats are, you can appreciate the photos much more.  Just about every water polo shot of the goaltender impresses me, knowing just as a novice swimmer how insanely powerful and fast they have to be to adjust position in the water to make a dive to block the ball.  In football, a lot of my personal favorites are very busy "running back in traffic" photos.  A lot of people simply take them as "Wow, look how quick and elusive Best is to run through so many guys", but the part I really like about them is seeing the offensive line in the background or off to the sides blowing open a huge hole or absolutely manhandling a defensive end.
But in general, and from a personal perspective, I really like football and track and field just for the sheer variety of what you can shoot.  I think football is one of the most dynamic sports in terms of what happens on the field - players can pass and catch and run and tackle and break tackles, so you'll end up with a huge variety no matter what.  Track and field is similar, just because they have so many different events going on - I can't imagine shooting the same repetitive stuff for an 8-hour baseball game, but I've never been bored at one of the big meets.  Water polo is also great, if only because the splashing water makes for such an awesome backdrop.
I'm sure the boring sports are in the eye of the beholder, but I'd probably beg baseball as the most boring out of all of them.  I'm a huge baseball buff myself - it's hands-down my favorite sport to follow - but there just isn't much going on, visually.  Pitchers always throw the same way and batters always swing the same way - you would be hard pressed to tell the difference between a picture of a batter slamming a homerun or hitting into a pop fly.

CGB:  You probably spent a lot of time on the sidelines.  Did anything spectacular or unusual ever happen right in front of you (like Ezeff's forced fumble against Oregon in 2007)? Anything like this? 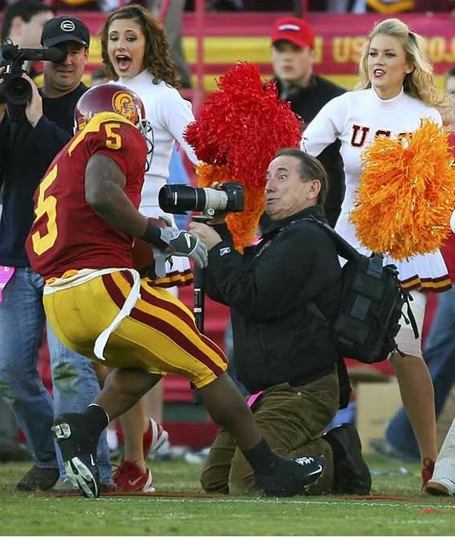 Nathan: To be honest, even with all the time I spent, I don't know if I ever had one of the big Cal sports moments of the past few years happen literally right in front of me.  I did get to shoot a few big moments, though - the big women's basketball win at Stanford in 2007 while I was a freshman was actually my first ever sports assignment.  I was also the one who got the shot for Jahvid Best's season-ending concussion in the Oregon State game last year.  It was kind of spectacular to see him fly so high to score the touchdown, but you got this sickening feeling the moment he landed.  It was a very scary few minutes.

I've had a couple of near-misses while covering sports. I'm a little fuzzy now on the details, but the first was a football game at Washington State in 2008.  I think Riley had overthrown a pass out over to the sideline, and the receiver was racing straight towards the sideline, at our group of photographers.  I was tracking him along until he was a few yards out and I realized "oh crap, he's gonna hit me", and then I slid over just enough.  I forget if he actually caught it, but he made a dive or couldn't stop himself at the sideline, and I remember he slid straight into the position where I was sitting just a second before.
The second time I actually got hit, but it wasn't too bad.  It was a 2009 men's basketball game vs. Iowa State, and Jorge Gutierrez was trying to grab an out-of-bounds ball and couldn't keep his balance.  I was sitting right under the hoop, so he just sorted ended up falling on me.

CGB:  I'm sure you've taken plenty of pictures of Jahvid Best running for touchdowns.  How do you account for redshift or blueshift in your photos?
Nathan: Heh, well it's actually not too difficult - you could adjust for redshift and blueshift by shifting back the color channels in your image - for redshift, ultraviolet light ends up getting recorded in the blue photodetectors, light in the blue range gets recorded as green, and green ends up being recorded as red, so you can derive the original colors from that.  Of course, longer wavelength light gets shifted to the infrared spectrum, which most cameras can't record, but I don't think you would have caught Best in a red uniform anyway.
CGB:  Do you have a favorite photo you took from your time with the DC?  Care to share it with us? 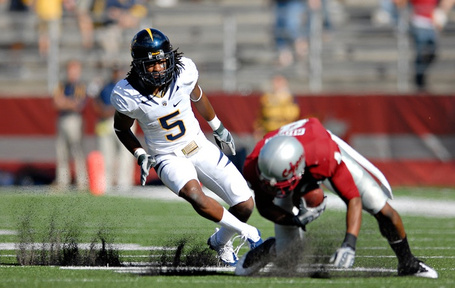 Nathan: Most of my favorite photos are actually on the news side - but to pick one on the sports side, it'd probably be this photo of Syd'Quan Thompson zeroing in on a Washington State receiver (Brandon Gibson).  I got really lucky with the framing - mostly I'm shooting on the other side to catch the offensive moments, but I had hung back after a change of possession and happened to be in the perfect position to get Syd'Quan chasing down the receiver like he was a predator after some helpless, flailing antelope.