Share All sharing options for: Greatest Cal Defensive Linemen of the 2000s

Tafisi passes under the radar of strong Cal D-linemen because of who he played with, but he made his presence felt. A JC recruit from Mt. San Antonio, he earned second All Pac-10 team honors twice. With one of his compatriots receiving the majority of attention, Tafisi got his opportunities with standout individual performances: 2005 Oregon (7 tackles, 4 tackles for loss, 1.5 sacks), 2005 Oregon State (8 tackles), 2005 Arizona (5 tackles, 2 TFL, blocked field goal), 2006 ASU (4 tackles, 2 sacks, forced fumble) 2006 Wazzu (blocked punt and a sack), 2006 Holiday Bowl (3 tackles, sack on 4th down). Not too shabby.

Yes, Tosh has done some special stuff for us off the field and you might think that's the reason he's on this list. But he did have his moments in six injury-filled years. In 2003 he led the Bears defensive line in tackles (one that featured two pros you'll see later on this list). He could never get healthy and have the same impact as his compatriots, but he did have his moments--5 tackles and a sack against UCLA in 2003, 6 tackles against Oregon State the week before that, and finished the season with a broken thumb. It didn't hurt that all that injury time helped him gain valuable coaching experience from Ken Delgado... 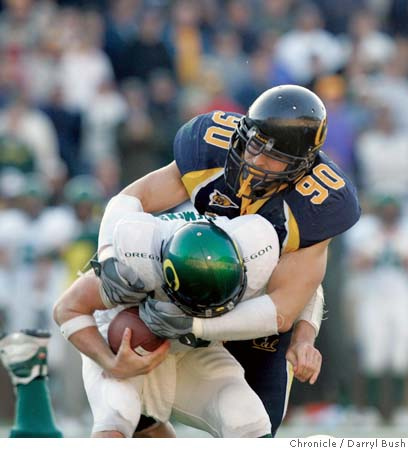 Perhaps our best edge rusher of the decade and the best playmaker on this entire list. Riddle scored 6.5 sacks in his first year out of El Camino Junior College, he showcased his ability to rush the edge early, putting up three of those sacks in the 34-2 trampling of Southern Miss. He had additional sacks against Virginia Tech, ASU, and UCLA.

That set the stage for 2004. Riddle's performance that year was perhaps the best single season performance by a defensive end, ever, as he set a record for all-time leading sacks. He was named the most valuable defensive player of the 2004 dream team, and deservedly so. He had four two sack games (Oregon State, Washington, Furd, Southern Miss, which came along with multiple tackle for losses in each performance); a five tackle, 1.5 sack game against the Trojans (and 2.5 of those tackles for losses). He also forced two fumbles in the 2004 Big Game, and forced and recovered another one in the ASU shut out.

Special season. It's shockingly only enough for sixth on this list. 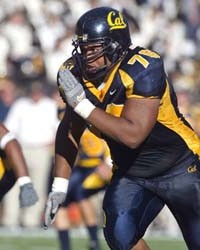 Not able to rack up the individual numbers probably kept Alexander from rising higher up this list. Even though he's had a decent pro career, he always went under-the-radar as a great Cal defender because he couldn't pile on the numbers.

No matter. He was the early leader of our Tedford offensive lines, spearheading our 2003 and 2004 defenses to stellar efforts (three defensive shutouts, twice more keeping their opponents in single digits). He commanded quite a bit of attention, opening up opportunities for compadres like Riddle and the linebackers behind him (we'll talk about them in the next post in this series!).

Oh, he had a few individually strong games--in 2003 he had 5 tackles against Colorado State and 6 against Utah, and in 2004 he managed two four tackle games against Air Force and Oregon, along with forcing and recovering a fumble against Arizona State. But helping make sure the rest of his defensive compatriots got a lion's share of the glory thanks to the respect he commanded was probably his biggest contribution. 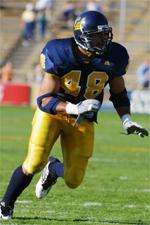 His professional success has placed him a little bit higher than Riddle, but there was no denying his ability in college either. His 26.5 sacks only trail Regan Upshaw and the next person on this list for most sacks all-time as Golden Bears.

He was the team's defensive MVP in 2002, and he definitely had the moments to back it up. He forced five fumbles in 2002, including one against UCLA that set up the game-winning Igber run. He had six tackles and four sacks in the lone Rutgers win of 2001. He racked up 4.5 sacks and forced a fumble in the second victory against New Mexico State. He had an incredible 20 tackles for loss the entire season, including 3 against Arizona State and Baylor each, another 2.5 against Arizona, and another 2 in his reclamation of the Axe.

Although he wasn't a main contributor, he does have Super Bowl rings too. You could say he's the most accomplished professional Golden Bear on this list. 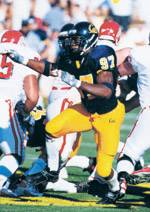 Unfortunately for Banta-Cain, he was on the same field as this guy, so he might not have even the most accomplished Golden Bear on his own line. Not a terrible thing to finish second to Captain of the Hit Squad though.

We know, this is a borderline selection only because his only season this decade was the first year of the decade. Unfortunately for Carter, he was stuck playing on Tom Holmoe's teams from here to eternity, and our defenses never looked very good while he was here. (In one of the million questions that Tom Holmoe must answer before being employed as any sort of coach again, he must answer legibly how Cal had Carter and Banta-Cain on the same line for two years and could only manage FOUR wins.)

His greatness cannot be disputed though. He was the leader of the Hit Squad. He's Cal's all-time leading sack leader. And he had plenty of best game performances. He had two fumble recoveries in the upset of Oklahoma his sophomore year, and another two sacks, six pressures and eight tackles against 12-1 Nebraska (one of the few bright spots in that 45-0 obliteration). And he led the Cal defense to their [current] last win at the LA Coliseum, a 28-16 upset of USC.

Compromise then? Third seems right. The other two on this last just did more this decade. 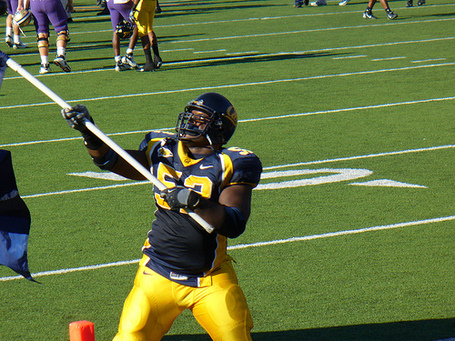 Quite simply one of the most imposing Golden Bears in the frontline and definitely our best interior threat over the years. He was voted the most valuable D-linemen in 2005 and 2006 and was first team Pac-10 both those years. Facing constant double teams both seasons, he still led the team in sacks in 2005. Even when facing plenty of TRIPLE teams in 2006 he managed to pile up another four.

Best games? So many of them. He tackled John David Booty for a safety in our 23-9 defeat in the Coliseum. He anchored a crucial goal-line stand against the Cougars that snuffed out any chance at victory for Wazzu in Pullman. He recorded nine tackles in his final Big Game to retain the Axe. 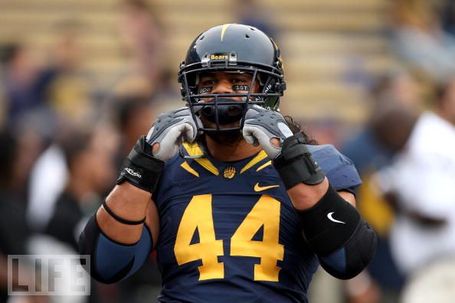 I don't know when exactly I knew Tyson Alualu would be Cal's greatest defensive linemen of the decade. Maybe it was against Arizona in 2007 when he recovered Thomas DeCoud's forced fumble. Maybe it was when Dennis Dixon threw a pass right into his hands in that still surreal 2007 game in Autzen. Maybe when he recovered that fumble against USC to keep things from breaking open. Or maybe that he was just there for his first two seasons when other guys got injured or battered on that frontline. He played in all of his first 26 games. He would play in his last 26 too.

And those final 26 were full of vintage Alualu. He commanded double teams to open up the linebacking corps in 2008, and when he got single coverage he'd dominate his side of the field. He'd rack up 62 tackles in 2008, and when everyone knew he was the best defensive end in the Pac-10 and went out of their way to subdue him, he'd rack up another 65 more (those are the two highest tackle amounts by a Cal defensive end in 15 years by the way), including 11.5 tackles for loss. To get that many tackles while commanding that much respect says a lot about how great you are.

Plenty of performances come to mind with King Tice. He pressured Jeremiah Masoli and Kevin Craft quite a bit in back-to-back games in 2008. He dominated the final quarter against Minnesota in 2009, forcing Adam Weber to throw some backbreaking interceptions, sacking him another two times and tackling him another two times for a loss. He played surprisingly well in the Autzen Massacre; you could reasonably argue he kept Oregon from hitting 50 points. He stepped up his game when our other defenders struggled to elevate theirs, having his best individual performances against Oregon State 09, Washington 09, Maryland 08.

He was the hardest worker on our defense the past three seasons, and we all know how much it paid off last month. Even in the unlikely chance you don't meet the lofty standards of the Jags, Tyson, just wanted to let you know you exceeded ours. Thanks.