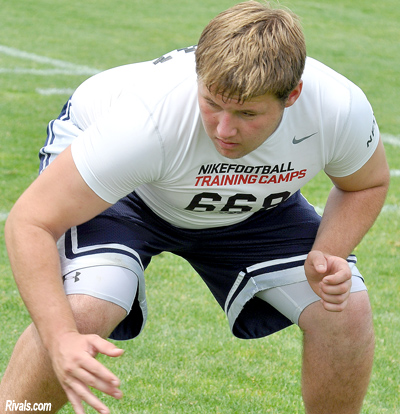 Jordan Rigsbee is your fourth pledge of the Cal 2011 class (HT MinerNiner).  One of the most talented offensive lineman recruits from the state of California, Rigsbee chose to join his brother Tyler upfront at Berkeley over the blue turf of Boise State. He texted his intent to commit to Coach Tedford after having an outstanding Berkeley All-American Showcase Camp.

"The things I look for in choosing a program are your position coach," said Rigsbee, "because that's who you're going to spend a lot of time with- along with the rest of the coaching staff. Also, the guys on the team and the talent they have, a comfortable feeling with the program and the school itself are important, because you can't play football forever so you want to consider the value of your education."

"I'm not going to rush into my decision but I do think I'd like to make my decision before my senior season for a couple of reasons," added Rigsbee. "First of all, I'd like to be playing football my senior year not worrying about other things. I also know that coaches need to make their own plans, too." - ESPN On the trail

Rigsbee came in to the camp as potentially the top offensive lineman in the state and lived up to the hype. He plays through the whistle and was easily the most physical lineman in the camp. - Greg Biggins, ESPN

“My trip to Berkeley went real well,” Rigsbee said. “I really enjoyed seeing the construction site where they were going to build their new weight room and stuff like that and I really like (offensive line) coach (Steve) Marshall."

“He was a real personable guy and easy to talk to. It didn’t seem like you were talking to some big coach. Coach (Jeff) Tedford was a really good guy so that was good, too.” - Adam Gorney, Yahoo!

"Coach Tedford said to Jordan, 'we want you to know that you're a great football player in your own right. There's been lots of younger brothers or sons of Cal players that we loved but we just couldn't offer a scholarship to. But we think you're a very good football player and we want to you know that we have a place for you here at Cal.'"

"Jordan came into the recruiting process saying that he was going to blaze his own trail and do his own thing so it wasn't clear he'd just follow his brother to Cal."

"But then when he came out to Cal for their Junior Day, and it was just about him, he said, 'Wow, this is even better than I expected. This is way cooler when it's about me. I just can't see myself going anywhere else.' He's just so comfortable there and likes the coaches so much there." - BI

"I had in my mind that I wanted to have my commitment made by the end of the summer, but I went to a one-day camp at Berkeley on Sunday. I made up my mind then," Rigsbee said. "This felt like the right time. I've gone to all the schools and looked at everything and in the end Steve Marshall (Cal's offensive line coach) made me feel comfortable with the program at Cal. We have a good relationship, he's a lot like me — fiery and a fun guy to talk to. ...The environment and the school are great. Academically, Berkeley is just one of the best in the country and playing in the Pac-10 will be an incredible experience. If the expansion goes through, it could become the super conference of the nation, and it would be really fun to play against schools like Texas and Oklahoma."- Chico Enterprise Record

"I was laughing about it the other night," Craig said. "From a logistics standpoint, it's going to be easy for me to see them both play now. We're really excited about that. Personally I think it would be really cool to watch them line up next to each other." - Chico Enterprise Record