Just another day of work for our Golden Bears in the Pros. 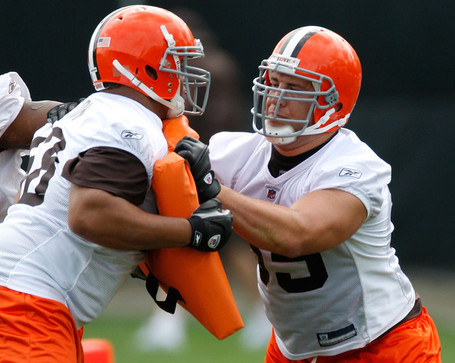 Orange & Brown Report checks up with Alex Mack, who has been excelling at OTAs after a solid freshman campaign (HT Kodiak):

The respected website profootballfocus.com tracks every player on every play and ranked Mack as the sixth most efficient center in the entire league in 2009.

"I think that the experience that he got last year is fantastic," Mangini said. "To be able to start 16 games as a rookie is really hard to do, especially at that spot. Center is often underrated in terms of how much information they have to process and how important they are to setting the whole protection, the front, the running game.

"It’s critical. He did a good job with it and I think he got better as the year went on. Now, what you’re looking for is to avoid a sophomore slump, to build on the lessons of last season. He’s a lot more comfortable, it’s just different. They’re all more comfortable now."

After the jump, learn what an NFL legend has to say about Aaron Rodgers, a scary ride for Tony Gonzalez, how Justin Forsett is elusive and efficent according to the numbers and the analysts, and how Scott Fujita is just impressive. Also, more reports on Desean, Pain Train, O'Callaghan, Alualu, Craig Stevens, Lorenzo Alexander, and others.

Berkelium already let you know about Forsett's prospects as a starter, and daveman let you know about how elusive Justin is in the pros (answer: VERY elusive). Field Gulls's John Morgan (one of the best football writers at SB Nation, check him out if you want to know anything about the Seahawks) is very complimentary of the Force.

Seattle succeeded when Justin Forsett ran the ball. Which is a wonder, given the overall quality of Seattle's offense. In fact, by a general measure of effectiveness, Seattle's top two backs, Forsett and Julius Jones, outgained Beanie Wells and Tim Hightower 157 DYAR to 81 and outgained Frank Gore and Glen Coffee 157 DYAR to 34. Forsett was the more "valuable" of the two, accounting for 122 of Seattle's rushing DYAR. There's a perception that Forsett was valuable because he was used as a change of pace back, but that doesn't really hold up to scrutiny. The four games he carried the ball 10 or more times account for 397 of his 619 total yards, and Force averaged 6.3 yards per attempt in those contests. The opposing defenses ranked 14, 32, 5 and 26 in rush defense.

So, Force isn't tall, but that doesn't matter. Force is a little light, but because he's short, he's not that slight. His BMI, 29.5, compares closely to Edgerrin James, 29.7, Curtis Martin, 29.3, and Fred Taylor, 30.1. James, Martin and Taylor are all contemporary players that have amassed over 10,000 rushing yards. If Force has a problem, it's that he has a bruising style and big or small, contact takes its toll. So you probably don't want to give Forsett more than 200-250 carries a season, depending on usage and health.

Fujita continues to give back.

The former New Orleans Saints linebacker donated $12,500 — half of his Super Bowl earnings — in April to America's WETLAND Foundation to support coastal restoration plantings in Louisiana's marshes. In the wake of the devastating Gulf oil spill, Fujita is again teaming up with AWF, this time in launching a text-messaging drive to raise funds to support volunteer planting and restoration projects following the oil cleanup.

He also talks about equality for the LBGT community and how his upbringing taught him to be tolerant of all peoples.

Former New Orleans Saints linebacker Scott Fujita, now playing with the Cleveland Browns, has been doing something extraordinary for a professional football player in the prime of his career: he has been speaking out for LGBT equality.

Straight allies are critical to the LGBT equal rights movement and when I talked to Scott recently, I wondered what made him decide to be an advocate.

"I have a unique family history," he explained. "My parents went through internment camps during World War II and there experience has taught me to stand up for the rights of everybody – equality across the board regardless of what the issue is. This issue has come alive has come alive in the last couple of years and it’s been important to me because equality to me is the most important thing."

Lorenzo Alexander is wowing the Redskins.

Alexander also has played defensive end, as well as tight end and guard on offense, in addition to his contributions on special teams. But it seems he could be an integral part of the linebacker rotation this season. Through the first two minicamps and two sessions of organized team activities, Alexander has excelled in every facet of his new role.

"He's been awesome. The guy's awesome. The guy's unbelievable," defensive coordinator Jim Haslett said Wednesday at Redskins Park. "He's a better athlete than I would have ever guessed. If you'd told me last year he played three technique, I would have never guessed it.
"If you said he played linebacker, I would have said he played linebacker. He's 275 pounds. He's ideal size for the position. He's got good rush ability. He's unbelievably smart. He's tough as nails. I love the guy."

One of Green Bay's greatest weighs in on whether our main man Aaron can enter the territory of great Packer quarterbacks.

"I think the (chances) are excellent, not pretty good," Starr said. "I think he is an outstanding quarterback, and they're getting an even stronger team around him. I like his style, just everything about him. I think he executes the system, how they run their offense. I'm thrilled that they've gotten some offensive support around him. I think he's going to be a great quarterback."

Starr, who played for 16 seasons in Green Bay, was inducted into the Pro Football Hall of Fame in 1977. Rodgers enters his third season as a starter for the Packers.

Desean Jackson is taking a very proactive role in the Eagles organization, emerging as one of the team's best leaders, and is approaching contract negotiations a lot more differently from fellow Class of 2008 NFL superstar Chris Johnson.

Just 2 years after falling into the middle of the second round of the draft because of character and work-ethic questions, the Pro Bowl wide receiver is rapidly developing into one of the locker-room leaders of a young Eagles team that has just one non-kicker over the age of 29 on its roster.

Jackson, who earned his first Pro Bowl invitation last season and scored 12 touchdowns as a receiver, runner and return man, hasn't squawked once about his contract.

He was a regular participant in the team's offseason conditioning program and is expected to be front-and-center next week when the Eagles commence 8 days of full-squad OTAs before their vacation break.

An Eagles executive said Jackson has been one of the most active players on the team this offseason with respect to charity work and appearances. He was one of three players, along with tight end Brent Celek and linebacker Stewart Bradley, who were on hand earlier this month at Franklin Field when the team unveiled plans to honor the 50th anniversary of the 1960 Eagles championship team.

"We are appreciative of his work ethic and attitude this offseason, and we look forward to him having a long and successful career as an Eagle," said general manager Howie Roseman.

Craig Stevens will try to replace Alge Crumpler's shoes as the best tight end blocker for the Titans.

"Alge had blossomed late in his career to become such a solid blocker for us, but Craig through all of this was equally up to the task,'' Titans tight ends coach John Zernhelt said. "What probably gave the edge to Alge was his experience.

"But Craig, mentally and physically, we feel real confident with him. … He is a solid blocking tight end for us. We're a team that runs the football and so we feel comfortable that he can do what we ask of him this fall.''

The 25-year-old Stevens, a third-round pick in 2008, considers himself fortunate to have been able to watch Crumpler on a daily basis over the past past two seasons.

"He just used his body so well and he knew the game so well,'' Stevens said. "He's so smart. He could really anticipate things. Alge was a great role model, a great leader. I learned a lot from him and I'm looking forward to competing to be the guy (that replaces him).''

Zack Follett is impressing his way up the depth chart in Detroit.

"He's a lot further along than he was last year, particularly at this time," Schwartz said. "Zack played at outside linebacker in a 3-4; he was essentially a defensive end when he was in college. And it was a big adjustment for him playing off the ball; essentially a position change for him last year."

"He's taken the next step. He's had a good off-season this season. He's a lot more comfortable playing behind the ball. He worked really hard on the scout team last year to try to get a lot of that work, and it's showing right now."

Rest of the Golden Links

Field Gulls: John Morgan is high on Brendon Mebane, and very low on the depth of the Seahawks defensive tackles.

Desmond Bishop will be participating in an NFL camp with host Jarrett Bush for kids 7-12 June 12th, and kids 13-18 June 13th at Vacaville. Sign up your kids now!

Andre Carter talks about comfortable he feels in the Redskins 3-4.

A make or break season for Lavelle Hawkins. Also, Hawk and the Titans aided in the Nashville flood relief effort.

Tony Gonzalez did not have a pleasant plane trip back to California. But he did Tweet about it, so it's all good.