Welcome to one of the most inglorious positions in all of sports. You can't really measure the value of the guys who play this position by their stats. Their value is measured in the blocks they throw to open up the running backs or protecting the quarterback, with occasional moments of glory.

Additionally, every one of our fullbacks on this list was a walk-on. Again, much credit to Ron Gould for finding the best of the lot. 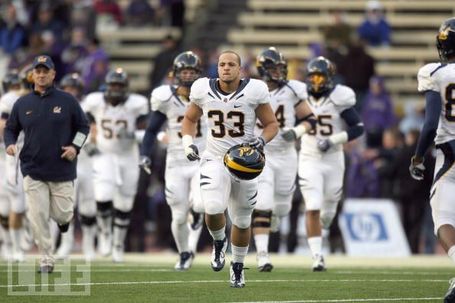 Holley wasn't the most talented fullback--he was a little too diminuitive to be a capable blocker for the majority of snaps. Still, he acquitted himself alright throughout 2009 in our victories, and had a solid Big Game performance to make sure Shane Vereen got good enough lanes. And everyone on the team loved his energy, winning the Dink Artal Award for Cal spirit.

Also, he's finishing up his Senior Thesis on "Cognitive Dysfunction & Cultural Violence in American Football" (what a grimly appropriate topic for this season). So it's safe to say he's going to have a good career outside of the game.

Note: We're scrapping the Google Forms for this series. Just use the comments to rank the fullbacks or add any additional anecdotes or favorite moments concerning these players. We will still be using the feedback and your rankings in posts and comments to determine the CGB All-Decade Football Team. 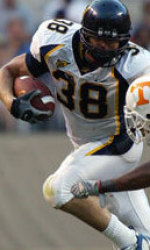 People will often forget about Byron Storer in between the eras of the two best fullbacks of the decade, but Storer played fairly well as the starter in 2006. With Desean, Jordan, Hawk and Stevens all ready to catch and Marshawn and Forsett ready to run, he didn't see the ball much on offense, but he did block well enough on a team with inexperienced offensive linemen. Cal dipped from 9th to 35th in rushing YPG, but only 3rd to 13th in rushing YPA. So with Storer and young Ta'ufo'ou, the difference wasn't that discernible.

Just like with most of the fullbacks on this list, he put his focus on understanding the game.

"It's something you do for yourself," Storer said. "I think the game of football teaches you lessons way beyond the field. Learning to be a leader helps you to become successful in life. There is no substitute for learning how to be a good leader."

And that is just what Storer has become, a team leader who emphasizes that it is important to find success outside of football, too. The mass communications major will graduate this fall, and he stresses to his teammates the importance of doing well in the classroom, as well as on the football field, distinguishing himself by earning Pac-10 All-Academic honors each of the past two years.

To Storer, this California football program is more than just a team, it's a family, and he is very committed to seeing them all succeed.

"I feel like I have 105 best friends on the team," said Storer. "With the coaches, it's like having 10 dads. I have been truly blessed with the people I've been surrounded by at Cal."

Interestingly though, his biggest contributions for the Bears would be on special teams, winning all-conference honors there two years straight. 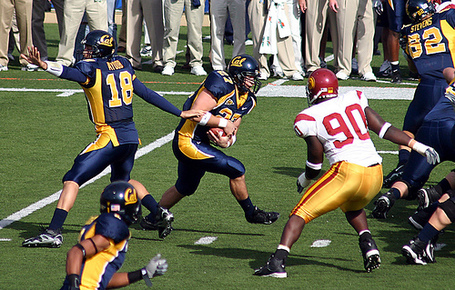 Another tough battle for first place on this list. Manderino was probably the most talented of the Bears and the most pro-suited of all the guys on this list. He was a four year starter, a rare honor. He was money on short down situations--Rodgers would often throw to Manderino to get that 3rd and short, something Cal hasn't gone back to.

We can't ignore his blocking though. With the power run schemes in place and with the help of monstrous offensive line, he helped unleash Igber, Echi, Arrington, Lynch, and Forsett.

Here's a quote from an interview Manderino did with SBN's Arrowhead Pride when he was with the Chiefs.

As a fullback you must take a lot of pride in what you do. You have to be physically and mentally tough and you have to find joy in doing your part to contribute to the ultimate goal of WINNING. As a fullback, I am motivated by seeing my running backs excel. When they have great games and seasons, it usually means that I have done a good job in helping them attain good statistics. Also, as a fullback, you encounter many one on one matchups. I am motivated by competition. Each play, I am motivated to compete against my opponent and to dominate him so that he does not make a play on the ball. Mostly I am self-motivated. As a fullback, I have a job to do just like everyone else on the field.

In case people were wondering what Chris was up to, he was playing in an Italian football league the past season--you can check up with him on his personal site. 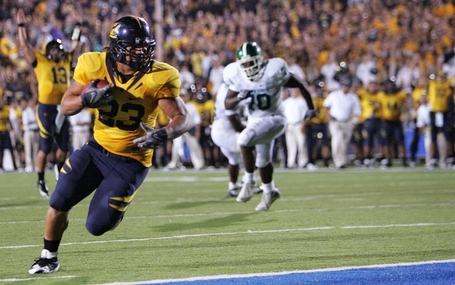 In this case though, we reward the guy with the better overall season. Ta'ufo'ou's 2008 campaign was legendary. He freed up Jahvid Best for some monstrous games against decent competition. Take a look at the difference between Best's 2008 and 2009 campaigns, and you can probably see how much Will was missed.

Also, Will was probably underutilized as a pass catcher and rusher simply because his offense wasn't as good in 2008 as any of the offenses Mando got during his four years. We needed Ta'ufo'ou solely for the blocking because the offensive line struggled in many a game against good competition. Will was so good, Jahvid considered him his favorite player to watch. Hydrotech articulated how much he appreciated him.

I wish Will got more TDs, or at least got more touches He was such a tireless worker and never complained. He did his job, did his job well, and was a team player. For all that he's done, I would have really liked to have seen him rewarded with more TDs or perhaps a few more carries. But of course, if Will was running with the ball, then we'd have one less blocker out on the field, and one less great blocker. So the fact that Will got so few carries makes sense, although I'm sure we all wish he got a few more touches.

Ta'ufo'ou did more with less. That's why he was number one on our list. It's close though.