Share All sharing options for: Ranking The Big Games Of The Decade: #4 2004

It is an undeniable Newtonian law of Cal football that for every action, there is an equal and opposite reaction.  The happier and happier Cal fans feel, thus, the more emotionally crushed we have to be.  The 2004 Big Game, as part of the 2004 season, was the most perfect example of this law of physics.  This 2004 Big Game was perhaps the peak of happiness Cal fans have ever felt!  So, it was just a matter of time before that joy was torn from us.  Before get to that damnable apple falling on our heads, let's focus on the Big Game, first.

In CalBear81's amazing post on the 1898 Big Game, she noted the following facts regarding the state of the Cal running game during the game.

Many, many, many things had changed 106 years later.  We had the cars, the internet, and fewer pledges by Cal students to forgo neckties in case of a Cal victory.  One thing hadn't changed:  The bruising Cal rushing attack.  While Percy Hall and Warren "Locomotive" Smith might have paced the Cal attack in 1898, in 2004, J.J Arrington and Marshawn Lynch led the way:

And freshman Lynch put his own stamp on the game, carrying nine times for 122 yards -- including a thrilling 55-yard touchdown run in the third quarter.

During the Big Game, Cal had over 300 yards rushing and ended up cruising to a 41-6 victory over those gosh darned Stanford lobster backs!  Still, despite these gaudy numbers, nothing appeared as it seemed.  Let's take a closer look at the 2004 Big Game.

I say peak of the 2004 season, because, as usual, Cal can't have remarkably success without bone crushing sadness.  And what success Cal had!  2004 might have been the most successful year for Cal football ever.  Going into the Big Game, Cal was 8-1 and in its 8 wins, Cal had never scored less than 27 points.

In one week, it shut out the state of Arizona, beating the Wildcats 38-0 and then, one week later, the Sun Devils 27-0.  In 5 of those 8 victories, the Cal offense scored over 40 points.  Aaron Rodgers was leading a relentless attack with J.J. Arrington pacing him.  There were only 2 causes for concern going into the Big Game:  Oregon and USC.

First, Oregon.  They had given Cal one of its toughest fights to date.  Cal was coming off of its weeklong shut down of the Arizonas and was appearing before a national ABC audience with the assuredly salivating Dan Fouts.  It did not get off to its best start:

Cal's defense posted consecutive shutouts for the first time since 1968 in its last two games, but Clemens and his teammates embarrassed the Bears' defenders with 302 yards in a commanding first-half performance.

The Ducks scored 20 points in 2:24 midway through the first quarter, twice getting good field position from Cal special teams mistakes.

Oregon went ahead 27-14 late in the first half on a 73-yard drive capped by Marcus Maxwell's 7-yard TD catch, but Rodgers and McArthur connected twice on a 75-yard drive in 85 seconds shortly before halftime.

Note that Oregon was up 27-14 and not 28-14.  That is because they missed an XP.  A measly XP.  But certainly that wouldn't come back to bite them, right?  Right?  When Cal got up 28-27 on another Geoff MacArthur TD grab, it looked like Cal would hold on.  However, Oregon was driving right into field goal range.  On a crucial fourth down play, this occurred:

Cal dodged a major bullet when Oregon's Keith Allen dropped a wide open pass that would have put Oregon well into field goal range.  Whew!  Go Bears!  So, that was the Oregon game.  A classic game that ended in a win.

Speaking of another classic game, there was also the USC game, which was not quite so amazing.  USC was looking for revenge after getting upset in the Triple OT classic in 2003.  That game had put Jeff Tedford and the new UC Berkeley program on the map.  But that was then.  This was now (odd to say that in the past tense, isn't it?).  On a day when Aaron Rodgers was nearly perfect, Cal was 9 yards away from another upset of the eventual national championship Trojans.  I'll spare you the emotionally devastating results of this game.  Needless to say, Cal hung in tough against one of the best college football teams of the decade. 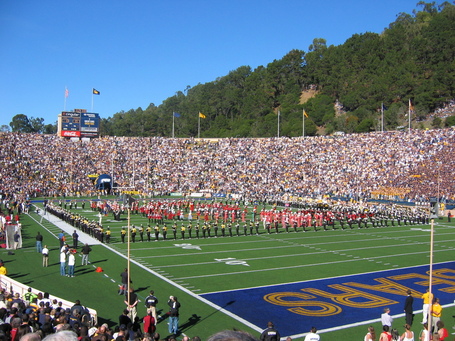 So, heading into the Big Game, Cal had a dominating offense and a dominating defense.  It had crushed most comers and nearly beat the eventual national championship.  Cal was clearly one of the greatest teams in the nation.

Stanford was not.  After starting 4-2 on the season with a remarkably close loss to USC, Stanford lost 4 in a row.  Heading into the Big Game in 2004, Stanford was now 4-6 and the early season momentum was completely lost.

Looking at the numbers, it looks like total domination on the Cal side:

Cal had 474 yards to Stanford's 180.  Cal held the ball over 10 minutes longer the Stanford.  Stanford had 30 rushes for 24 yards.  Ouch!  Of course, it helped that Cal sacked crash test dummy T.C. Ostrander 6 times.  6 times!  Plus, Ryan Riddle and Tom Svercheck each had 2 tackles for loss for a combined 39 yards of loss.  Cal D definitely doing its job, even if the offense took a while to get going.

Perhaps the most important stat was the penalties.  Cal had 12 penalties for 102 yards.  Stanford had 14 for 126, too.  But the Cal penalties kept them from really taking over the game.

It was not until there were a few minutes left in the 3rd that Cal really started to pull away.  Up 13-3, super duper awesome freshman Marshawn Lynch broke free for a harbinger of things to come:

Well, wasn't that fun.  That put Cal up 20-6 and from there, they were off to the races.  In the 4th quarter, the following occurred:

JJ Arrington scores a TD and then the fireworks.  Marshawn throws a TD pass to Burl Toler!!!  Then, a clear signal that the rout is on, Reggie Robertson, the backup QB runs in for a TD.

With all the rushing, Aaron Rodgers really didn't have to do much:

When the clock struck 0, fans rushed the field, hoping against hope.  Anticipating something which had not occurred in decades.  That's when it all fell apart.  Cal "only" beat Southern Mississipi by 10.  Mack Brown begged for mercy on TV.  I kicked a dog.  An injured and dispirited Cal team got crushed in the Holiday Bowl.  It was, after all, the first law of Cal physics, for every action there is an equal and opposite reaction.  For the great happiness of the 9-1 start to the season with a bruising defense and an even more bruising offense, it was only a matter of time before the happiness had to be stripped from us in the most devastating manner possible.

However, on November 20, 2004, for one shining afternoon, a Cal team achieved yet another Big Game victory and us fans dared to dream.  GO BEARS!