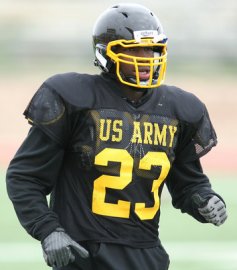 If you were to pick the member of this recruiting class that you would immediately point out as "the most typical Golden Bear in the field", Nick Forbes is probably your man. Forbes had academics high on his mind before making his decision about where to go to college; that he ended up in Cal is a testament to that desire.  Intelligence is what radiates through all the various interactions we've seen from him--in the media, in the recruiting sites, even with us. The kid just seems so ready for college that it seems inevitable that he'll be contributing on a football field very very soon (if not this year, almost certainly next)

Tale of the Tape: ttgiang15 resident tape expert, tells the tale. (from Nick's own YouTube channel!).

Projection: Think more athletic Worrell Williams with a slighter frame. Forbes' most effective playing weight would be 235-240, or needs an additional 10-15 lbs. Difficult to dissect weaknesses, because he's so polished and plays such sound football. In some ways, his sophomore film for defense is more impressive than his junior tape. In the former, he is much more disciplined, maintains better form and technique throughout. That's not to say his later highlights are any worse, because he does show greater maturation in his reads and more explosiveness (the game has slowed down to him). I personally favor middle linebackers who have played running back extensively in high school (Dave Wilkerson also), because they are more natural at reading O-line blocking schemes and running back cutback lanes, as well as making play on balls. Probably the most mentally prepared among the linebacker recruits coming into this season. Right now, you can pencil him in as a future Pac-10 Honorable Mention player, but his upside depends on his ability to stay consistent--not unlike the predicament faced by Worrell.

The key word there is intelligence--being able to read blocking schemes on a consistent level is very important to shutting down opposing rushing offenses. Definitely key to playing the inside in the Pac-10 is learning how to maintain gap discipline to keep the conference's fastest runners from breaking out and away. If Forbes can show that capability early on to sniff out where the back is going based on where the line is blocking, he could be ready for the rotation (our current crop, while they have their moments, aren't consistent enough to be that good).

Although Martin could be the more talented and bolder Golden Bear, Forbes might be the most important player in making sure the linebacking corps reaches its full potential. Without the middle backs holding their end of the bargain, the outside guys will be caught scrambling, so it's key that he adapts quickly to his surroundings right down the pipe.

Playing Time: Several linebackers will keep Forbes from seeing the field much in 2010. Michael Mohamed, D.J. Holt and Mychal Kendricks are all slotted to be competing on a daily basis for the two inside spots. Chris Little's dismissal will leave the Bears thin on the outside though (with Keith Browner the only constant pass rushing option), so it's possible that with one of those three having to play more on the exterior, it opens up Forbes to see the field. Our best middle linebacking prospect, he'll probably get his chances to make it up on the inside. We'll see how much trust the defensive coaches

With Mohamed departing in 2011, look for Forbes to make his move to vie for the permanent starting position.