Share All sharing options for: United States vs. Ghana Gamethread

Lando Can't-miss-ian and the rest of the cardiac yanks are taking on the formidable men from Ghana.  Hit the jump to take a look at The Black Stars.

Ghana vs. USA should present an interesting dilemma.  The United States is big on early defensive lapses that allow early goals.  Ghana, on the other hand, has yet to score a single goal during open play.  Irresistible force, meet immovable object!

To be frank, Ghana is extraordinarily lucky to still be playing.  A mind-bogglingly bad handball gifted them a penalty kick goal against Serbia.  To be fair, they almost certainly would have had a good goal from open play against Australia if an Aussie didn't stop the ball at the goal line with his arm.  But after that red card Ghana had 66 minutes to break down 10 man Australia and failed.  That left them in the perilous position of relying on Australia to beat Serbia, which the Socceroos barely managed to do.

Having said all that, Ghana isn't an opponent to take lightly.  They have only allowed two goals thus far - one a rebound from a shot that usually sure handed goalie Richard Kingston uncharacteristically fumbled, the other a distance strike by Mesut Ozil that must count amongst the best in the tournament.  The basic message:  Ghana is a tough, disciplined side that does not concede goals easily.

The key battle will be midfield vs. midfield.  Landon Donovan, Clint Dempsey and Michael Bradley have all been excellent thus far.  They've been winning balls, passing well, getting back on defense and generally facilitating the US attack.  But Ghana's strength is in the midfield as well.  Kevin Prince-Boateng, Anthony Annan and Kwadwo Asamoah trying to get the ball to lone striker Asamoah Gyan.

For more in depth previews check out the following links:

Yet while Ghana created plenty of offensive chances in the group stage, their finishing was brutal.  Shockingly, they are second in the tournament with 55 total shots (the United States sits third at 49), though a rather pathetic 14 have been on target. . . . Instead of relying on possession (as a team with five midfielders might presumably do), they tend to sit back and absorb the pressure centrally, relying on quick passing in the center of midfield when they regain the ball.

What to watch for from Grant Wahl:

Two of the most promising young players of this World Cup will be going head-to-head in the central midfield: Ghana’s Kwadwo Asamoah, 21, and the U.S.’s Michael Bradley, 22. Asamoah, who plays for the Italian club Udinese, was the breakout star of the 2010 Africa Cup of Nations, leading an Essien-less Ghana on a surprising run to the final. Meanwhile, Bradley (who plays in Germany for Borussia Mönchengladbach) has emerged as one of the young stars of the World Cup, running off three straight sterling performances as the U.S.’s destroyer and midfield engine.

The key is probably the extent to which the U.S.' creative players, Donovan and Dempsey, can be brought into the game. Overlapping runs from the fullbacks could create space -- although they must be wary of granting Ayew or Tagoe/Muntari space to advance into, but -- once again, thanks to the string of dogged opponents the U.S. has faced -- it may come down to whether Michael Bradley and his midfield partner can impose themselves and find the range of passing to circumvent Ghana's central midfield trio. 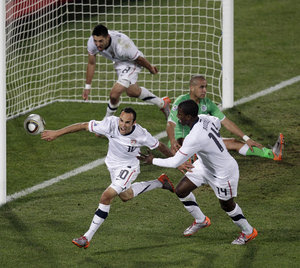