The most remarkable Golden Bear athlete this past season wasn't Jerome Randle or Jahvid Best. It was Jill Costello, our Cal women's crew coxswain, who underwent a perilous senior season to help lead her team to unbelievable heights. Costello, who was diagnosed with Stage IV lung cancer last offseason, recently lost her battle with the disease. She was 22.

However, even if she's no longer with us, her mission in life still lives on. If you want to help assist in the fight against lung cancer, you can donate through her CaringBridge blog or go to Lung Cancer Foundation (where Jill had been working for the past year as Director of Public Awareness) and learn how to help. Team Jill has raised over $65,000 over the past year to find a cure for lung cancer, and we can only hope CGBers will be willing to add their totals to the cause. If you would like to express your condolences, please go to her Guestbook and leave your sympathies for her family.

After the jump, here's a brief summary relating to Costello's remarkable final year, including some beautiful videos of the Cal community rallying around her during her amazing run.

Her grim cancer prognosis did not stop her from having a remarkable final season. She remained in charge of the Cal's women's crew team, leading them in the water or inspiring them out of it when undergoing one of her many chemotherapy treatments. The women's crew team renamed themselves Team Jill and rode in her honor.

Jill's "Got to Do It" Video (via CalCrewTV)

Outside the athletic fields, she completed her Cal education, earning her bachelor's degree in political economy, finishing with a 4.0 GPA her final semester. She won the Joseph M. Kavanagh Award as the most inspirational athlete. She was a second-team Pac-10 academic All-American.

Most importantly, she was a staunch advocate for pursuing research to fight and find a cure for lung cancer. She would make several trips to Genentech and give talks about lung cancer, making the plea for the company to pursue drugs that could possibly kill the disease in its tracks (check out her TV interview with CBS 5 this past month). She cut off her hair for cancer patient wigs. One of her professors raised $40 per point for each one of Cal's 93 points against Washington last February, writing a $3,720 check for the cause. She visited Lourdes, France on a pilgrimage (a place where miracles have been reported to happen) hoping for her own special healing. She never gave up hope and never lost her optimism throughout her ordeal, moving forward and skying upward in furthering her causes and achieving her goals.

In her final post, she did make a big announcement that you could all help in participating for!

On September 12, 2010, The Foundation is having a 5k walk/run in Golden Gate Park inSan Francisco, California and I am inviting all of you to participate in my honor!

I have registered ''Team Jill'' and you are now welcome to join. This way we are all registered together.

Hopefully as many Golden Bears can register as possible (fundraising goal is 25k and we're at 4k!). Let's help surpass that!

It's a very sad day for Golden Bears everywhere, but she lived the past year with great joy and effervescence, and I hope we celebrate her life as much as we mourn her passing. Raise awareness to others, donate through her site or to her foundation (Donations to the Bonnie J. Addario Lung Cancer Foundation may be sent to 601 4th Street, Suite 215, San Francisco, CA 94107), register for the event in Golden Gate Park, do what you can to honor Jill or keep her fight going. 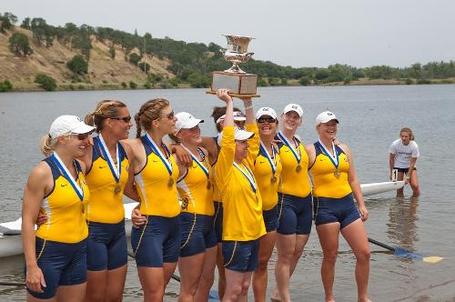