Share All sharing options for: Greatest Cal Offensive Linemen of the 2000s

This series of lists would be incomplete without discussing the mainstay of any successful college football team, the offensive line. And Cal's O-line (no, not the quarterback, the offensive line), behind the solid coaching of Coach Jim Michalczik powered our offense to the pinnacle of the Tedford-era teams.

This is one of those posts where I feel horribly inadequate in discussing any of these people. I still know only the rudimentary details about blocking, schemes, and techniques our linemen used (and I didn't watch half of these guys), so it's hard to judge who the best linemen were for our teams by any individual measure.

Oh well. Here we go. Vote for your greatest Cal O-linemen of the decade in the poll and discuss who it should be in the comments!

We downgrade him a little because he was stuck on those horrible Holmoe teams and didn't really do enough blocking for Kyle Boller, but there was no denying the raw talent of Langston Walker.

Walker got drafted in the second round by the Raiders after that awful one-win season (making you wonder how terrible the coaching was to have a quality tackle and get NOTHING out of it) and has played eight seasons in the NFL for the Raiders, BIlls, and Raiders again. Although he could never max out his skills as a Golden Bear, his talent has kept him running for over a decade in the pros, which has to be acknowledged.

Mark Wilson was surprisingly a more successful tackle during his time at Cal (although some of that could've been attributed by the massive upgrade in coaching). Wilson had the more productive college career, starting all 48 career games at Cal, earning All Pac-10 honors in 2003. He's journeyed around the NFL, but injuries have kept him off the field. Wilson's good college career and Walker's long pro career place them both in the tie for fifth. 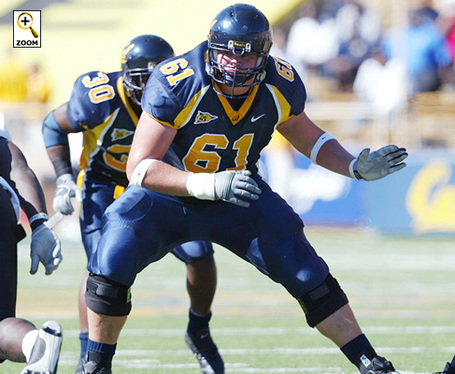 I have to be honest, I was very surprised to see O'Callaghan this low (Hydro and I voted him 2nd, the rest of our team placed him much further down). I guess his unsuccessful pro career up to this point has something to do with it, but seriously, the best guy on our best offensive lines goes fourth? I guess that's why we're letting you decide afterward... 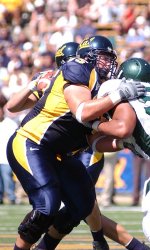 Had 41 pancake blocks during that remarkable two year stretch for Cal football. He was second-team All Pac-10 in 2005. He was arguably the second most valuable linemen involved in the running game, as he broke things open for Arrington, Lynch and Forsett to break to daylight dozens of times during that incredible stretch (final numbers from 2004 to 2005: 5904 yards, 246 yards per game).

(Yeah, this is the point where I just read lists instead of pretending to have any anecdotes or nuggets of wisdom about our offensive line pre-2007. My concept of Cal football in 2005 was "watch Marshawn go zoom".) 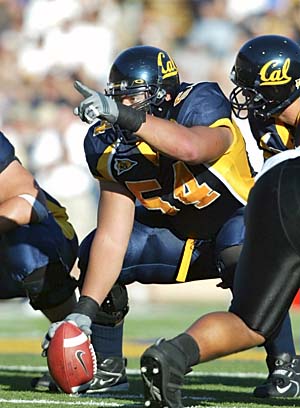 He was Cal's most valuable linemen in 2004, receiving the Brick Muller award for opening up the backfield. Rimington Award finalist in 2005 (for the best center in the country). Like the previous two candidates, 2004-2005 was Philip's time to shine, racking up 68.5 pancake blocks and 54 knockdowns is pretty much domination (not to mention he led the team in both categories in 2003). A worthy second place finish.

Unfortunately, he was only the second-best center for Cal this decade. 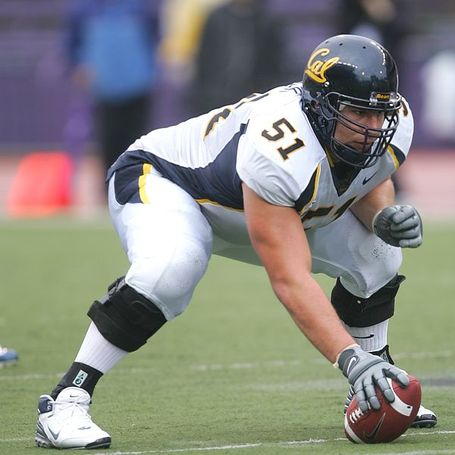 We've written about Mack a lot, so here are the honors: He won the Morris trophy twice (2007 & 2008), meaning defensive linemen feared lining up against him the most out of all the Pac-10 O-linemen two years running. He was a Rimington trophy finalist twice. He made a bunch of All-American lists, something that's very hard to do when fighting the Texases, USCs and Floridas of the world. And he won the Draddy Trophy, a true testament to his ability to combine athletic pursuits with academic excellence.

Considering how much more difficult Alex had it in keeping Cal's running game going compared to the other guys on this list (who got to work together and wreck mayhem on the rest of the conference), it wasn't too hard to put him number one. Well, that and the fact that he was also the most talented of the guys on this list.

Still, I'd go to war with this six man lineup in front of me.