When:  7:00 am PST, ESPN.  Also of note - England and Slovenia will be playing at the same time on ESPN 2.  Hit the jump for everything else you need to know about the make-or-break game of the tournament for the United States.

First of all, the facts.  Here are the relevant scenarios: 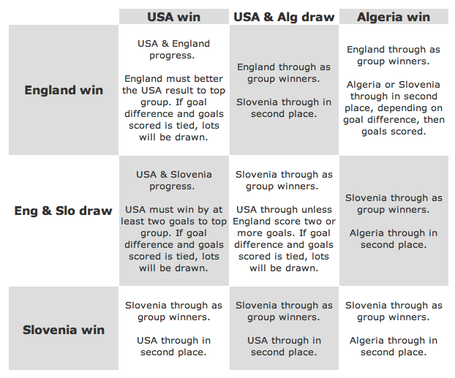 Obviously any scenario that ends with the United States in first place in Group C is a wonderful result.  That means rooting for England more so than Slovenia, though a tie is the best result.  It would almost certainly mean the US would avoid Germany in the first round, and would be placed in a section of the bracket that is lacking a true world power like Argentina, the Netherlands or Brazil.  But that's very premature seeing as the Yanks could be going home if they don't take care of business.

If you're interested in tactical breakdowns, check out the following links:

There’s an argument to be made that the United States should simply play to its strengths, which up until now has meant a traditional 4-4-2.  Yet with Robbie Findley unavailable due to his phantom yellow card, Jozy Altidore is without a natural partner up top.  Bradley could turn to Herculez Gomez or Edson Buddle, but the more likely scenario seems to be Clint Dempsey getting the call.

Stars and Gripes Keys to the Game

For all the tactical nuances that could come into play tomorrow in Pretoria, the match will hinge on the ability of the United States team to fight aggressively from the moment they take the field—and continue it for 90 minutes.  For the Americans, that means one thing: get Landon Donovan and Michael Bradley involved early.

Clint Dempsey's battle against Foued Kadir will be intriguing, but the key matchup should be between Landon Donovan, who has had a superb tournament so far, and Belhadj. The Slovenia left back is a natural attacking player, and if he can impose himself upon Donovan, forcing him back and making him stay wide, the U.S. may find itself lacking a creative edge. If Donovan gets the better of Belhadj, though, then Algeria's already limited attacking options are reduced even more.